In the final game on Saturday, South Africa faced off against minnows Namibia in a Pool B clash at the Toyota stadium.

Both sides came into the tie having lost their opening encounters in the tournament but the Springboks were favourites to win nevertheless. These two sides have met only twice before with both victories heading to the South African camp. Additionally, the Boks have won 20 out of 23 pool stage games at the Rugby World Cup and have also won 17 out of 18 games against non Tier 1 opposition. All signs pointed to a comfortable victory for the South Africans and so it proved to be.

END_OF_DOCUMENT_TOKEN_TO_BE_REPLACED

Four minutes into the game and South Africa had a potential try reviewed after Schalk Brits picked up the ball before proceeding to override a couple of tackles and cross the line but the effort was chalked off after a TMO review found that he dropped the ball before grounding it.

9 minutes in and South Africa got their first points of the game with a try. Mbongeni Mbonambi did the honours after a rolling maul and Elton Jantjies scooped up the extras to put up a 7-0 scoreline.

Five minutes later and the Boks would make their second mark on the match with yet another try from a rolling maul after a clean line-out. Francois Louw got the ball over the line and Jantjies missed the subsequent conversion.

17 minutes in and South Africa continued to extend their dominance on the match with Mbonambi grabbing his second try after yet another rolling maul. Jantjies converted to give them a commanding scoreline of 19-0.

2 - Mbongeni Mbonambi is the third hooker to score 2+ tries in a match at this year's @rugbyworldcup, it had happened just twice previously in the tournament's history before this edition (Keith Wood v USA in 1999, Phil Greening v Tonga in 1999). Flurry.#RSAvNAM #RWC2019 pic.twitter.com/ywlkchteWE

22 minutes in though and Namibia were awarded a penalty and a chance to get into the game. Cliven Loubser did well to convert as the Welwitschias grabbed three points.

END_OF_DOCUMENT_TOKEN_TO_BE_REPLACED

The Namibians' joy was short-lived though as the Boks restored superiority over the encounter with another try. The ball was worked out wide where Makazole Mapimpi collected to run past the line unhindered. 24-3 the scoreline read after Jantjies missed another conversion.

South Africa were in cruise control and the result seemed beyond doubt less than 30 minutes into the match.

South Africa had their hand firm on the tiller as the second half kicked off. 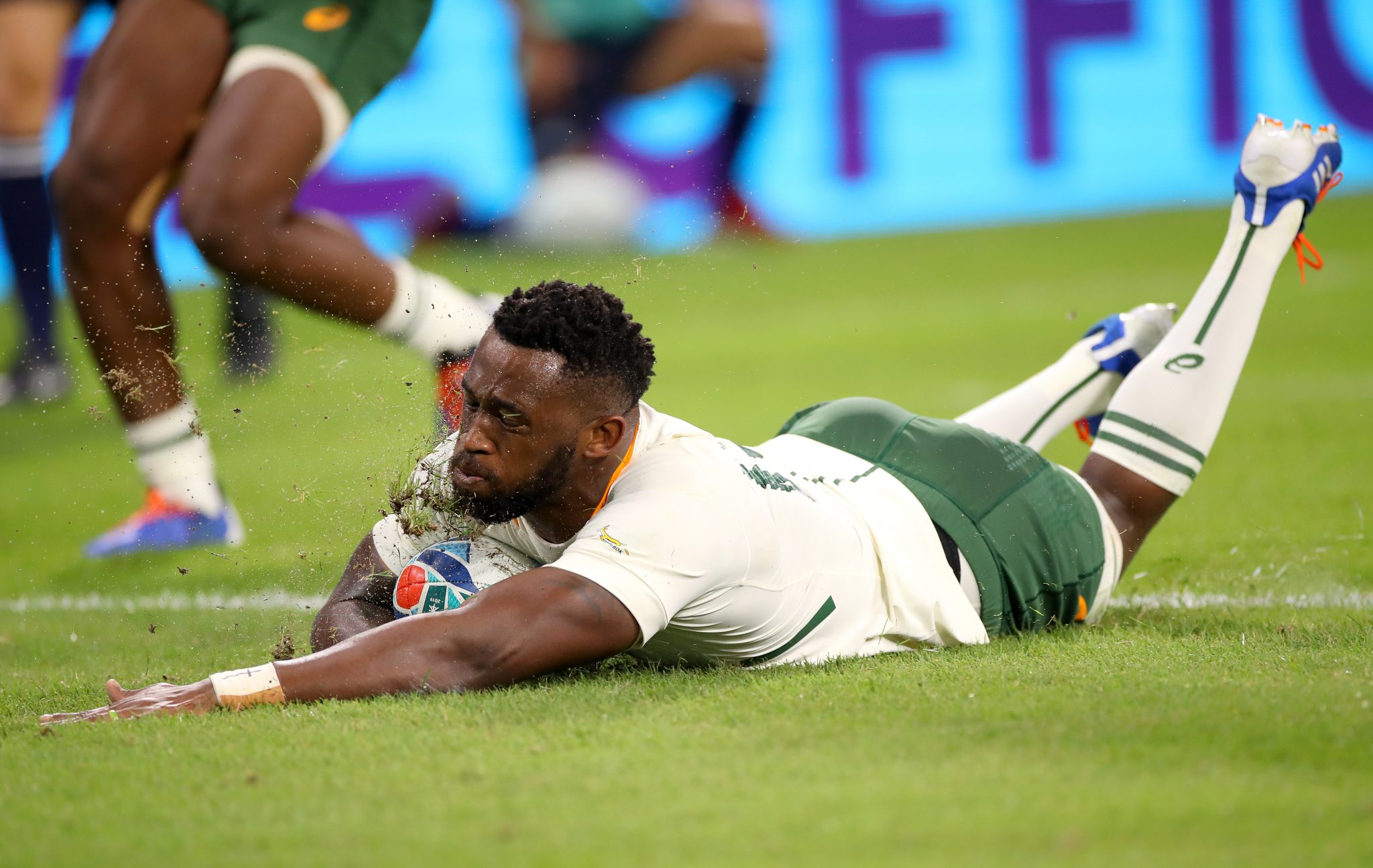 END_OF_DOCUMENT_TOKEN_TO_BE_REPLACED

47 minutes in and Warrick Gelant compounded Namibian misery after a brilliant one-two to score the Boks' sixth try of the match.

The South Africans looked absolutely ferocious whenever they stretched their legs and their opponents were paying the price.

53 minutes in and it was more of the same story as Mapimpi scored his second try of the night. Jantjies converted to take the score to 45-3.

Just five minutes later, Siya Kolisi got in on the act with a try after coming off the bench. The South Africans took advantage of the tiring Namibians to become the first side to hit half a century in this tournament. 50-3 it stood after Jantjies missed his conversion.

64 minutes in and Brits added what would be the final points of the night with a try. The 38-year old threw the ball in the line-out before joining the mall and eventually running the ball across the line. The scoreline read 57-3 to South Africa after Jantjies converted.

38 - Schalk Brits (38) is the second oldest player to score a try in a @rugbyworldcup match, after Uruguay's Diego Ormaechea who was 40 when he crossed against Spain in 1999. Sprightly. pic.twitter.com/Q28aB8DUID

The utter dominance of the Springboks had lulled the atmosphere within the stadium.

And so it finished at the Toyota stadium in what turned out to be an absolute demolition of the Namibians.

South Africa will feel like they should've scored more despite the heady scoreline but head into their next clash against Pool toppers Italy with renewed confidence. Namibia meanwhile will look to pick themselves up and prepare for a harrowing fixture against the reigning World champions next.

After an impressive performance in #RSAvNAM, the @mastercard Player of the Match was Lood de Jager for @springboks


popular
The FootballJOE Pub Quiz: Week 11
Man United's tactical issues summed up in six shocking screenshots
O'Hora and Keegan hammer into each other, both of them only revelling in it
Manchester United players 'lose faith' in Solskjaer after Liverpool pasting
McBrearty has dramatic equaliser ruled out as Naomh Conaill win Donegal grudge game
Jesse Lingard seeks to clear up what United fan shouted when he was warming up
Paul Scholes rips into Pogba after disgraceful performance vs Liverpool

You may also like
1 year ago
Sinckler a stand-out, but more consistency needed - Flannery
1 year ago
"We haven't got a long-term or short-term estimate of when Joey is back" - Stephen Larkham
1 year ago
House of Rugby team agree on seven players in World Cup 'Best XV'
1 year ago
Pieter Steph Du Toit locks down World Player of the Year award
1 year ago
Kyle Sinckler knocked out by Maro Itoje elbow after only two minutes
1 week ago
"The guy just can't catch a break" - RG Snyman back on gruelling comeback trail
Next Page