A green hue is beginning to emerge.

Wins for Ireland, Wales and Italy in this weekend's Six Nations so it will come as little surprise to you to learn our team of the week features swatches of blue, red and green.

Saying the best of a bad bunch would take credit away from Dulin as he was genuinely impressive for the French, in another losing effort. Scored a try and made line breaks and metres for fun.

Starting to find form again. Big carries on either flank and almost claimed what would have been a well deserved try.

The sole Scottish entry. Great anticipation saw him score an intercept try. Along with Stuart Hogg, tested the Italians all afternoon.

Outstanding performance from the 21-year-old. Led the team with tackles, won a penalty in front of the posts and scored that excellent try in the corner. Believe the hype.

Eight starts in a row and now a big part of this team. Was dominant in the air. Most of Ireland's best moves in the opening quarter came through Zebo. Big defensive game and made one hefty tackle on Anthony Watson.

Controlled his team's tempo, troubled England with high bombs and was key in a number of decent backline moves. Schooled George Ford, his opposite number, and kicked five from six off the tee.

If Ireland can keep Murray and Sexton fit, they will have a good chance of winning most games they play. Played the kicking role his coach demanded and his passing improved after a ropey start. Nicely weighted kick for Henshaw's try.

The Welsh scrum was as sturdy, for Wales, and worrisome, for the French, as Warren Gatland could have dreamed. Put in a big shift for his side.

When he ripped off his scrum-cap for a big set-piece, it roused his teammates and the crowd. Played that extra loose forward role to perfection and hit all of his jumpers. Nine tackles and nine carries.

Welcome back big guy. Missed the Scotland game with concussion but arrived back just in time for a tough evening's work in Paris. Powerful scrummager and has some set of lungs. Lasted 79 minutes and only came off as his coach was looking to wind down the clock.

Tackling stats are incredibly low - he connected with the one tackle he attempted. Toner's brief was lineouts and breakdow, breakdown, breakdown. He did all four jobs well - clearing out countless white jerseys - and managed to spoil two of England's throws. 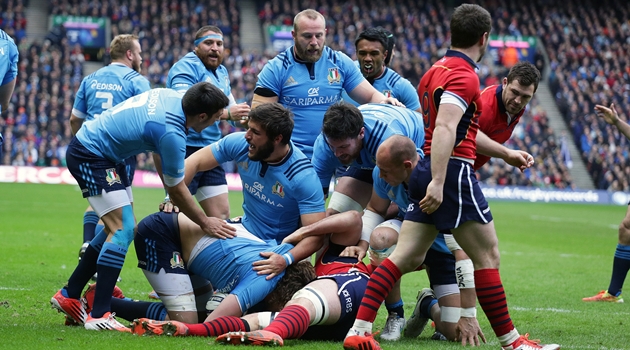 Just reward for the feisty second row. Scored a try, went close to scoring another, was part of a pest-like scrummaging and rucking unit. Won a couple of vital turnovers and got his team on the front-foot.

The Munster captain has been in top form for his country for the past two years. Will never chart huge carries but tackles like a man possessed and is a crucial presence at both attacking and defensive rucks.

Off the bench after 24 minutes. Put Henshaw away with a sublime reverse pass and tackled with ferocity. Covered miles across that D4 pitch.

One of world rugby's most rooted-for players got another one in the win column on Saturday. Drove his team on relentlessly and broke the Scottish lines on three occasions. Was a big part of that pack drive that won the late penalty.


popular
Noel Gallagher left 'covered in blood' after headbutt from Ruben Dias’ dad
Cutting through the contradictions from one of the worst television segments of the year
Roy Keane shows great comic timing after Jack Grealish party invite
France the sore losers as Ireland Men reach first ever Sevens World Series final
Alex Ferguson reportedly delivered a cutting put down to Ralf Rangnick's assistant coach
"I don't want to stick the knife in" - Are Leinster in Munster's heads?
Ralf Rangnick nicknamed 'specs' and subject to 'bully behaviour' at Man Utd
You may also like
1 week ago
"I've probably watched every single Paul O'Connell speech" - Kyle Sinckler
2 weeks ago
Jack O'Donoghue and Alex Kendellen play themselves into Ireland's summer plans
2 weeks ago
Josh van der Flier proving why Lions snub was so baffling in every single outing
3 weeks ago
Eddie Hearn hints at Katie Taylor v Amanda Serrano rematch in Ireland
4 weeks ago
England scrumhalf gets away with clear strike on Ireland's Michelle Claffey
1 month ago
Munster announce signing of French centre who can play for Ireland
Next Page