Close shave in the south of France. 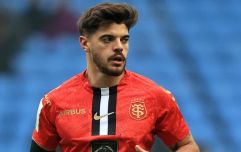 END_OF_DOCUMENT_TOKEN_TO_BE_REPLACED

Last Friday, we reported that the French outfits were exploring the option of merging so they can keep up with the high-flying likes of Toulon and Clermont.

Now, it seems, the merger has been put on the back-burner. Both sets of fans protested against the proposal and Bayonne's president Manu Merin claims he and his family were threatened.

Recent changes of club ownership and player salaries have seen the two sides suffer. Biarritz were relegated to ProD2 last season and, despite the coaching of Eddie O'Sullivan, could not bounce straight back up. Bayonne are 13th in the Top 14 and on the brink of relegation.

Their best players are being lured away to greener [€100 bill green] pastures.

Just as the Irish provinces are discovering, heart and history will only get you so far in European rugby's brave new multi-million-euro-TV-deal world.

Biarritz' Dimitri Yachvili passes from the back of a ruck against Connacht in 2012. END_OF_DOCUMENT_TOKEN_TO_BE_REPLACED

Although both club presidents, Blanco [Biarritz] and Merin [Bayonne] have denied reports of a merger, RMC reported that a meeting between both men had taken place on Monday, May 12.

Rugbyrama report that Merin broke the news to his players on Tuesday and that several were in tears. Even if the club avoid relegation [they have two games left], many of their teammates will be cut to make way for some of Biarritz' leading lights.

When contacted about the meeting, Merin stated: 'At the moment, there is nothing to say. Players have been told that there had been discussions between the two clubs, but the important things [are] the upcoming matches against Bordeaux-Begles and, at home, against La Rochelle to keep the club in the Top 14.'

'Stop asking me if it will happen,' he added.

Merin met with about 400 Bayonne supporters, last Wednesday and tried, unsuccessfully, to assuage their fears. The pow-wow ended with irate fans queuing up to sign a petition calling for Merin's resignation.

On Sunday, Merin addressed a press gathering and reported that merger talks had been shelved. He declared:

'Faced with such violence, to protect my family and employees, I decided to stop the talks. It seemed wise to have a discussion with Biarritz. Today, I prefer that we stop before the disturbances increase.'

If the merger had progressed, O'Sullivan, who led Ireland to two World Cups and three Triple Crowns, would have been favourite to pip Bayonne's Patricio Noriega for the head coach job. His team could potentially have included include Harinordoquy, Rokocoko, Kurt Morath, Benoit Baby and Takudzwa Ngwenya.

Whether or not French league officials at the LNR would have allow a merged team to play in the Top 14 would have depended on Bayonne and their battle to stay up.

*Updated from piece first posted on May 15