A pack that can move.

Stuart McCloskey at centre for what is just his fourth cap.

END_OF_DOCUMENT_TOKEN_TO_BE_REPLACED

Andy Farrell has offered a different feel for his Ireland team to take on Georgia on Sunday (2pm).

Ireland are in line to finish as group runners up in their Autumn Nations Cup pool when they welcome the Georgians to Dublin this weekend. Georgia have yet to register a point in either game against England and Wales and it should tee the Irish up with a Finals clash against Scotland, assuming France put Italy away in their final game to top the group and take on England.

To that end, Farrell has named a lively team to start the game with Hugo Keenan, Chris Farrell and Keith Earls keeping their places amongst the backs that see a return for Stockdale, Murray and the inclusion of Stuart McCloskey.

Billy Burns will run the show from number 10. 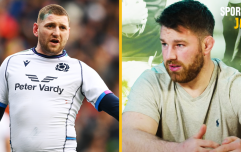 END_OF_DOCUMENT_TOKEN_TO_BE_REPLACED

One player is in line for a debut and although there is some disappointing amongst fans not to see him included in the starting team, the prospect of Shane Daly getting a run out for his first Ireland senior international is appetising.

The Munster back has already bagged 7s experience with the Irish set-up and he has spoken before about how that has helped him make the transition from centre to wing as necessary.

A cheetah across the ground, Daly has a real nose for danger and his recoveries are something that have already endeared him to supporters at provincial level.

He also has bite and real steal and thinks nothing about dishing out some punishment when the opportunity presents itself.

Huge hit from Shane Daly on the Kiwi 15 #Wolfpuppies pic.twitter.com/xLUrOT63fm

On Sunday, all going well, he will make his full Ireland debut and, at 23, it could be the start of something really exciting.

You may also like
1 year ago
Former Munster star Johne Murphy reveals which Irish players should make the Lions squad
1 year ago
"There is so much more running" - Irish star swaps the oval ball for the ONeill's ball
1 year ago
From West Clare to the top for multi-talented Considines
1 year ago
15 seconds that sum up the cut and tenacity of Robbie Henshaw's Six Nations campaign
1 year ago
"He completely out-played Itoje. You barely saw Itoje as the game went on"
2 years ago
Rob Kearney exits a glittering Irish rugby career, never to be replicated
Next Page