"We regroup and we go again."

Sean O'Brien has beaten the All Blacks at the seventh time of asking. Many of his previous six performances against New Zealand have been equally impressive - equally barnstorming - but he was finally rewarded in Wellington.

The Leinster and Ireland flanker was one of the best Lions on show as the All Blacks were beaten 24-21 after holding a nine-point lead with just over 20 minutes remaining.

END_OF_DOCUMENT_TOKEN_TO_BE_REPLACED

O'Brien played a crucial role in Toby Faletau's try that gave each and every Lions fan belief, and he kept going from there. Another 80-minute effort from 'The Tullow Tank' and the Lions sure needed it.

He featured in the build-up to Conor Murray's converted try that made it 21-21 and made a strong carry soon after as the Lions went for the jugular. The move itself was a smart one - with the openside at first receiver off an attacking lineout - but it ended up with O'Brien lifting teammate Jack McGrath out of it. 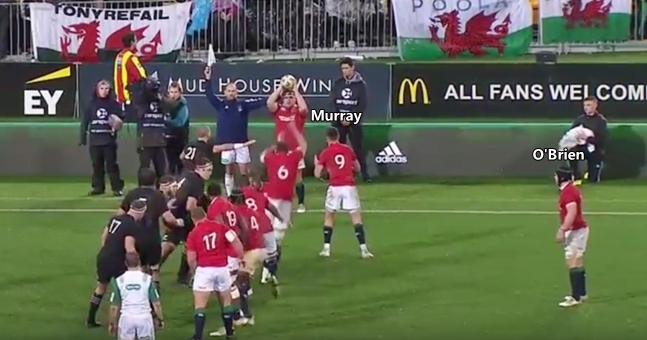 Conor Murray found O'Brien and Courtney Lawes followed up with another good drive before Murray, again, picked out McGrath.

END_OF_DOCUMENT_TOKEN_TO_BE_REPLACED

O'Brien was set to run a decoy line - making like he wanted the pass to take out a couple of New Zealand defenders - but McGrath hesitated. The flanker ended up running in front of him - crossing him in the progress - and taking out Charles Faumuina.

Penalty All Blacks. O'Brien let McGrath have it:

McGrath protested his innocence but you could hear O'Brien's high-pitched voice respond with another stream of harsh critique.

END_OF_DOCUMENT_TOKEN_TO_BE_REPLACED

Having played in the heartbreaking losses to New Zealand in Christchurch [2012] and Dublin [2013], O'Brien was not in the mood to let another one slip.

It took the Lions almost three minutes to get the ball back but when they did - Ngani Laumape knocking on - the Irish forwards were part of a surging Lions defence that forced the turnover.


popular
Andy Farrell goes for Munster veterans as Ireland team to face New Zealand named
The four stone-cold certainties for All-Stars even as early as this
Eamon McGee just couldn't help himself with Armagh-melee tweet
"The economy was one of the big reasons" - Cadogan's move from an electrician to personal training
"He's actually smiling putting the ball over the bar. He should nearly be fainting." - Ryall on Limerick's legacy
Kylian Mbappe reportedly wants PSG to sell Neymar
Gavin Coombes one of four Irish players to push themselves into Test picture
You may also like
3 years ago
James Haskell's first Lions Tour encounter with Tadhg Furlong was certainly unforgettable
4 years ago
Garry Ringrose only needed two games to expose regrettable Warren Gatland decision
4 years ago
Warren Gatland reveals concerns about Fields of Athenry before Lions Tour
4 years ago
Ben Te'o was rightly livid after some sneaky jersey swapping on the Lions Tour
4 years ago
Two Ireland stars included in French outlet's Team of the Year
4 years ago
2017 ended the debate about Johnny Sexton being Ireland's greatest outhalf
Next Page