"When you get those lows, you just gotta come back and do all you can do."

Sean Cronin is dealing with another low, at present, but he will back himself to come back stronger from his latest disappointment.

The Limerick native would have been hoping to get a decent crack at the Ireland No.2 jersey this summer but had to settle for a bench role in Brisbane. For the second Test in Melbourne, Niall Scannell starts and Rob Herring is deputising.

END_OF_DOCUMENT_TOKEN_TO_BE_REPLACED

Cronin misses out on the squad entirely. Most writers, former players and fans had Cronin starting for Ireland against the Wallabies this weekend but Joe Schmidt obviously thinks otherwise.

Having led Ireland to a Grand Slam and their highest ever world rankings total, it is hard to argue against Schmidt but this call sits uneasily. Needing to win this weekend to keep the Test Series alive, the coach is going with a player [Scannell] who was included in the original touring squad to start.

So it is Sydney [next weekend] or bust for Cronin. He will have to sit back and watch the Second Test like the rest of us. 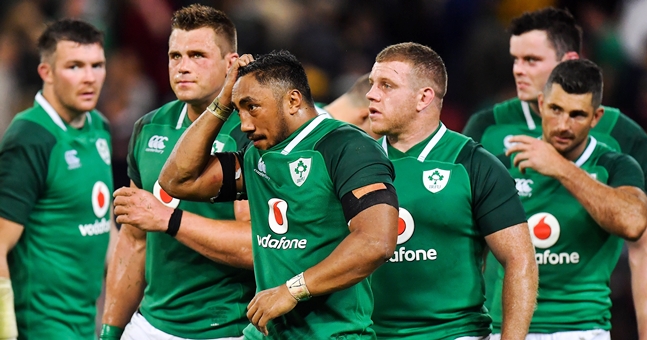 END_OF_DOCUMENT_TOKEN_TO_BE_REPLACED

Cronin was in the best of form when we last spoke with him, and with good reason.

The hooker had just added the Guinness PRO14 title to the Champions Cup and Grand Slam triumphs he played a significant role in before that. He held court in the Aviva Stadium mixed zone and reflected on a brilliant end to a season that took a while to get motoring.

"I was basically out for nine months, from January," Cronin said as he recalled that serious hamstring injury from 2017. "I came back and I probably wasn't fit enough. I was struggling a little bit and got left out [of the Ireland squad] in November.

"That was fair enough. I had to hold my hand up and say, 'Look, what do I need to do to get back there? I need to work hard'. It worked out well and I squeezed back in there for the Six Nations.

"I've had to work hard and look for what the coaches wanted from me here. It's great to be involved."

END_OF_DOCUMENT_TOKEN_TO_BE_REPLACED

Missing out on the 2017 November internationals had come as a surprise to many. Cronin had made a return for Leinster but Schmidt opted for Rob Herring and James Tracy to cover for first-choice hooker and captain Rory Best.

While former Munster and Ireland outhalf Ronan O'Gara was not calling for Cronin to start for his country ahead of Best, he was perplexed at his omission from the squad. He told The Hard Yards:

"Keep Sean in storage and then let him explode like he did [against Cardiff] and let him score a try when all the defences are knackered and he skates in from 50 metres.

"It's such a weapon to have - a forward that has the capacity to do that... I don't think there's a better impact sub in world rugby than him."

Cronin won't get the chance to make that bench impact in Melbourne and one has to wonder if his poor showing as a First Test replacement harmed his chances for this weekend.

He was pinged for a neck-roll on Michael Hooper, as he tried to clear him from a ruck, and match referee Marius van der Westhuizen did briefly consider sending him to the sin-bin. The penalty put his side under the pump but not as much as a scrum that followed soon after.

Ireland conceded a scrum penalty off their own put-in and Silatolu Latu - Cronin's opposite number - got a lot of the credit for teaming up with Tom Robertson to crumple [and wheel] the Irish set-piece. Cronin stuck a couple of tackles and made 19 metres off his four carries but he has had better nights of it.

There is the possibility that Schmidt will start him in Sydney. It must be noted that Jacob Stockdale, John Ryan, Iain Henderson and Keith Earls have gone from starting to missing out on the Melbourne action completely.

Knowing how he backs himself, though, Cronin would have dearly loved the opportunity to prove he has what it takes to be a key player in this Irish side.


popular
Ireland team to play Wales: Andy Farrell's XV, the big calls and bold cuts
Even Roy Keane felt Michael Dawson went too far with his remark to Tom Heaton
Ireland's self destructive mentality kills Croke Park fight for Katie Taylor
Roy Keane reminds everyone of his feelings towards Newcastle United ahead of cup final against Man United
Everton release brutal 59-word statement to confirm Anthony Gordon departure
Five confirmed changes and guidelines to have big impact on 2023 Six Nations
"Every team did it!" - Paul O'Connell on Roy Keane comment to Ronan O'Gara that he couldn't deny
You may also like
15 hours ago
Ireland's self destructive mentality kills Croke Park fight for Katie Taylor
2 days ago
"I've heard people tipping Wales to beat us. I was actually offended!" - Greg O'Shea
2 days ago
"It's crazy to think Bundee Aki might come straight in and start against Wales"
4 days ago
Two Ireland stars included in Premier League's 'young English XI'
4 days ago
British publication urges Gareth Southgate to claim Evan Ferguson for England
1 week ago
The two toughest calls in Ireland team to face Wales are in the backline
Next Page