Scotland faced off against Russia in a Pool A fight.

Scotland came into the game having beaten Samoa and Russia arrived following a sound loss at the hands of the Irish. This turned out to be the first time these two sides have met in Test rugby as Russia were searching for their first ever victory at a World Cup.

END_OF_DOCUMENT_TOKEN_TO_BE_REPLACED

Following the anthems, the game kicked off.

14 minutes in and Scotland would land the first blow as Adam Hastings scored from a pass off George Horne. Hastings converted for a 7-0 score to Scotland.

19 minutes in and Hastings was on the scoresheet again – the fly-half popped a kick behind the Russian defence before eventually collecting it to score.

1 - @adamhastings96 has scored his first and second @rugbyworldcup tries, his father Gavin is @Scotlandteam's top point (227) and try (9) scorer at the tournament. Familial.#RWC2019 #SCOvRUS pic.twitter.com/eRyQeOApTS

END_OF_DOCUMENT_TOKEN_TO_BE_REPLACED

21 minutes in and Scotland would land their third try of the game following a Russian error; Dmitry Perov handed the ball to George Horne after a line-out and the young fly-half duly took advantage to score. 21-0 the scoreline read after the Hastings added the conversion.

Halftime arrived following what turned out to be a very satisfying first half for the Scots, who varied their attack and were stout in defence to keep the Russians scoreless.

END_OF_DOCUMENT_TOKEN_TO_BE_REPLACED

The second half sprang into life and just six minutes in, Scotland grabbed their bonus point with a converted try. Darcy Graham found himself in space with the ball before proceeding to dance past three Russians before finding Horne who touch down for his second try. Hastings converted for a score of 28-0. 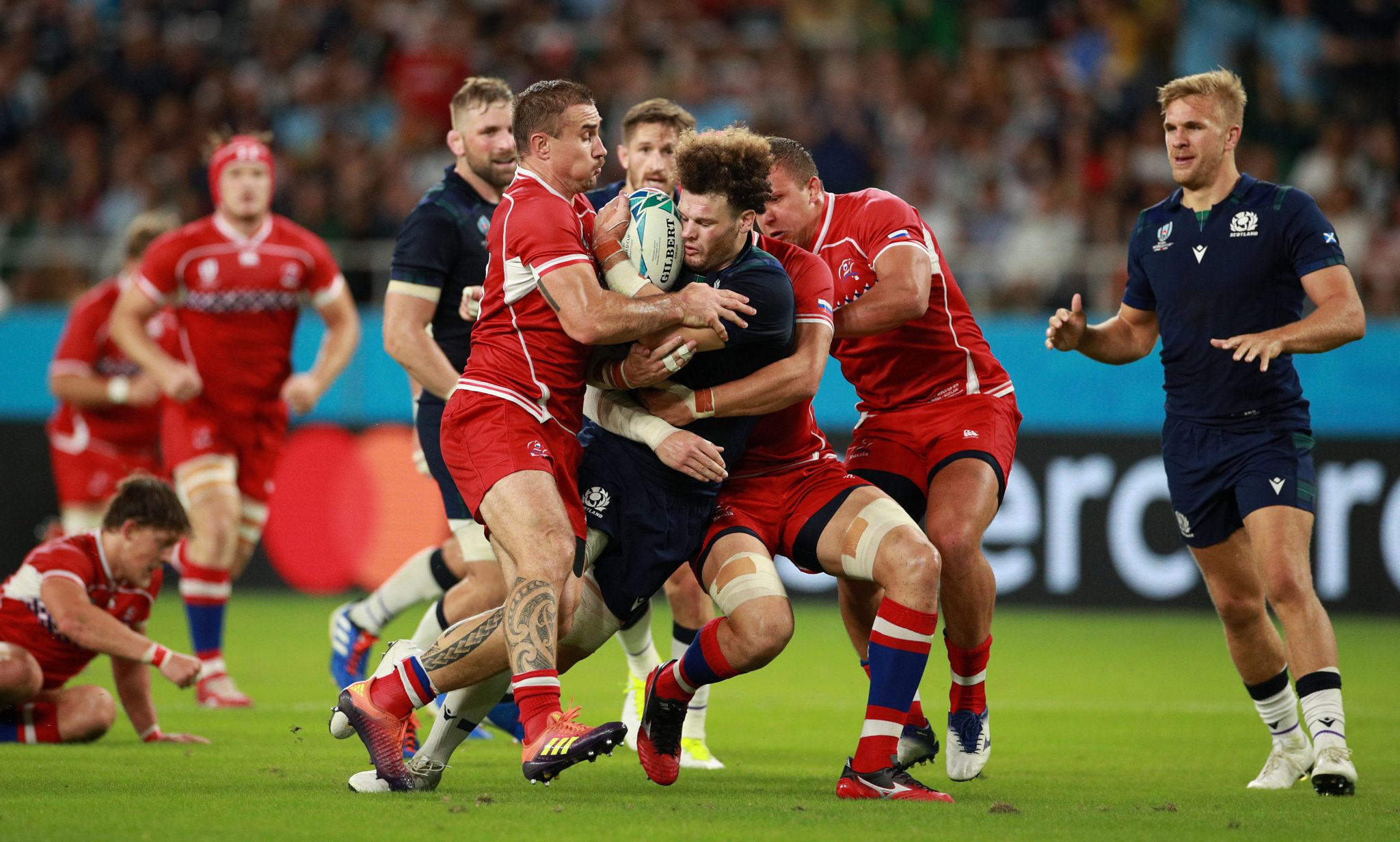 51 minutes into the encounter and George Turner landed Scotland's fifth try after bursting through the Russians defence following a driving maul. Hastings grabbed the two points.

Seven minutes later, Blair Kinghorn sliced a scintillating grubber pass which crossed the Russian try line before Tommy Seymour clambered on to it and scored. Hastings converted as the score read 42-0.

With that effort, Seymour became the fourth highest scorer for Scotland with 20 tries, overtaking Stuart Hogg in the process.

Entering the final quarter, a hat trick hero emerged as Horne grabbed his third of the game after finishing off a slick move he began just outside the Scottish 22. Hastings ended up missing the resulting conversion.

5 - George Horne is the fifth player to score a hat-trick for @Scotlandteam at the @rugbyworldcup and the first since Ally Hogg in 2007 (v Romania). Triple.#RWC2019 #SCOvRUS pic.twitter.com/Dh87LbxzzY

76 minutes in and Scotland bagged a half century after John Barclay walloped through to score after poor defending from the Bears. 54-0 it stood after the added conversion.

Three minutes later, Stuart McInally joined the try fest after some free-flowing rugby to score in the corner. Hastings converted as the final scoreline read 61-0.

And so it finished at Shizuoka with Scotland garnering a commanding win with no reply from the Russians. Their confidence would certainly have been given a boost after registering 9 tries, a 98% tackle rate, Horne grabbing a hat trick and their stout defending. They face Pool toppers Japan in an exciting showdown to secure a place in the quarters next.

"We enjoyed that one. Sometimes these games can get a bit scrappy and we were a little bit nervous because of what we'd seen Russia do to other teams. But we were really professional, stuck to how we wanted to play and came away with a good result."


popular
Andy Farrell goes for Munster veterans as Ireland team to face New Zealand named
The four stone-cold certainties for All-Stars even as early as this
Eamon McGee just couldn't help himself with Armagh-melee tweet
"He's actually smiling putting the ball over the bar. He should nearly be fainting." - Ryall on Limerick's legacy
Kylian Mbappe reportedly wants PSG to sell Neymar
Gavin Coombes one of four Irish players to push themselves into Test picture
"The economy was one of the big reasons" - Cadogan's move from an electrician to personal training
You may also like
2 years ago
"It was a complete and utter shock when Joe's name came up on my phone" - Devin Toner
2 years ago
Sinckler a stand-out, but more consistency needed - Flannery
2 years ago
"We haven't got a long-term or short-term estimate of when Joey is back" - Stephen Larkham
2 years ago
House of Rugby team agree on seven players in World Cup 'Best XV'
2 years ago
Pieter Steph Du Toit locks down World Player of the Year award
2 years ago
Kyle Sinckler knocked out by Maro Itoje elbow after only two minutes
Next Page