Schoolboy told he couldn't play rugby has become a referee

Arthur Cripps, from Cheadle, Manchester, suffers from tetralogy of Fallot, a congenital heart condition that limits him from participating in contact sport.

For a rugby-mad lad like Arthur, this was devastating - but he wasn't about to let it prevent him from getting involved in the game he loves. 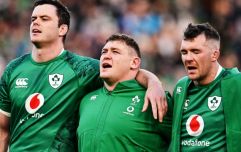 END_OF_DOCUMENT_TOKEN_TO_BE_REPLACED

His brother plays rugby and he is a keen follower of Sale Sharks, and Arthur's route into the game came close to home.

Arthur said: "It was my brother's friend Connor who came back one day having refereed and said that I should give it a go.

"Until then my condition had never allowed me to play and I had to sit on the sidelines, but now I'm at the centre of the game as a referee. It's amazing."

With the help of Arthur's sports teacher Jonny Cartwright, an alternative curriculum was created to allow him to safely learn and develop refereeing skills to oversee games at his school.

Speaking exclusively to JOE, Mr Cartwright said: "Whenever the pupils are learning a skill or developing something in lessons or at rugby club, Arthur learns how to referee that element of the game.

"Rugby prides itself on being a game for all. It's been brilliant to support Arthur in being able to participate in a meaningful way with his peers whilst developing skills that allow him to manage and referee a game of rugby."

Arthur is being supported on his refereeing journey by ACME Whistles, whose marketing director Ben McFarlane said: "We love to hear amazing stories like Arthur's and wanted to do everything we can to help inspire him to continue on his journey.

"Arthur is a really articulate and passionate young man. With the support of his teachers, family and the wider sport, I'm sure Arthur will have a bright future behind the whistle."


popular
Nigel Owens on most annoying players to referee (three of them are Irish)
Six All Blacks but no Ireland players in world's top 20 list headed by Antoine Dupont
"I asked one question and lads slagged the arse off me!" - Johnny Sexton on Roy Keane chat
"My thoughts were with him initially and that's why I got emotional" - Mulcahy still the man for Kilmallock
Seamus Coleman gives brilliant post-match interview after Everton beat Arsenal
"Women's rugby deserves better and he's not the man for the job"
Top scorers of Dublin team that dominated the last decade of Gaelic football revealed
You may also like
6 days ago
"Stephen Larkham's impact on Munster Rugby has been pretty underwhelming"
1 week ago
"I'm not a fan of that celebration" - James Hume earns praise, and a gentle scolding
1 week ago
"Let's just say the truth - Connacht hate Leinster so much" - Darren Cave
1 week ago
"I've had stick my whole career" - Mike McCarthy on 'Plastic Paddy' jibes and singing the anthem
1 week ago
'Joe Schmidt would do wonders with the All Blacks'
2 weeks ago
Joey Carbery puts himself in position to end odd Six Nations streak
Next Page