Sam Burgess is back in league with the Rabbitohs

Sam Burgess has gone from being a rabbit in the headlights back to being a Rabbitoh.

This afternoon, Sam Burgess told Bath Rugby he was leaving and tonight his old club confirmed his return.

He was a rugby union player for 372 days.

The 26-year-old, who made his name in rugby league with Bradford Bulls and South Sydney Rabbitohs, was heralded as the wrecking-ball answer to England's World Cup dreams.

He has now returned to Russell Crowe's club, where he won the 2014 NRL title.

Burgess played centre and flanker for Bath Rugby but missed out on England selection during the November Series and 2015 Six Nations. He was called into the World Cup training squad and made the final cut after only two Test caps.

He was used as an impact sub for the opening win over Fiji but promoted to start alongside Brad Barritt for the crucial match against Wales, which England lost. 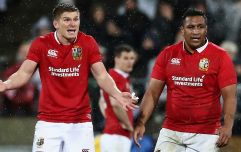 The England stars in biggest danger of missing Lions Tour

END_OF_DOCUMENT_TOKEN_TO_BE_REPLACED

Somewhat unfairly, the media focused on Burgess' selection as the main, wobbly pillar of England's malaise.

Following the World Cup, Bath coach Mike Ford granted him an extended leave of absence while promoting him as a potential flanker for World Cup 2019.

Barring another, unlikely return to union, Burgess will be nowhere near England, or Japan, in 2019.

Bedlam while it lasted.

Am I hearing @SamBurgess8 has left Bath? If so rugby union has let the lad down..


popular
The most Stone Age tackle you've ever seen gets South African lock straight red card
Galway fans' frosty reception for Davy Fitz doesn't make any sense
Michael Schumacher paralyzed and suffering from memory and speech problems
"Johnno went, 'We’re not moving! You're trying to mess us about!'" - Ben Kay recalls red carpet controversy
Ryan Manning hacked to the ground by Henri Lansbury in ruthless assault
'Brian was a genius... he would've killed you to even win a game of touch'
Final question of Ryder Cup press conference has Team USA in all sorts of trouble
You may also like
5 months ago
Eddie Jones gets into it with reporters after Ireland's thumping win
6 months ago
Joy Neville praised for "courageous" call that delivered English victory
6 months ago
Ellis Genge reveals death threats received after England's loss to Wales
7 months ago
Eddie Jones insists Joe Marler always welcome back after England decision
11 months ago
"Too simplistic" to say Irish players struggling with English power game - Stuart Lancaster
1 year ago
Eddie Jones on the Guardiola training session that opened his eyes
Next Page