Guy Grinham had one item at the top of his bucket list - to see the Wallabies play at a World Cup.

END_OF_DOCUMENT_TOKEN_TO_BE_REPLACED

At one stage, with the 13-man Wallabies racing a four-on-two overlap out wide, Adam Ashley Cooper shot out of the defensive line to make a do-or-die wraparound tackle on Dan Biggar. It saved a certain try and a Welsh comeback.

There was no way Ashley Cooper was losing that day.

Up in the stands, Guy Grinham watched on. The 31-year-old, who worked as a rugby referee in Sydney, was proud of the defensive efforts of the Wallabies back. The pair played club rugby together on the Central Coast and had stayed in touch over the years.

Ashley Cooper was equally proud of Grinham - a guy who had bravely battled cancer for a number of years and who retained his fighting spirit, and love of the game, when each passing diagnosis got worse.

It was feared that Grinham would be too ill to attend the Australia-Wales game. Making the trip to England had taken a lot out of him but he found some reserves of strength to get to Twickenham.

As soon as the final whistle blew, Ashley Cooper jumped the advertising hoardings and climbed over 100 steps to reach the corporate box [kindly supplied by World Rugby] to meet his friend. 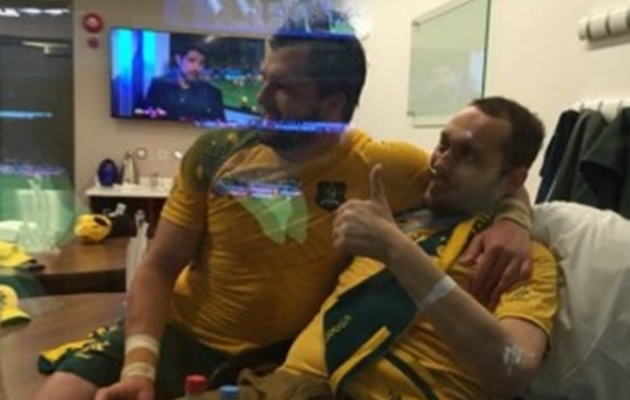 END_OF_DOCUMENT_TOKEN_TO_BE_REPLACED

Earlier this week, news filtered out from London that Grinham - the cancer now spread to his spine - had passed away.

"He had a wife and two kids. It's a sad story. But I'm really happy I got to share a moment with him after the win. It was the least I could do, to go there and represent the group. We were on the bucket list, and that is pretty special."

Extremely sad news overnight with member Guy Grinham losing his battle with cancer in the UK. Will be sorely missed. pic.twitter.com/SjOG6CDxUi

The Aussies held a moments' silence in Grinham's memory at training, today.

Ashley Cooper commented, "It was a moment for us to not only to wish him a safe passage to where he now rests but to also realise how lucky we all are."