Ireland's Grand Slam win over England on St. Patrick's Day was the most watched sporting event with an audience in excess of 975,000 viewers.

Sport dominated the most watched programmes with 10 entries inside the top 20 with rugby boasting four entries, the football World Cup registering four matches and the GAA's All-Ireland finals both making the top 10 but missing out on the top five most watched shows of last year. 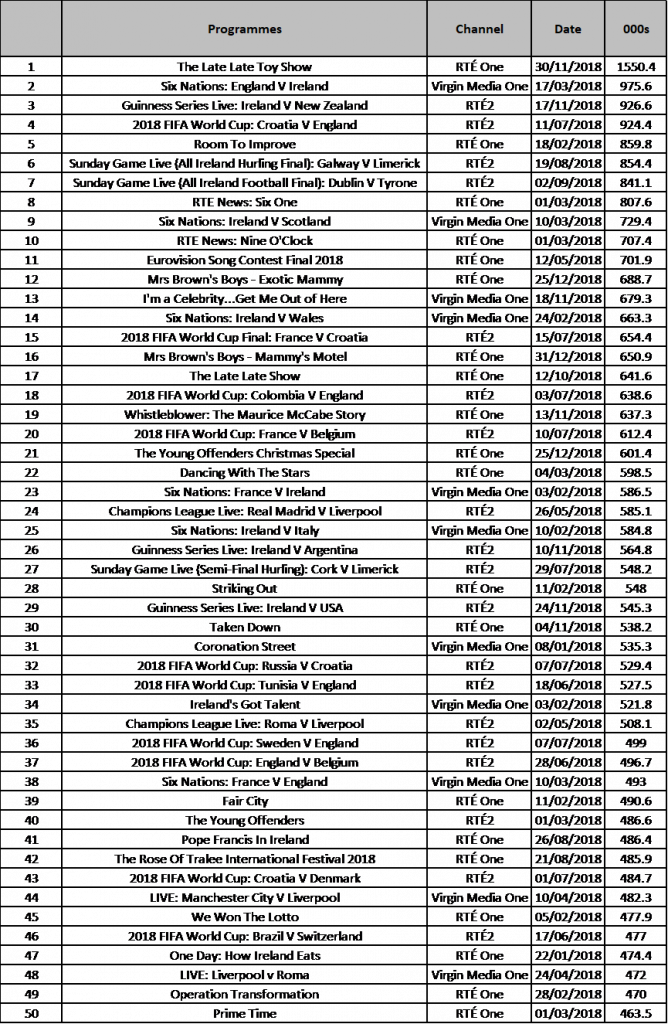 END_OF_DOCUMENT_TOKEN_TO_BE_REPLACED

Sport was a big winner this year again accounting for more than half of the top 50 programmes of the year and Jill McGrath from TAM Ireland claiming that the success of the rugby team was the main driver in its rise to the top and that the Rugby World Cup should rank highly on next year's ratings.

"The great thing about tv is the ability to show live sporting events and it registers with the general viewer," McGrath told SportsJOE.

"I don't think it's unique to Ireland it's more to do with tv but the success of the team this year certainly had a big impact on rugby doing so well with viewers.

"A lot of this year with rugby will depend on how Ireland fare at that tournament and the longer we stay in the more excited we become as a country.

"Fans were very engaged with rugby last year and if the team do well that should translate with viewers."


popular
The FootballJOE Pub Quiz: Week 11
O'Hora and Keegan hammer into each other, both of them only revelling in it
Man United's tactical issues summed up in six shocking screenshots
McBrearty has dramatic equaliser ruled out as Naomh Conaill win Donegal grudge game
Manchester United players 'lose faith' in Solskjaer after Liverpool pasting
Jesse Lingard seeks to clear up what United fan shouted when he was warming up
Liverpool's half-time words in Old Trafford dressing room will please fans greatly
You may also like
5 days ago
Jordan Larmour primed for a season to remind everyone how good he is
6 days ago
Seven exciting Ireland prospects pushing for November squad inclusion
6 days ago
"Where Johnny Sexton is so important to us now is being able to pass the baton"
6 days ago
"I'd love to finish on home soil but I can't see it. I won't be playing in the next Six Nations"
1 week ago
Ireland star Will Connors on his rude awakening playing GAA in KIldare
1 week ago
Andy Farrell's Ireland squad for November internationals to feature some exciting talents
Next Page