"I burst a few stitches, doing that, and got in trouble for it."

Being a rugby player and copping a few bad injuries is a peril of the job, that comes hand-in-hand with the perks. Just ask Greg O'Shea and Megan Williams.

While the Covid-enforced break in the 2019/20 rugby season afforded every battered and bruised professional six months without shipping heavy blows, the full-blown return of games has seen the status quo resume.

END_OF_DOCUMENT_TOKEN_TO_BE_REPLACED

Most professional rugby squads operate on the understanding that 15-20% of their senior squad will be injured at any one time. Occasionally, as Connacht and Ulster have found in recent seasons, that figure can veer close to 40% and stretch numbers to the limit.

On the latest House of Rugby URC [LISTEN from 59:30 below], hosts Greg O'Shea and Megan Williams shared some of their rugby injury tales with Leinster and Ireland star Lindsay Peat. 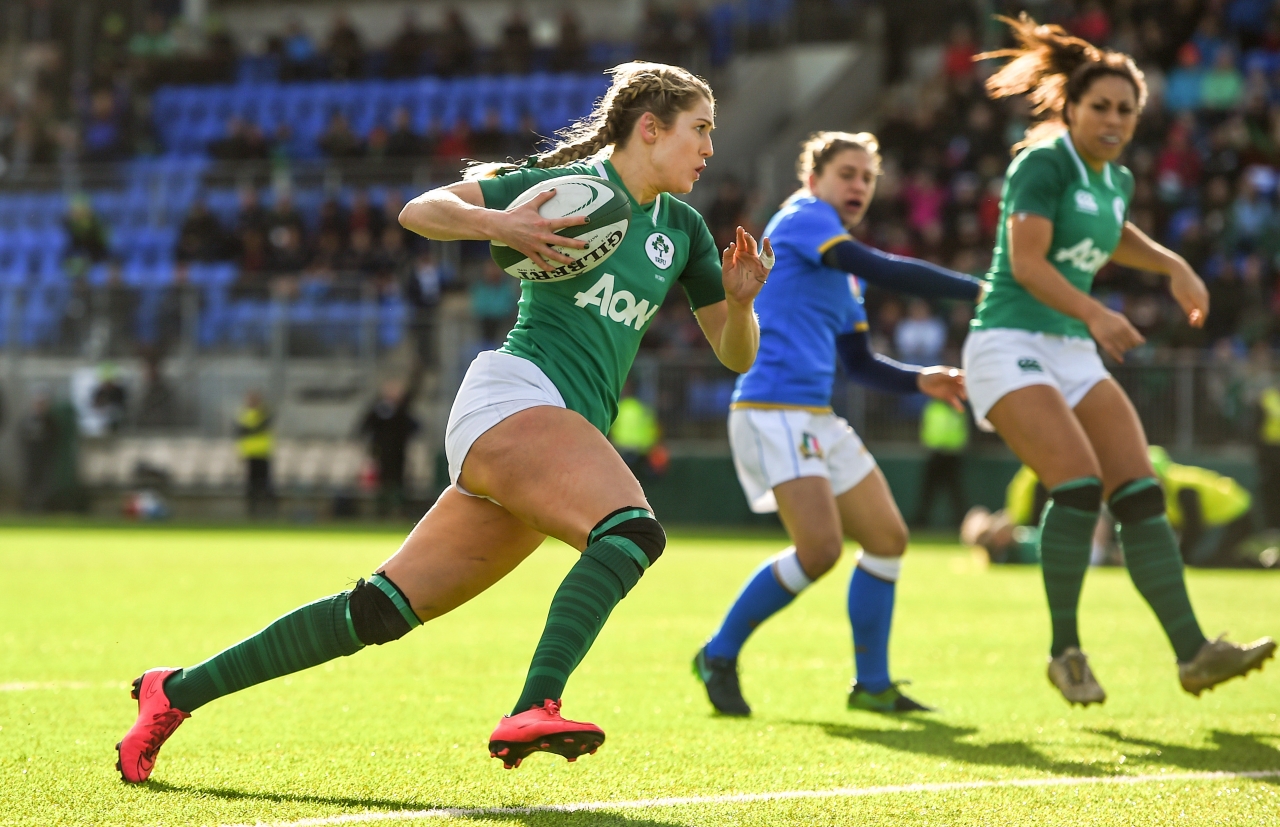 Megan Williams runs in to score for Ireland, against Italy, in 2018. (Photo by David Fitzgerald/Sportsfile)

In the past two game-weeks of the United Rugby Championship, Irish provinces have lost RG Snyman [Munster], Will Addison [Ulster] and Cian Prendergast [Connacht] to serious injuries.

Greg O'Shea had his fair share of knocks, which stalled his progress, while at Munster. Even switching to focus on Sevens did not see his injury luck change.

As he shared a couple of tales, there were knowing nods from Williams and Peat, who have played together for Leinster and Ireland. The following is just a snapshot of what each player has been through during their careers.

GREG: I'm 26 and I've had five surgeries, which is crazy. But I think most of the lads that I'd have played with would have had three or four surgeries. Lindsay, you've probably had your fair share on injuries?

LINDSAY: I do have a plate installed but have been otherwise lucky. I've just broken my leg [in February 2020] and then... touch wood! I've had a few neck issues as I'm a prop. So I had a bit of a bulging disc and I did lose the power in my [right] arm before. I couldn't lift my son's schoolbag, so I got a bit of a steroid injection for that. So other than that leg break, when I got a plate in, I've been lucky. I had this home-made bike set up in the playroom to keep going. I burst a few stitches, doing that, and got in trouble for it, but you know yourself. If I'm not in trouble, I'm not being me!

MEGAN: I still have this scar, from getting five stitches, on my hand. We were with the Sevens team and practising catching by trying to catch watermelons and melons. They were doing it with tennis balls too. They launched one of the melons in the sky and I caught it, but it burst across my hand and I had to get stitches across [the webbing of] my fingers. I was out for weeks.

Most rugby players will tell you they know too well, when they sign up, that knocks and injuries are part of the game.

Getting sidelined by a rocketing melon, though? That's pushing it.