Typically honest, Ronan O'Gara tells us what professional rugby players are really like

Ronan O'Gara has been surrounded by rugby players for the past 25 years. He knows what makes them tick and what ticks them off.

The former Munster legend is three years into his time as a defence coach with reigning Top 14 champions Racing 92.

He admits his first impression, when a player approached him as a coach and broken down when confessing a confidence crisis, was "Holy f**k".

END_OF_DOCUMENT_TOKEN_TO_BE_REPLACED

He didn't know what to say. He still hasn't cracked it but he's getting there.

What O'Gara knows best, he believes, is the mentality of top level rugby players. He knows how to get super-human performances out of them but will tell you these men are anything but super-human when the day is done and the battle is won... or lost.

"The players and people are put on a pedestal that they, maybe, don't deserve," he says of the current Irish environment. "They are not any different to anybody." He expands on the point:

"If people don't know you and you play for Munster or play for Ireland, [they think] 'That guy must drive a Porsche or a Ferrari and go to Barbados on holiday' and all that.

"No. We go shopping in Dunnes. We shower. We do all the things that everyone else does.

"We just go in and train instead of going to work. Then, of course, on game day you come into a different animal. That's under-appreciated - how much you can raise your game or raise yourself when you have 80,000 people roaring you on. That's powerful." 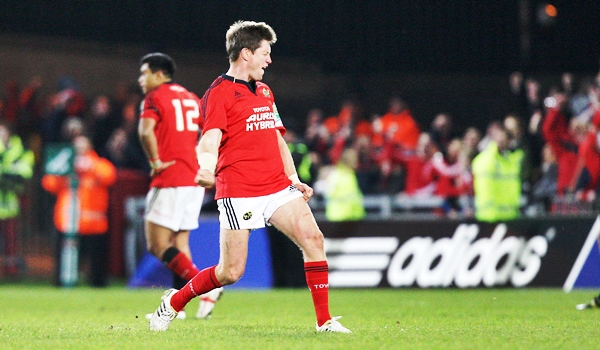 END_OF_DOCUMENT_TOKEN_TO_BE_REPLACED

It's debatable whether O'Gara would have had the career he did if he had broken through to the senior squad in this day and age. Modern players are not afforded anything like the chances the Cork native got to find himself as a player, work out his kicking kinks and become a leader for province and country.

O'Gara can still recall pacing up and down a pier on a week-long holiday to Greece after he had missed crucial kicks in the 2000 Heineken Cup final. He could not wait to get back, to exorcise those Twickenham ghosts.

O'Gara worked his arse off to become a genuine match-winner for Munster and Ireland. He admits he was practically giddy about hoisting the teams' hopes on his shoulder in the latter years of his career. Give me the kick, he thought. I can do it.

At the Huddle Dublin event at the Aviva Stadium, today, O'Gara re-lived two of his best drop goal winners, starting with the late, late Heineken Cup pool stage heart-breaker against Northampton Saints, in 2011. He said:

"The true story of that is you don't really know where it is going. If you look at that, we were making it up. I don't think you can structure 40 phases.

"If you look at it, it was about keeping ball. Experience is - and I keep going back to it - the ability to learn from past experiences. For me, in that situation, it was a case of... you probably have three or four opportunities to get the ball [for a kick] but you know they're not right.

"You've got to wait and hopefully back your teammates to hold onto the ball. We were making it up, changing direction and going over and back. The most important thing is that you control the ball.

"That was just being part of a team that had massive trust in each other. These are words but they mean nothing unless you taste it with your teammates. You can talk all day about these things but the proof is about when you go out onto the pitch. You back it up with actions."

Part of that experience O'Gara speaks of was being on the pitch with some of the players that had kept the ball and fed him for the Grand Slam-winning drop, at the Millennium Stadium, in 2009.

The Racing 92 coach says it is much easier for the players on the pitch - in pressure situations - than the supporter in the stands. "Even if you miss, you know you've had a crack. You can live with yourself," he commented.

"Believe me, after 75 minutes of a Test match, you are pretty shattered. You heart is going 180-200 beats per minute and you're not thinking like ye in the stand.

"You're thinking about what you've done in all your previous games... You're playing the moment."

He adds, "When you're in that moment you could be in your back garden. That's the way you should be, because you're completely blocking everything out."

Of all Ireland's go-to men over the last 40 years, O'Gara was the best at playing the moment and playing it well.