Everyone was calling Sam Warburton and Maro Itoje's recall but few predicted this.

Warren Gatland named his Lions team to face New Zealand on Thursday and found room for both Johnny Sexton and Owen Farrell. Having resisted the combination for most of the tour, Gatland is now starting both men in the hopes of opening up the All Blacks.

If only it were as simple. To accommodate both men, the Lions have dropped their defensive enforcer Ben Te'o and now have a backline the Kiwis themselves will relish attacking.

END_OF_DOCUMENT_TOKEN_TO_BE_REPLACED

Former Ireland and Lions outhalf Ronan O'Gara feels Gatland is going against his instincts with the selection. He told The Hard Yards rugby podcast that Te'o should have started and [from 4:00 below] he gave his honest opinion on Sexton and Farrell in the 10-12 axis.

"I was surprised when I saw the team, I must admit," O'Gara began.

"I didn't think there would be any way Gatland would go for it [Sexton and Farrell at 10-12] considering the last 30 minutes, the last day. I don't think it worked. We under appreciate how good the All Blacks are. It works against most teams but, on Saturday, it didn't work when it shouldn't have." He continued:

"The idea was for the two of them to put shape on the game when they came in but I thought they lost shape. It didn't look like players were on the same wave-length. That's not necessarily the fault of Farrell or Sexton but it looked to be that... usually when you have two ball players, you have an idea of where you want to go, three or four phases ahead of everything.

"You know, for example, in five phases you want to be here and you'll have the front row ahead of you so you'll try to manipulate them. But I think that when they came the last day, because of the pressure New Zealand had exerted in the first 50 minutes, a lot of the Lions players were fatigued and not running good lines. There were not many passing avenues for the two lads.

"The one crucial element is that both of them are distributors. Neither are go to the line and go through the gap men either. Contrast that with Beauden Barrett and the speed of him... and his capacity to play what's in front of him and offload." 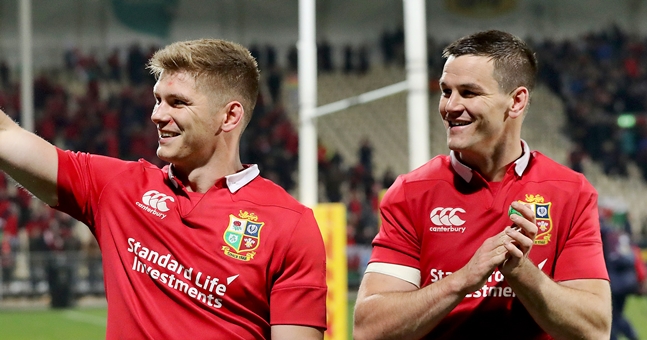 END_OF_DOCUMENT_TOKEN_TO_BE_REPLACED

O'Gara believes the fact that the Lions pack was on the back foot for long stretches of the First Test helped neither Farrell or Sexton, when he came on. Conor Murray suffered too and, box-kicks aside, did not show too much of an attacking threat.

"It's very hard to have a big tactical influence on the game when, even for a 10, he looked like an outsider," O'Gara said. He also raised an interesting topic about Gatland perhaps being convinced to go Sexton-Farrell by his assistant coaches Graham Rowntree and Andy Farrell.

"I think Gatland would have gone for Te'o. All day.

"It would have been interesting to know exactly what happened in that selection meeting. Is Warren handing over the baton?... It'll be interesting to see the body language between the [Lions] coaches on Saturday."

Must have been some meeting alright.


popular
"I went up to the Italians and gave them a big auld shoulder" - Paul O'Donovan does it again
Wexford Under-20 lights it up as Ferns win their first ever county title
Wexford, Waterford and Kilkenny down some good men as Australia calls
Man United have 'decided to sell' promising midfielder James Garner
Graeme Souness under fire for calling football a ‘man’s game' while sat with Karen Carney
Luke Chadwick recalls furious Alex Ferguson reaction when he rejected loan move
Erik ten Hag's training ground punishment for Man United shows there may be hope yet
You may also like
3 years ago
James Haskell's first Lions Tour encounter with Tadhg Furlong was certainly unforgettable
4 years ago
Garry Ringrose only needed two games to expose regrettable Warren Gatland decision
4 years ago
Warren Gatland reveals concerns about Fields of Athenry before Lions Tour
4 years ago
Ben Te'o was rightly livid after some sneaky jersey swapping on the Lions Tour
4 years ago
Two Ireland stars included in French outlet's Team of the Year
4 years ago
2017 ended the debate about Johnny Sexton being Ireland's greatest outhalf
Next Page