It was a tough call then, and it looked wrong then, too.

It was around this time last year that rugby fans in Ireland were asking aloud, and on every form of social media they could log into, why the hell Johnny Sexton was not in the British & Irish Lions squad.

James Ryan missing out was tough. Josh van der Flier and Garry Ringrose missing out were two more hard pills to swallow. Johnny Sexton taking the summer off while the Lions went to South Africa - that was lunacy.

END_OF_DOCUMENT_TOKEN_TO_BE_REPLACED

Sexton had been superb for Ireland in the 2021 Six Nations but Warren Gatland was not shy in telling everyone that he doubted if the outhalf could play three Test matches on consecutive weekends. 12 months on and Gatland could still use that argument and feel he was on solid ground.

This season, with Leinster's large squad putting them in a position to compete for trophies on both fronts, Sexton has been flying. He does not have to start each game, and he is delivering for Leinster and Ireland when they need him. He was very good last season, he has kept up that level, this season, but avoided any long spells on the sidelines.

Turning 37 in six weeks, Ronan O'Gara, his former Ireland outhalf rival, explains why the veteran 10 is still at the top of his game.

"First of all he’s a great competitor and he loves rugby," he said. "People forget that. Rugby is such a great game so you play it for as long as you can. If you’re good you keep going and he’s outstaying the rest in his position comfortably." 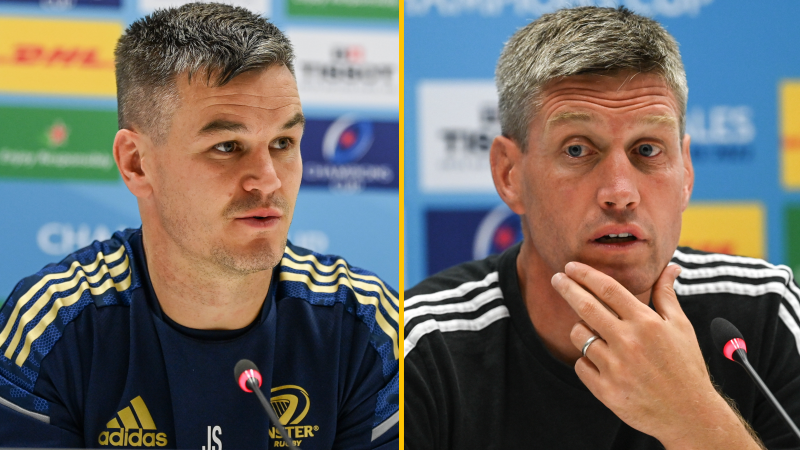 END_OF_DOCUMENT_TOKEN_TO_BE_REPLACED

There is a narrative out there - that Johnny Sexton has upped his game in the past season - but he has been superb this past two years [after the 2019 struggles and Covid delays].

For O'Gara - a former rival and now firm friend - he feels that Lions disappointment has forced him to up his running, attacking game.

"That would have hurt him deeply. So now it’s another example of his excellent resilience and now he’s coming back.

"I think he’s made changes to his game. He’s always been a good passer of the ball but now he’s become a threat again, which he may have put on the back burner. But you saw against Toulouse, he has a very good running game, a good passing game, a good kicking game and he’s very good at seeing the opportunity before other people see it.

"That’s what a lot of great 10s do, and he sees things quicker than other people and he’s able to manipulate his attackers and defenders into space because they’ve got great cohesion amongst them."

END_OF_DOCUMENT_TOKEN_TO_BE_REPLACED

In Ireland and in France, Johnny Sexton is a living legend. The way he is spoken about, abroad, is almost in loftier terms than he is, back home.

If he can add a fifth European Cup medal to his armoury, it is merely an extra gust of air in his balloon.


popular
World Cup 2022 Day Ten: All the major action and talking points
Iran demand action by FIFA after USA team change flag on social media
"I have equal love for football and hurling" - Sheehy set for two Leinster finals in two hours
World Cup 2022 Day Nine: All the major action and talking points
"I appreciate Moycullen now more than ever" - Cooke's American lifestyle from a Moycullen base
Canelo Alvarez duped by fake Lionel Messi Instagram post
For Ballyea, this journey all started out in a purple Toyota Corolla
You may also like
3 days ago
Former England international admits he wishes he had played for Ireland
1 week ago
Two baffling omissions as four Ireland stars make World Rugby 'Dream Team' of the Year
1 week ago
Josh van der Flier claims World Rugby Player of the Year at Monaco ceremony
1 week ago
"Highlight of my Ireland career" - Behind the scenes as Jack Crowley and Ross Byrne covered for a legend
1 week ago
Bundee Aki reminded us all of his best qualities, on a night Ireland couldn't do without him
1 week ago
Peter O'Mahony delivered some fitting Jack Crowley comments after surprise Test start
Next Page