That was the take of Barry Murphy when the prospect was raised, by an Irish supporter, of his former Munster teammate Ronan O'Gara being drafted into the Ireland set-up.

O'Gara has been coaching for five and a half years now, since his retirement from playing in May 2013, and he is currently with Super Rugby champions Crusaders. A three and a half season stint with Racing 92 has left him in good stead with French rugby and Midi Olympique and L'Equipe have both linked him with a job with the French national team.

The respected rugby outlets stated O'Gara was being considered for a short-term role, for the World Cup, with Jacques Brunel's France. Fabien Galthie has also been linked with coming on-board to assist Brunel and his existing coaching staff.

On Off The Ball, on Monday, O'Gara said he would 'always consider' a coaching offer from the FFR (the French rugby union) if 'there were the right conditions and you had an opportunity to work with players that I think are good players'. However, of the Midi story that claimed he was due to be confirmed as part of the France coaching set-up, he declared:

"That's farcical. I was learning more about it reading that than I knew myself.

"You can't be ready to sign after a conversation with an agent that has nothing to do with anything that goes on within [the FFR]. You need to get past the agent stage and try to get into the FFR before you are even talking ball park."

O'Gara did express an interest in one day getting involved with the Irish national team during the same chat. Getting O'Gara involved with Ireland was something discussed (from 55:00 below) on Baz & Andrew's House of Rugby after the conclusion of the 2019 Guinness Six Nations. 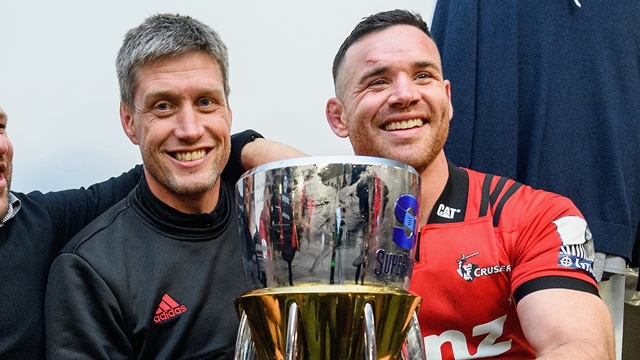 Former Ireland international Andrew Trimble started off doubting that Ireland boss Joe Schmidt, who looks after the team in terms of backs and attack coaching, would draft in O'Gara ahead of the World Cup. However, he was open to convincing.

TRIMBLE: Yeah, and he'll back himself. He always makes the point that it's not the play you do, it's the way you do the play. So, the game-plan that he implements, if everybody does their job, passes are accurate, breakdown is accurate, Joe is very confident on what he can deliver. And I think he'll remain confident.

MURPHY: He probably will. I mean it might help this side if you just bring in someone that might make them feel like there is a change, even though Joe is still running everything. But it might just, psychologically, give them a boost.

TRIMBLE: Yeah, maybe. A new voice maybe. Is that what you're saying?

MURPHY: Yeah, exactly. Yeah. Especially if it is someone they respect. Let's say Ronan O'Gara or someone like that... That will come in and just support and facilitate everyone that's there. But, you know, he's very good at doing something like that anyway, so.

MURPHY: I'd love to see something like that happen... You know, someone that can add to it. Then, yeah, why not?

Crusaders are 2017 and 2018 Super Rugby champions and, despite a weekend loss to Waratahs, are favourites to get to the final again this year. That final is in July, so O'Gara could conceivably jump from that posting and be seconded to Ireland for their World Cup camp.

Another option could be joining the coaching staff of Andy Farrell when he takes over from Schmidt, after the World Cup. Asked about that prospect on Off The Ball, O'Gara replied, "Of course. I was in Chicago this year for the Ireland-Italy game and I met the staff and I met the members of the IRFU and I would chat with them.

"You have to prove yourself elsewhere before you get an opportunity at the highest level of coaching in Ireland. That is what my focus at the minute - giving myself that option that they want me."

SportsJOE contacted O'Gara about the France job links but a reply was not forthcoming at time of publishing. The former Munster and Ireland outhalf was part of the coaching staff on the 2017 Ireland summer tour, as was Felix Jones.


popular
QUIZ: Name the blurred Premier League stars | Part 2
The SportsJOE 12 o'clock quiz | Day 7
QUIZ: How well do you know Manchester United players of the 90s?
The SportsJOE 12 o'clock quiz | Day 6
"I'd play 18 holes of Pitch n Putt" - Jack O'Shea's All-Ireland final prep pure class
The SportsJOE 12 o'clock quiz | Day 5
For Brennan, 'old-school' knock-out championship is the light at the end of the tunnel
You may also like
4 days ago
"The sacrifices they are making to save people's lives is heroic" - Jack Carty
4 days ago
"Everybody is in turmoil... we'd be oblivious if we thought nothing would happen to us"
5 days ago
"It's disappointing but a world-wide pandemic, what the hell?!" - John Cooney
5 days ago
Baz & Andrew's House of Rugby - John Cooney pitches in
1 week ago
"We all knew Brian O'Driscoll was good, but that's when we knew he was a genius"
2 weeks ago
Rory Best will forever cherish retirement gesture made by Furlong and Healy
Next Page