"They could see, 'Now I know what this crazy Irishman is about'!" - Ronan O'Gara

The Munster legend helped deny his old interprovincial rivals with a coaching masterclass.

Ronan O'Gara orchestrated a prolonged smack in the mouth for Leinster, then spent much of the post-match press conference praising them.

The La Rochelle head coach is a European champion for the third time in his storied career, and the first as top dog at a club. As an assistant coach, he won silverware with Racing 92 and Crusaders, but this, at Stade Velodrome, was the Ronan O'Gara Show.

END_OF_DOCUMENT_TOKEN_TO_BE_REPLACED

Stade Rochelais had the bigger pack and their bench packed a bigger punch. Leinster led for almost 70 full minutes of the Champions Cup final, but could not repel the French side in a sustained spell of pressure inside their 22. O'Gara's men were 21-17 down with 90 seconds to play, but led at the full-time whistle. Their bench emptied as players in yellow and black celebrated. The Leinster men were stunned.

"We made a plan and our want was huge," O'Gara said, post-match. "There was nothing in it, but the key was taking away Leinster's space and time." 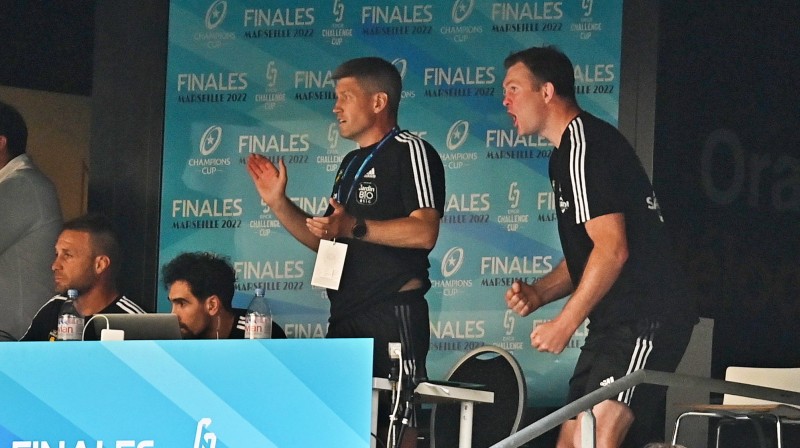 Are you joking me? - Ronan O'Gara

Taking his seat, flanked by two of his senior players and with the Champions Cup trophy sitting just to his right, Ronan O'Gara explained how he had told his players - trailing 15-10 at the break - they were right where they should be.

"Leinster are usually out of sight in the first half so at half-time - when we were five points behind - I asked the players, 'What's the problem?'. The data shows we score 60 per cent of our points in the last quarter.

"12 months ago we went to Racing and got beaten 49-0. There was fighting and it was carnage, but it will be carnage in the port of La Rochelle for the next few days after this... We knew, with Leinster, the last 20 was were we could get them.

"If we lose that at the end, we're a team of bottlers... three finals (lost) in a row. But this is a great starting point for the club."

This is a first European Cup triumph for the club side from the West coast of France. O'Gara spoke of how Leinster had set the bench-mark for European club rugby. It is the example Leo Cullen's men, he insisted, that they will strive to follow.

END_OF_DOCUMENT_TOKEN_TO_BE_REPLACED

"The boys were probably a bit shocked at how much I loved the competition... this was something new to them," the Cork native and, as a player, two-time winner commented. "Once we got a bit of momentum, they could see, 'Now I know what this crazy Irishman is about'!"

Considering how well La Rochelle stilted Leinster's attack while looking dangerous with the ball-in-hand, themselves, O'Gara was asked if he still would have been proud of his side's fight, had they not scored that late Arthur Retiere try.

"Are you joking me?!" came the incredulous response. "Happy to lose? We were all in today!"

"You have to spare a thought for Leo, Stuart [Lancaster], Felipe [Contepomi], Denis [Leamy] and all that coaching staff... for them, it's a massive kick in the balls."

Not for the first time, that day, O'Gara was bang on.

This particular kick will sting for a while.


popular
Mario Balotelli, Luis Suarez, Fernando Torres and why Rio Ferdinand "hated them"
"I remember just hugging this Irish guy" - How one Kiwi rugby star reacted to Ireland's historic series win
"I don’t trust you" - Joey Barton delivers brutal dismissal of Irish defender
Gatecrashed interviews and chip-shop previews - Wexford GAA's online coverage sets the standard
"I'll ask for everyone that comes to the game to wear purple and roots for us" - Pat Fitzgerald
The FootballJOE Pub Quiz: Week 49
Javier Hernandez offers to play for Manchester United for free
You may also like
2 days ago
"Everything’s done for you" - Eddie Jones on how private schools influence English rugby
4 days ago
Faf de Klerk knocked out after horror collision with knee of All Blacks winger Caleb Clarke
4 days ago
"We'll support him in any way we can" - Wallabies captain Michael Hooper backed for brave mental health decision
1 week ago
At a time when rugby needs genuine characters, Naitoa Ah Kuoi could not have timed it better
1 week ago
Eight Ireland players make final cut in 'World Class' 33-man squad selection
2 weeks ago
"There's no magic wand. A lot of it starts and finishes with hard work" - Ronan O'Gara
Next Page