A few years back, when he was coaching at Racing 92, Ronan O'Gara recalled some interactions with All Blacks legend Joe Rokocoko.

"You get a guy like Joe in there and he's so humble," said Ronan O'Gara.

END_OF_DOCUMENT_TOKEN_TO_BE_REPLACED

"At times you talk to him and you feel like he's in his first year of rugby, because he has such a pleasant manner and is so respectful. And yet at times, you want to go to him, 'Joe, you're one of the best wingers in the world... just do it, y'know?!'

What O'Gara took from his time in France, during his three and a half seasons with Racing, was that 'everyone needs coaching, guidance, and security and support'. Now into his seventh season as a coach, and his first in the hot seat with La Rochelle, O'Gara says he is still learning lessons on a daily basis.

The former Munster, Ireland and Lions outhalf was recently a guest on Baz & Andrew's House of Rugby and he spoke about a coaching journey that has taken him from Racing to La Rochelle via New Zealand powerhouses, Crusaders and a 2017 summer placement in the USA with Joe Schmidt's Ireland.

"I was coming from it by leaving Munster in May [after retiring] and being at Racing by July. My head was in a spin. That first 18 months of coaching, you so miss the game.

"I was kind of like, 'Where do I put out the cones?' People think that's funny but I hadn't done it for 15 years [when I was a player] and I've never done it before. I don't know, really, how this drill is going to work. It looked good when I drew it out on paper but it isn't played on paper.

"So you're really out of your comfort zone and it's really challenging. But I thought, I didn't know anyone and my role was different there as I was an assistant coach." 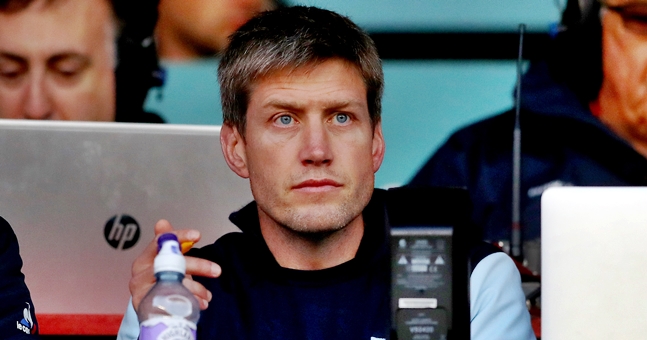 As he has noted in the past, O'Gara says his final few years as a player helped him make the transition to coaching as he had settled in his head that this was the route he wanted to take in his career. He began to pay close attention to player-coach relationships, how training sessions and reviews were organised and he took a more holistic look at the squad, rather than just focusing entirely on his own game.

"I learned a lot about the value of the squad," he says.

"For 10 years, you were undisputed and playing 10 every week. You're like, 'This is me. This is what I'm meant to do'. And then you get on the bench and you see things so differently, but it was so valuable to be able to appreciate, for example, the likes of your Trevor Hogans when he was at Munster.

"If you don't manage your 24 to 34 [senior players outside the matchday squad], you've no chance. They are the key people for me. These people have emotions, feelings, and they're really, really important. If you think being dropped is bad, what about the guys that never make it into the squad? Horrendous. But they have the exact same goals and ambitions as you have. They do the goal-setting, they do all the hill runs. You cannot... these guys are absolutely crucial. You have to make them feel like kings."

END_OF_DOCUMENT_TOKEN_TO_BE_REPLACED

O'Gara says that learning - that the third- and fourth-choice players for each position - are just as important for the squad environment as the regular starters.

If that was one of the big takeaways from his first stint in France, so too was putting your hand up for more responsibilities if you feel you have something to offer. O'Gara started off as skills and kicking coach at Racing and soon had the defence brief too. 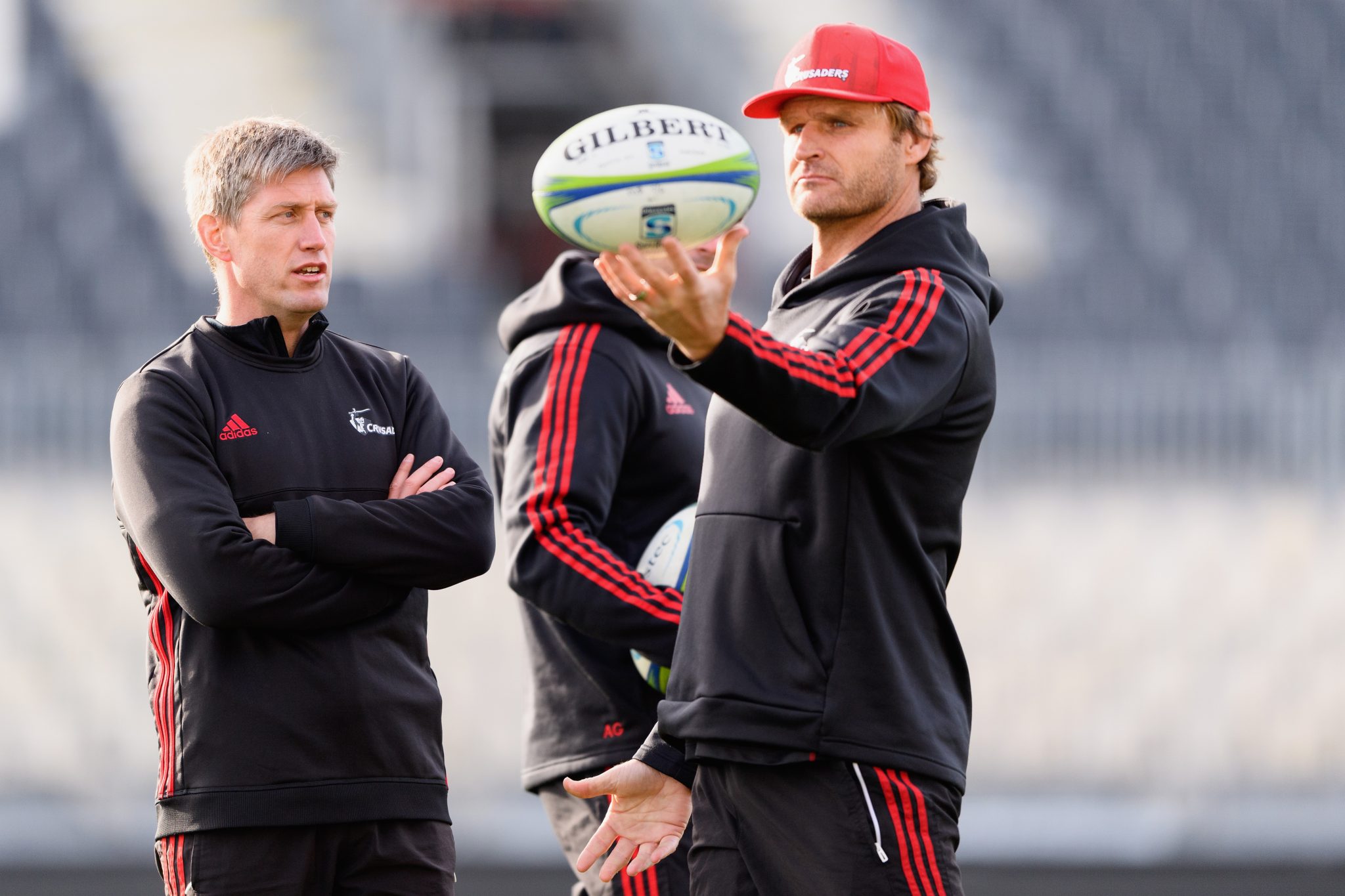 In 2018, he set off for New Zealand and joined up with Scotty 'Razor' Robertson at the Crusaders. In his two seasons there - both of which ended with Super Rugby titles - backs coach O'Gara saw how Roberston delegated his coaching staff, empowered players and sought to build up personal relationships within the entire organisation.

"Everything is about the squad. The one direction I got from Razor was basically - he trusted me in my unit work - saying, 'You've just got to connect with your players'. Everything was about connections - coffees, chats, discussions, growing ideas - but they present [ideas to the team].

"I was like, 'No, no, no, Razor, we'll do it my way'. For the first two or three months, I thought it'd be better if I presented... but you have your pre [game] meeting and they deliver the key points.

"It just empowers them. They take the responsibility. Their play. When they're under the pump, they've got to find solutions on the pitch. Thee's no point going, 'Well lads, we discussed this!' That's not the way. Rugby isn't played on a laptop. So many coaches think it is. You have 80 minutes of live rugby; they're not robots. That's the most important thing for me."

END_OF_DOCUMENT_TOKEN_TO_BE_REPLACED

With more lessons learned and seasons under the bonnet, O'Gara accepted the head coach job at La Rochelle under former Leinster [forwards] at Ulster coach Jono Gibbes. While the French outfit may have been eliminated from Europe they are well placed at 5th in the Top 14 standings and have a good chance of making the end of season playoffs for the Bouclier de Brennus.

While he'd like to think he is still "relevant" as he is not too long retired, O'Gara jokes that when he was just coming up at Munster, he would have looked at a 40-year-old and thought, "Jesus, that's old!"

Having people involved, in and around a team, that feel valued is the constant O'Gara has taken with him over his years coaching.

"If you keep telling someone that they're not really good at that, sure what are they taking home? He gets into his car after training and says, 'All this guy is telling me is that it can't be done'.

"You can do it, it just takes more time than you appreciate to break down habits or skills." But, he adds as the kicker:


popular
Nigel Owens on most annoying players to referee (three of them are Irish)
"I trained with a guy that was born in 2004 the other day. We reckoned Earlsie could be his father!" - Peter O'Mahony
Six All Blacks but no Ireland players in world's top 20 list headed by Antoine Dupont
"I remember someone saying, 'This guy's the best of the lot of them. Just wait for him'" - Brian O'Driscoll
What is the story with Tyrone clubs' woeful record in the Ulster championship?
"I asked one question and lads slagged the arse off me!" - Johnny Sexton on Roy Keane chat
Longford GAA movie explores the tale so many young footballers can relate to
You may also like
1 day ago
WATCH: This clip shows just how amazing amateur clubs in Ireland really are
1 week ago
Pieta and Shane Carthy encourage people to take part in #HopeOverSilence this Christmas
2 months ago
If you're looking for affordable health cover and 24/7 access to medical pros, this could be just the thing...
5 months ago
Forget counting your steps, this is the key metric you should be tracking instead
5 months ago
Football fans are going to love these brand new Cadbury chocolate bars
5 months ago
4 simple ways you can vastly improve the quality of your sleep
Next Page