Analysis: Just how good was Robbie Henshaw against England?

Bet the English rugby correspondent that predicted the Irish midfield would be exposed was feeling pretty chastened on Sunday evening.

The centre partnership of Robbie Henshaw and Jared Payne was under the spotlight all last week as pundits, fans and the opposition mused on potential weak-points in Ireland's Six Nations tilt.

The pair's defence has stood up to most challenges, thus far, but that attacking spark was absent. Payne has been solid, if unspectacular, while Henshaw's attacking contributions have been intelligent kicks in behind the South Africans and Australians.

END_OF_DOCUMENT_TOKEN_TO_BE_REPLACED

The pair almost connected for a try against Italy but Henshaw spilled Payne's pass forward, out wide.

We argued, in the days after the Italy game, that the duo needed more time together. On Sunday, they, and Henshaw in particular, offered a tantalising glimpse of the next three to four years of Irish rugby.

Focusing on Henshaw, the 21-year-old's bald statistics are 13 tackles, 11 carries, two kicks, two passes and one try - his first in Test rugby.

His first contribution of note was on 10 minutes and it was defensive. He shot out of the line to wrestle George Ford to the turf:

England retained possession and, in the same sequence of play, 20 seconds later, Henshaw was fortunate not to concede a penalty for going off his feet with hands on the ball in an English ruck.

Remarkably, Henshaw is back on his feet in double-quick time. 11 seconds after the ruck he is up and goes low on a charging Dave Atwood, which results in a huge tackle and [below] a spectacular picture.

Imposing himself on the defensive picture three times in 27 seconds. That is youth for you. 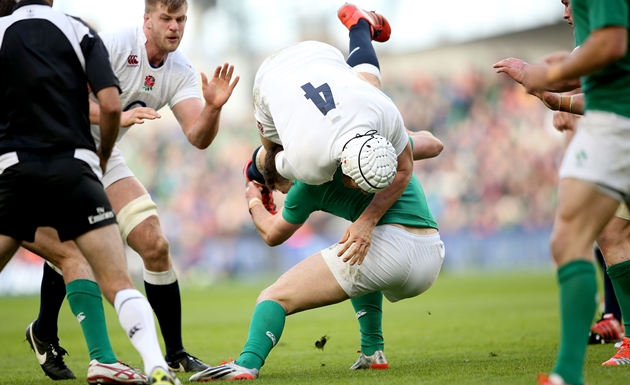 Still, England retained the ball each time and the phase of play ended with a successful Ford drop goal.

On 24 minutes, with Sean O'Brien getting assessed for concussion on the pitch, play rumbled on until Henshaw put in a great tackle on England 126kg Number 8, Billy Vunipola.

He stops Vunipola's charge with a strong shoulder before lifting the forward's left leg, twisting him and driving him to the ground. Rory Best does the rest with a poach for a turnover.

O'Brien was taken off, moments later, and replaced with Tommy O'Donnell. The loss of O'Brien did little to Irish momentum.

Henshaw and Sexton sprinted off the line, on 28 minutes, to double-team Luther Burrell. While Sexton held the centre around the waist, Henshaw lifted him backward and fiercely contested the ball. When Burrell failed to release, referee Craig Joubert whistled for an Irish penalty, right in front of the posts.

In now infamous Dylan Hartley shove on an injured Henshaw came on 32 minutes but, back on his feet and sprightly, the inside centre was almost through for a score.

O'Donnell had a great game and made a telling contribution was a fine reverse pass that led to a Henshaw line-break. It would have been a try, too, had it not been for the last-ditch ankle grab of England captain Chris Robshaw.

Post-match, Joe Schmidt commented, 'It was a bit bizarre, because Tommy hadn't run the play a lot and he had come in for Sean early in the game... With Tommy giving the offload to Robbie I thought he'd sneak through and create something there.'

Half time was soon called. Although there was no Henshaw score, on that occasion, one rugby pundit was impressed.

If I were handing out ratings now, I would give Henshaw 12! #IREvENG

Just after the restart, Henshaw showed great attacking instincts to fly-hack a Jordi Murphy offload forward. It put Alex Goode in trouble, under his posts, but, with Henshaw closing in, the Saracens man showed great evasion skills to get by him and two others; escaping to just outside his twenty-two.

Tommy Bowe has recently spoken about Joe Schmidt asking his wingers to often fill in as midfielders. This was evident in the lead-up to Henshaw's first Test try as both Zebo and Bowe did some ruck-clearing while Payne and Henshaw lingered on the right wing for a set-play.

Sexton ran a switch with Payne before finding Rob Kearney. He was taken down by a high, illegal tackle by Jonathan Joseph. The second best part of this try was Conor Murray's quick-thinking to signal Henshaw he was going with the chip:

The best part, of course, was Henshaw's leap, grab and score that should have Goode back with Saracens when Mike Brown returns.

The remainder of the match - the final 25 minutes - saw Henshaw required more so for his keen defence. He stayed on for the entire 80 minutes and, like his teammates, never lost discipline.

Captain Paul O'Connell meant every appreciative ounce of the bear-hug he gave his young teammate at the final whistle.

The hype would seem believable but Henshaw must now back it up against Wales and Scotland.


popular
Rangers legend says he and Roy Keane didn't speak during Man United spell
The coolest customer in hand-ball hoping to carry on the family tradition for Kilkenny
Rhodri Giggs accuses Gary Neville of hypocrisy over Salford sacking
Gary Neville reveals Man United ignored advice to sign Joao Cancelo
FootballJOE's Career Path Quiz: #6
"County football isn't for everyone" - Down captain Barry O'Hagan hits back at criticism
"I think there are only five Kilkenny players who are guaranteed to start on any given day" - Cody's motivational methods
You may also like
1 week ago
Josh van der Flier proving why Lions snub was so baffling in every single outing
2 weeks ago
Eddie Hearn hints at Katie Taylor v Amanda Serrano rematch in Ireland
3 weeks ago
England scrumhalf gets away with clear strike on Ireland's Michelle Claffey
4 weeks ago
Munster announce signing of French centre who can play for Ireland
1 month ago
Stacey Flood and Sam Monaghan star as Ireland get first Six Nations victory
1 month ago
Shamrock Rovers still look strongest of Dublin's five Premier Division teams
Next Page