A former Ireland bagman has the honour of resuming that role with the Lions.

The Lions schedule has been adjusted, and a new opponent will face the tourists in their opening game, on July 3.

The 2021 British & Irish Lions Tour to South Africa will have an added dash of green, as two familiar faces settle in with the back-room team.

END_OF_DOCUMENT_TOKEN_TO_BE_REPLACED

Gemma Crowley will travel to South Africa, this summer, as the Lions' Team Operations Manager. Patrick 'Rala' O'Reilly will make his fourth tour with the Lions as their bagman.

'Rala' was Ireland's bagman from 1994 until he retired from the role after the 2015 World Cup. Now aged 73, the Dubliner is gearing up for what will be - like head coach Warren Gatland and captain Alun Wyn Jones - tour number four.

A revised schedule for the tour, which will culminate in a three-Test series against the world champion Springboks, was revealed by South African broadcaster Super Sport earlier today.

This was how the original tour schedule looked [via Wikipedia], including the Murrayfield warm-up clash with Japan:

END_OF_DOCUMENT_TOKEN_TO_BE_REPLACED

The revised schedule has now ditched the 'South Africa Invitational' game on July 7 and included The Lions into the slate of games.

There will be a lot less touring now, with Johannesburg [four games], Cape Town [three] and Pretoria [one] the only cities the Lions will now play in.

Warren Gatland's side will start off their tour games on July 3 with a game against the Lions, before taking on the Sharks on July 7 in a midweek fixture.

END_OF_DOCUMENT_TOKEN_TO_BE_REPLACED

Next up are the Bulls, on July 10, before another midweek game against South Africa 'A'. The final chance players have to impress, in terms of Test selection, is a July 17 game with the Stormers.

There are no midweek games once the Test Series commences, with the first game in Cape Town and the final two back in Johannesburg. 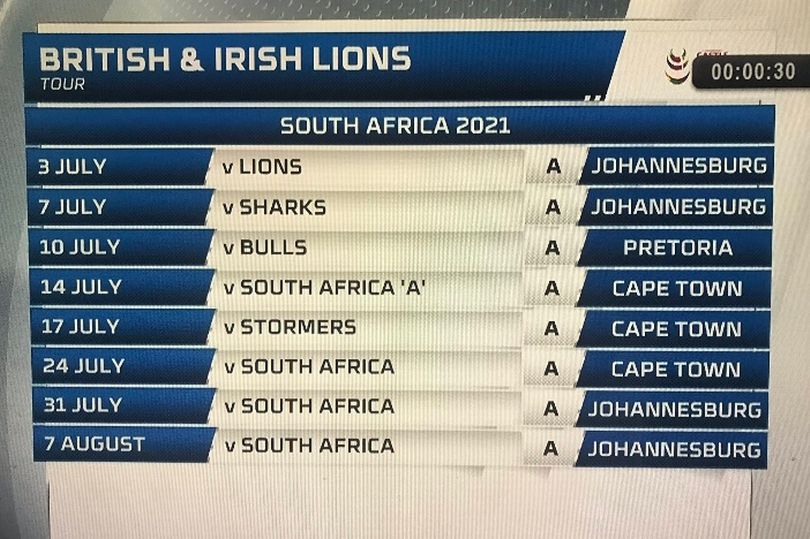 The cities missing out on the Lions fanfare are Port Elizabeth, Durban and Nelspruit.

Warren Gatland named his 37-man squad on Thursday, May 6, and has selected a squad that will be big on physicality, but with a few players capable of sprinkling magic on affairs.

The Lions are expected to officially confirm the revamped tour schedule in the coming days. It is still hoped that some fans could attend the games, but the best South African rugby officials could hope for would be half-full stadiums.

It will be a Lions Tour, all right, but not as we know it.


popular
Gearoid Hegarty's harsh red card leads to a heated debate in The Sunday Game studio
French media rave about Caelan Doris and 'Playstation rugby' from Leinster
Somehow, we all may have underestimated Johnny Sexton
Austin Gleeson sent off as Seamus Harnedy stands up again with an absolute stormer
Erik ten Hag terminates contract with Ajax early to start work at Man United
Liverpool and Chelsea fans go viral after bizarre FA Cup final confrontation
Rory Gallagher absolutely loses his mind celebrating as Derry beat Monaghan in Ulster semi-final
You may also like
4 days ago
"He could be one of the world's best" - Sean O'Brien on rugby's latest speed demon
4 days ago
Picking the best sporting moment of the past decade is not simple
4 days ago
"I've probably watched every single Paul O'Connell speech" - Kyle Sinckler
4 days ago
"I hope we are all clear now" - Chris Ashton on post-match apology to James Lowe
5 days ago
James Lowe calls on Leinster fans to give Toulouse fans red-hot welcome
5 days ago
'I've met some of my best friends playing here' - Rugby, Canadian style
Next Page