The PRO14 have swapped six teams from their conferences for the upcoming 2019/20 season.

The Irish teams have retained their split with Ulster once again joining champions Leinster while Connacht will join Munster in conference B.

Leinster and Ulster move from conference B to conference A where they will join the Ospreys, Dragons, Zebre, the Cheetahs and last season's finalists the Glasgow Warriors.

Meanwhile Munster and Connacht will be joined in conference B by Cardiff, Scarlets, Edinburgh, Treviso and the Southern Kings.

Using the Conference tables completed after Round 21 of the 2018/19 Guinness PRO14 season, teams were ordered from one to 14 based upon their final points totals and then ranked within their union.

The criteria for placing teams in each Conference relies on competitiveness and ensuring an equal spread of teams from each union are present in both Conferences. As a result, the Conferences for the next two seasons are as follows: 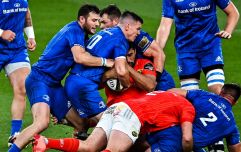 END_OF_DOCUMENT_TOKEN_TO_BE_REPLACED


popular
The SportsJOE 12 o'clock quiz | Day 186
Sam Bennett's green jersey masterclass got Lance Armstrong talking
Only old-school fans will get 20/20 in this 1990s footballers quiz | Part 2
How The Mountain lost 36kg ahead of boxing fight with The Beast
Rio Ferdinand story about Dwight Yorke conversation shows Alex Ferguson's ruthless streak
"If the GAA can't organise these small crowds in big stands, it's not a great look for them"
"He's found a way to do it. Whether that's good or bad for the game, I don't know"