Quinn Roux, Stu McCloskey, Marty Moore, Tom Farrell, Jack O'Donoghue and Sean Reidy are among those that have already missed out on the training squad while the uncapped Mike Haley and Jean Kleyn have both been added to the mix.

Schmidt and his coaching staff will have to cut their squad down to 31 by September after Ireland's pre-World Cup warm up matches with Italy, England and Wales but who at this stage makes the cut. 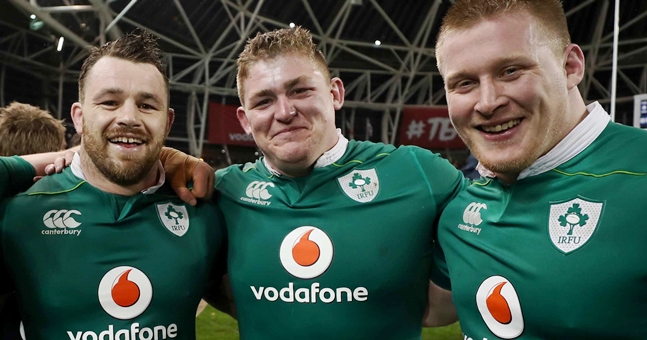 Those that miss out: Dave Kilcoyne, John Ryan

It's hard to look past the longtime Leinster quartet of Furlong, Healy, McGrath and Porter. Furlong and Healy are genuine world beaters at their respective positions, McGrath is still a Lion and probably still edges out Kilcoyne here, although that gap has shortened over the years, while Porter can have a devastating impact off the bench.

Bealham probably edges out Ryan and Kilycoyne due to how comfortable he is playing both loosehead and tighthead.

END_OF_DOCUMENT_TOKEN_TO_BE_REPLACED

Those that miss out: Rob Herring

Best is still captain so that all but assures his place in the squad while Cronin was arguably the best Irish player this season with an incredible 13 tries in 20 games. You figure they're all but certain to go to Japan which leaves it to Scannell and Herring.

Scannell was selected in two Six Nations matches while Herring last featured for Ireland in the November internationals last year in a mauling of the USA. Will most likely have to impress in the warm-up games to kick Scannell off the plane.

Those that miss out: Ultan Dillane, Jean Kleyn

END_OF_DOCUMENT_TOKEN_TO_BE_REPLACED

Some fairly straightforward selections here. Ryan is among the best locks in the world so he's locked in here. Tadhg Beirne was nominated for the PRO14 team of the season and is one of Munster's best. Toner was superb for Leinster and Ireland before his ankle and knee injuries in the second half of the season and should walk in here, if healthy, given his improved all-round play and line-out dominance.

Henderson gives you mobility and added versatility in that he can hop in at the blindside if needed, which gives Schmidt and Ireland another great jumping option, while Kleyn has been massively impressive as a starting second-row with Munster but has no previous experience as an international and will have to tear up trees at Carton House to displace the aforementioned.

He's proven to be an 80-minute player with the Reds and if you are already in a situation where you have Ryan and Toner starting with Beirne/Henderson off the bench, do you really need another impact player like Dillane?

The Connacht lock has started just three of his 14 Tests over the last three years so it's plausible at this stage to think he's not going to play a major part at the tournament. 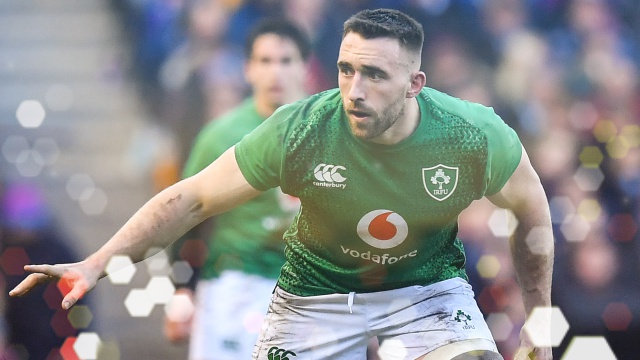 END_OF_DOCUMENT_TOKEN_TO_BE_REPLACED

With Sean O'Brien and Dan Leavy both ruled out through injury, the backrow has become a bit easier to sift through with Jordi Murphy and Rhys Ruddock both seeing their stock go up.

Stander, O'Mahony and van der Flier will most likely start while Ruddock has captained Ireland at numerous stages in the past and can also provide second-row cover.

Murphy can serve as competition for openside after playing there all season with Ulster as well as being able to cover the other two positions across the backrow.

O'Donnell has been ravaged by injury over the last few seasons and has not played for Ireland since the 2016 Six Nations. He'll have to seriously impress in training and in the warm-up matches to dislodge one of the aforementioned.

It realistically comes down to Ruddock v Murphy for the last spot with Conan hugely impressive at number eight for Leinster this season. Murphy's added versatility may give him the nod as well as the fact that he'd be the only real secondary option at seven should anything happen to van der Flier, even though O'Mahony can also cover there.

Those not selected: Luke McGrath

It's one of the toughest positions to select players in the squad. Murray, despite his relatively underwhelming Six Nations, is still the best scrum-half in the country and is certain to go. Then it comes down to two seats for three players.

Marmion has been one of Schmidt's favourite players over the last few seasons and has generally been viewed as Murray's deputy, while Cooney has saw more involvement over the last year playing in four Six Nations matches while McGrath sat out with injury.

Cooney's goalkicking gives Ireland another wrinkle in the event that Sexton cramps up during the second-half of games and probably edges McGrath for the third spot, despite McGrath enjoying a wonderful November series.

It really is a coinflip here but maybe Cooney's goalkicking sees him win a spot on the plane.

Those not selected: Ross Byrne

The simplest way of looking at this is Sexton is the reigning World Player of the Year so he's locked in.

Carbery was the highest points scorer in the Champions Cup Pool stages, and the main deputy to Sexton, while Carty edged Ross Byrne in the Six Nations squad selection and only strengthened his case with selection in the PRO14 Dream team.

Byrne is clearly talented and rarely puts a foot wrong but it's hard to see how he'll have displaced Carty in Schmidt's eyes since the end of the Six Nations.

Those not selected: Rory Scannell

Aki, Henshaw and Ringrose serve for great selection debate any time all three are fit and available, which is a rarity over recent seasons. They're as much as automatic selections as you can get while Farrell as the fourth centre would provide nice balance given that Henshaw and Aki are predominantly inside centres while Farrell would be a good alternative to Ringrose at outside. Power v finesse.

Rory Scannell, while a nice option as a playmaking 12 that can kick, has just not been able to make a serious dent in the Six Nations squads or the meaningful November internationals and it's hard to back him dislodging any of the aforementioned. 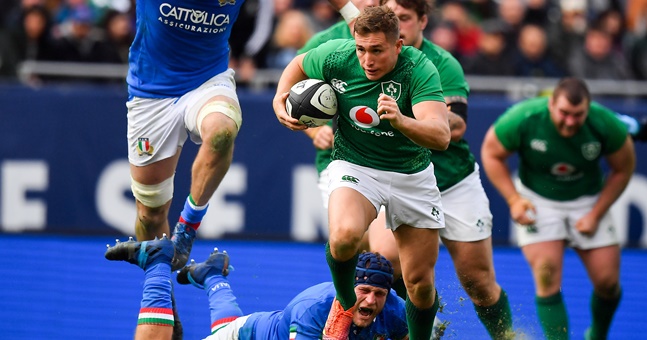 Stockdale, Earls and Kearney have formed the nucleus of Ireland's back three for the last two seasons and will most likely start the meaningful games in Japan while then it comes down to picking one out of four between Dave Kearney, the uncapped Haley and Larmour and Conway.

Put simply, Larmour and Conway are gamebreakers. Whether it's at full-back or wing, they can change games with their pace and ability to beat defenders in a way Kearney and Haley cannot replicate in the same way.

Conway and Larmour are certainly talented enough to start in any Irish team and definitely talented enough to make the plane but Larmour probably just edges him. He's the biggest gamebreaker in Ireland and it's very hard to see an Irish plane departing for Japan without him on board.


popular
The SportsJOE 12 o'clock quiz | Day 76
SportsJOE 2000s Football Quiz | Round 4
The SportsJOE 12 o'clock quiz | Day 75
Promoter teases Pacquiao-GGG superfight, but fans are having none of it
Here's a list of 23 people who own a greater share of the UFC than Conor McGregor
Israel Adesanya's rise should serve as a lesson to every young fighter
WATCH: The only man to score a victory over Jon Jones brutally knocked out by Sokoudjou

You may also like
6 days ago
You'll be hard pushed to get full marks in this Serie A quiz
6 days ago
Nigel Owens on how the O'Driscoll and O'Connell captaincy dynamic worked
6 days ago
Tadhg Beirne on the Wayne Pivac request that helped change his career
1 week ago
Baz & Andrew's House of Rugby - Tadhg Beirne and John Cooney
1 week ago
'We knew how much it meant to them' - Conrad Smith on Croke Park history lesson
2 weeks ago
"He walks into the dressing room and Pienaar goes, ‘We can’t win’!"
Next Page