Poll: Would you start Johnny Sexton or Joey Carbery against Italy?

It's no so much a fly-half controversy as much as it is a necessity to get Joey Carbery some gametime.

Carbery has played just 22 minutes since Ireland's November win over Fiji, and given England's 31-point win over Conor O'Shea's side last weekend, and Ireland's 53-point demolition of the Azzurri last year in Rome, there have been calls for the 22-year-old to start on Saturday.

The Leinster utility was an unused substitute against France last weekend, although he was seen warming up on the sidelines in the final few minutes of the match.

Thankfully, he remained on the sideline. Not to say that he wouldn't have nailed a 45 metre drop goal in the 82nd minute after 41 phases and a crosskick to Keith Earls, not to say that all, but Johnny Sexton was certainly the right man for the job when the opportunity presented itself.

A sub-par Italy, who have only defeated Ireland just once since 1997, have given Ireland head coach Joe Schmidt a chance to consider some changes ahead of the Triple Crown trifecta of Scotland, Wales and England.

“We have such a strong squad, we do feel comfortable in every player so we'll have a look at it," said Ireland assistant coach Richie Murphy about the possibility of making some changes on Tuesday morning.

“Jordan Larmour is very close to it, he has learned very quickly. It's not that we don't think he's ready but we'll have a closer look at it.

“Joey Carbery hasn't had a massive amount of time through injury and at Leinster he has mostly played full-back.

“We can't guarantee what time he will get this week, we can't plan on that basis because you don't know what is going to happen."

You can't guarantee what will happen but with only one loss in the last 23 matches against the Italians, there's some things that you can predict with a relative degree of certainty. 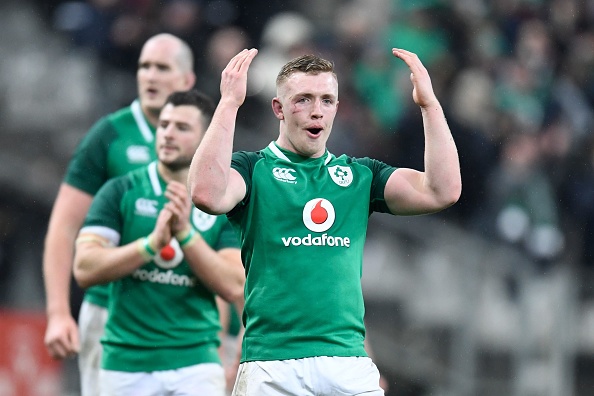 You can predict that Dan Leavy will replace the injured Josh van der Flier. You can predict that James Ryan will retain his spot in the second row and you can predict at some point - with Johnny Sexton's propensity to attract physical attention from the opposition, and with Joe Schmidt's seeming fixation on playing Carbery at fly-half instead of full-back where he has spent the majority of the last year playing - that Ireland will need to call on Carbery.

Schmidt made clear on Saturday that Carbery is his preferred deputy to Sexton with Munster fly-half Ian Keatley left out of the Ireland matchday squad.

There's certainly an argument to be made that Carbery should start if he is to be the deputy. You don't want to be in the thick of it with the game on the line against Scotland, Wales or England and your backup outhalf, playing behind a player who has shown that he can be taken out of a game at any moment, has made just two passes and two runs since the middle of November.

That's not a good situation to find yourself in when the championship is up in the air.

However, there's also an argument that Sexton is the last player you want to swap out this weekend. That as Ireland's man of the match in Paris, there is no way you should possibly disrupt his momentum and that you need to ride the hot hand.

There's also the fact that there's no Robbie Henshaw or Gordon D'Arcy playing outside of him. Unless Bundee Aki is ruled out later this week, it's highly probabe that the Connacht midfielder will once again line up outside of Sexton this weekend.

It may only be Italy at a sold out Aviva Stadium, but Sexton and Aki should be using every possible opportunity to build chemistry and further develop their on-field understanding.

Besides, it's not as if Ireland were making any great shakes with their attack last weekend as they failed to muster up a single linebreak despite boasting 68% of possession in Paris.

Even Sexton's patented wrap around was to no avail as Ireland were starved of try scoring opportunities in a turgid affair.

There's arguments to start both Carbery and Sexton against Italy, but if I'm Joe Schmidt, I double down on my starters and continue to ride with Sexton.

Carbery could score two tries and have one of the finest individual performances since Dance Carter's 33-point haul against the British & Irish Lions in 2005 and he's still going to come nowhere near overtaking Sexton in the fly-half pecking order.

As long as Schmidt views Carbery as a 10, and not as a 15 where there are reasonable grounds that he could start the rest of the tournament based on his pre-Novmber form, Sexton has to start.

You need to make sure your first-choice starters are firing on all cylinders before you start worrying about how much gametime your deputy receives.

You can't worry about the cart if you start meddling with the horse.