PIC: Paul O'Connell having the craic at Stade de France has instantly raised our spirits

Life after rugby ain't so bad.

Paul O'Connell is in Paris today on match pundit duty for the BBC.

The former Ireland captain was forced to retire during the week after a debilitating hamstring injury and there was a collective outpouring of gushing tributes and grief.

END_OF_DOCUMENT_TOKEN_TO_BE_REPLACED

O'Connell will take time out before deciding on the next step in his post-rugby career. For now, he should be well compensated for his analysis and opinion on today's match broadcast.

O'Connell will be joined by another Irish legend, and captain, Keith Wood for the coverage while injured Ireland winger Tommy Bowe will be on duty for BBC Northern Ireland.

Before this afternoon's game, the 36-year-old caught up with Wood and Bowe to reminisce on times gone by and to have the craic. 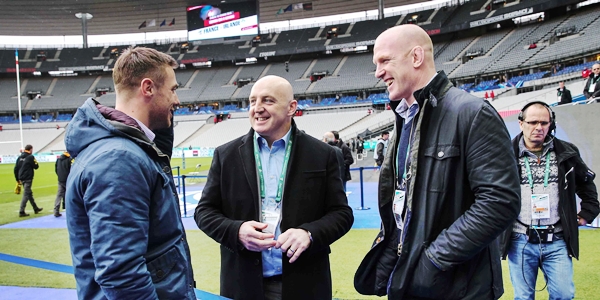 The Irish No.2, 5 and 14 jerseys will be occupied by Rory Best, Devin Toner and Andrew Trimble today. A lot to live up to.

The Ireland dressing room is all set up #ShoulderToShoulder pic.twitter.com/5KOZ4nLbFI


popular
Mario Balotelli, Luis Suarez, Fernando Torres and why Rio Ferdinand "hated them"
"I remember just hugging this Irish guy" - How one Kiwi rugby star reacted to Ireland's historic series win
"I don’t trust you" - Joey Barton delivers brutal dismissal of Irish defender
FootballJOE's Career Path Quiz: No.5
Gatecrashed interviews and chip-shop previews - Wexford GAA's online coverage sets the standard
"I'll ask for everyone that comes to the game to wear purple and roots for us" - Pat Fitzgerald
Man United target two new forwards as desperate search for a striker goes on
You may also like
1 week ago
“My confidence was on the deck" - Aaron Connolly explains why he has made the move to Italy
2 weeks ago
Every Irish transfer in football, this summer, as several big deals get done
2 weeks ago
Six Irish players make damn impressive 'World XV' that would take some beating
3 weeks ago
The frontrunners for Ireland's 33-man squad for the 2023 World Cup
3 weeks ago
All Blacks media manager explains why Ian Foster appearance was cancelled after Ireland defeat
3 weeks ago
Warren Gatland selects nine Irish players in his strongest Lions XV, right now
Next Page