Peter Stringer was never going to have the Herculean stature of your typical international rugby star but what he lacked in size, he more than made up for in character.

The legendary scrum-half, who signed a one-year deal with Sale in May, was renowned for being the smallest player on the park as early as under-8 level and he has one particular story that sums up how people have always judged him on his size. 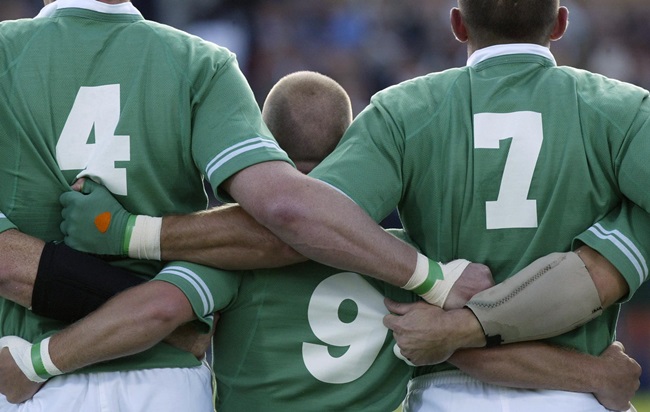 The story, told in his book Pulling the Strings and serialised in today's Irish Times, reveals that he was actually mistaken for a mascot when playing school's rugby.

'No one ever said to my face, “You’re too small”. But in later years Mum told me some of the stories. She recalled one specific under-13 game when Pres travelled to Dublin to play Blackrock College.

'As I was captain of the team, I led them out, followed by one of the secondrows.

'Some of the Blackrock mothers were on the sidelines. “Ah look, they brought a mascot out on the pitch.”

'“No, no,” Mum said to them, “he’s actually the captain of the team.” That shut them up, but Mum constantly had other parents approaching her on the side of the pitch while I was playing, with comments like: “He’s too small” or “He’s going to get hurt” or “How can you stand by and watch him out there?”'

At 5 ft 7 in and 72 kgs, which he has maintained throughout his senior career, Stringer is never going to instil fear in opponents with a commanding physique but that never stopped him from stopping the big lads dead in their tracks.


popular
Kerry's captain selection for 2022 sums up the problem with their outdated system
From Canada to Carlow in the name of hurling: Nicolas Redmond's journey to the Fitzgibbon Cup
"It must be difficult to say no, having won a game and heading back together"
Chelsea forced to change Stamford Bridge changing room after Liverpool complaint
Eddie Jones shares great tale on hour-long chat with 'inspirational' Roy Keane
Jesse Lingard 'angered by lack of respect' shown by Man United
Ireland fitness update offers even more reason for Six Nations optimism
You may also like
20 hours ago
"I have to come into this camp and do what I can to get the No.2 jersey" - Rob Herring
21 hours ago
"It's not a stepping stone any more" - Connacht pride in Test-ready stars
1 day ago
"I had a point to prove" - Conor Oliver on choosing Connacht over Leicester Tigers
5 days ago
"I saw a skinny boy from Ireland, standing in a big goal" - Jurgen Klopp praises Caoimhín Kelleher's development as a goalkeeper
6 days ago
Predicting Ireland's starting XV for Wales after Andy Farrell squad announcement
6 days ago
Jamie Heaslip delivers Jack Carty reality check, hours before Ireland call-up
Next Page