Given the season Peter O'Mahony was coming off, this speech was all the more poignant and intense.

He was captain of a Munster team that was rocked to its core by the death of coach Anthony Foley [O'Mahony's idol growing up] and that somehow rallied to reach a Champions Cup semi final and the PRO12 final. Days after Foley's tragic passing, O'Mahony recalled:

"I grew up following him around the place, even though he didn't know it. And then to be allowed come in and rub shoulders with guys like him... he had just finished playing when I came into the academy and my developmental contract.

"But for him to be around and to be allowed talk to him and be in his presence was a dream come true at the time."

END_OF_DOCUMENT_TOKEN_TO_BE_REPLACED

For Ireland, O'Mahony missed the heroics of Soldier Field but led Ireland to victory over Canada and proved a fearsome impact sub until he go another starting chance against England and grasped it with both hands. His performances against England and, two weeks later for Munster, Toulouse saw him go from Lions outsider to squad member.

He then went further than that with superb outings for the Lions against Crusaders and New Zealand Maori and was bestowed the honour of captaining them for the First Test against the world champion All Blacks. 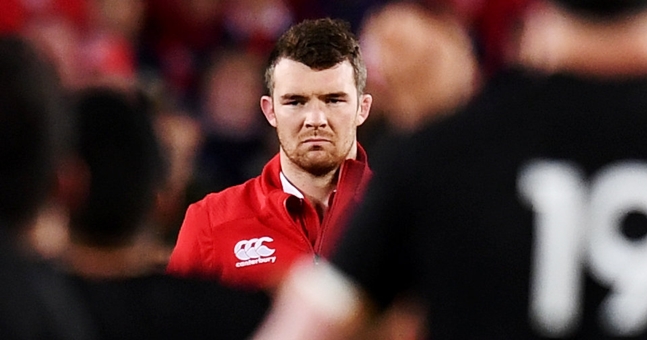 END_OF_DOCUMENT_TOKEN_TO_BE_REPLACED

In The British & Irish Lions: Uncovered documentary of the summer tour, O'Mahony is not focused upon as a central character. Tour captain Sam Warburton, Stuart Hogg, Kyle Sinckler and Sean O'Brien all get a lot of air-time while CJ Stander provides some colourful commentary during the Test Series.

O'Mahony does not speak much but, when he does, he gets his points across.

Days after that game, O'Mahony is made captain in a strangely muted team announcement led by Lions head coach Warren Gatland, Mako Vunipola and George Kruis congratulate O'Mahony, who spends much of the announcement staring a hole in the floor.

END_OF_DOCUMENT_TOKEN_TO_BE_REPLACED

We do not get to see if the Cork native spoke on the night before the game, when Brian O'Driscoll handed out the jerseys, but we definitely hear him in the huddle before that First Test. With his teammates gathered round, O'Mahony delivers a fiery speech:

"From the first second you take to the pitch, it's non-negotiable today.

"Everything after that is cool, collected discipline to it that they can't live it.

"Everybody's got to fucking see it!"

The Lions certainly fronted up in the first half of that electric encounter but the All Blacks took the spoils in the First Test. Perhaps the result is the only thing that will prevent O'Mahony's words from going down as one of the best in all-time Lions history.

Warburton returned to captain the Lions in the Second and Third Tests but it is heartening to see how much that series comeback means to him. In the Third Test, the camera rests on O'Mahony as Elliott Daly takes a kick that will get the Lions back to within three points in the drawn game.

"Go on ta fuck, ye!" he bellows as the kick eeks its way over.

Intensity, even from the stands.

The British & Irish Lions: Uncovered is on official release from November 13 and is well worth the watch.


popular
Get him a tuxedo, give him the All-Star and for crying out loud, someone bring that man out to America
Fans react to Tottenham Hotspur's 'brilliant tease' for Richarlison signing
Tiernan Kelly and three other players hit with ban following tunnel brawl
Southampton pay tribute as Shane Long leaves the club after eight years
Quiz: Name the players these famous footballers played alongside the most times
QUIZ: How well do you know Manchester United players of the 2000s?
The race to be the championship's top scorer this season is unbelievably close
You may also like
1 day ago
Your guide to an incredible weekend of sport and how to stream it all
2 days ago
Gavin Coombes one of four Irish players to push themselves into Test picture
2 days ago
Bundee Aki understandably emotional, as Ireland pay moving tribute to late Sean Wainui
2 days ago
Full Ireland player ratings after Maori All Blacks teach us an early lesson
2 days ago
"We could lose all five games" - Darren Cave with a rare take on Ireland's chances
3 days ago
Mike Lowry and Peter O'Mahony in First Test contention as Ireland shuffle deck
Next Page