Munster vs. Connacht is always spicy. Tonight was no different.

Peter O'Mahony sticking up for his teammates before it all kicks off and in front of a baying crowd. Great to have rugby back.

Munster welcomed Connacht to Thomond Park on Saturday night as they sought to keep up their winning start to the league on a night when they paid tribute to Anthony Foley.

Ahead of the United Rugby Championship encounter in Limerick, there was a standing ovation for 'Axel' on the five-year anniversary of his tragic passing in Paris.

Munster fans give a standing ovation for Axel as the players run back to the sheds pic.twitter.com/1F3yo0vkHd

Connacht came into the contest with only one win from their opening three games, while Munster were on a three-game winning streak.

If few were backing them, Andy Friend's side got off to a great start. Two Jack Carty penalties had Connacht 6-0 ahead after 20 minutes, with each and every player from the visiting side fronting up.

The niggle and afters from both sides ramped up the early tension and, after Niall Scannell had been turned over, Peter O'Mahony clearly had enough. Scannell was still holding onto the ball as he looked to stand up, prompting Paul Boyle to step over to demand it.

With Boyle standing over Scannell, trying to wrestle the ball free and giving the hooker an earful, over barrelled O'Mahony to clear the Connacht No.8 away.

END_OF_DOCUMENT_TOKEN_TO_BE_REPLACED

Over on Premier Sports, commentator Ryle Nugent stated, "There was no need for Peter O'Mahony to come in, there."

Referee Chris Busby pulled O'Mahony, who was making his 150th Munster appearance, to one side to chide him for the incident. The blindside was giving nothing away and declared he had enough of the Connacht players' antics.

"He's standing over him there. I won't let that happen," he declared when pointing out Boyle's clash with Scannell.

Just six minutes later, O'Mahony was slightly more contrite when both he and Connacht captain Jack Carty were called over for another Busby scolding about comments and shoving after the whistle. 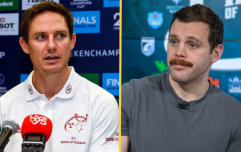 END_OF_DOCUMENT_TOKEN_TO_BE_REPLACED

Connacht thought they had well and truly pulled clear when Mack Hansen dived over in the corner, but play was called back for a borderline forward pass by Tiernan O'Halloran.

A feisty first half ended with Sam Arnold being yellow-carded for a high tackle on Mike Haley and Bundee Aki coming up with his third turnover of the opening 40 minutes.

And yet, Munster were not done yet. A lovely Rory Scannell chip to the wing was hacked on by Tadhg Beirne with the ball spinning to Chris Cloete for the score. Joey Carbery converted and Munster led 7-6.

Connacht hit back with tries from Paul Boyle and Jack Carty but Diarmuid Barron's late, converted try won it for the hosts.


popular
Nigel Owens on most annoying players to referee (three of them are Irish)
"I trained with a guy that was born in 2004 the other day. We reckoned Earlsie could be his father!" - Peter O'Mahony
"I remember someone saying, 'This guy's the best of the lot of them. Just wait for him'" - Brian O'Driscoll
Six All Blacks but no Ireland players in world's top 20 list headed by Antoine Dupont
What is the story with Tyrone clubs' woeful record in the Ulster championship?
"I asked one question and lads slagged the arse off me!" - Johnny Sexton on Roy Keane chat
Longford GAA movie explores the tale so many young footballers can relate to
You may also like
1 week ago
Munster's season thrown into crisis after more Covid positives confirmed
1 week ago
Munster and Cardiff remain in Cape Town as new Covid strain confirmed in Welsh squad
2 weeks ago
"The gap just opened up... I had to take it!" - Craig Casey on making every chance count
3 weeks ago
"I take great solace that others won't know the pain we know" - Axel's life-saving legacy
1 month ago
Joey Carbery put through the wringer before winning it for Munster
1 month ago
The Leinster and Munster tries that should have both sets of fans excited
Next Page