For the first time since he broke into Munster's senior squad, almost 11 years ago, Peter O'Mahony has had the opportunity to rest up his body. From 2009 onwards it had been relentless. Even off-seasons were never truly 'off'.

Players would go on summer breaks for two or three weeks and take it easy for the first before finding a gym or heading out on bikes on for jogs. Always aware that the skin-fold tests, gym and pitch sessions were never far away.

The elongated pause in the rugby season, caused by the Covid-19 pandemic, has afforded some hard-pushed rugby professionals the opportunity to heal up. Most of them haven't had contact (training or in matches) since early March and the rugby season is not set to resume until mid August.

All four Irish provinces are back, however, and each senior player is going through their second pre-season of 2019/20. For each one, across the provinces, that means running The Bronco. That exercise involves players lining up on one end of the pitch and running 20 yards, then back, increasing the run to 40 (and back) then 60 (and back), and doing that five times.

To make matters worse, down Munster way at least, their senior squad are doing 'Broken Broncos'. It means running those Bronco shuttles fiver different times in the space of an hour. In short, it is as brutal as it comes. Munster captain Peter O'Mahony tells us:

"Yeah, we were in the same boat there all week. I'm not built for long-distance. I'm firmly short-distance and even at that I'm not particularly good either. So, yeah, career-ending stuff, those broncos!"

"I think Richie McCaw was around 4:30, I think. I was a long way off Richie McCaw, now, unfortunately!

"The scrum-halves and back threes would cover a lot of ground in games so they're ultra-fit, these guys."

The likes of Keith Earls, Joey Carbery and Damian De Allende are all easing back into their returns but, when they leave the rehab pods, The Broken Broncos await.

📸 All smiles from captain @PeterOM6 and new signing RG Snyman as we complete week one of our mid-season pre-season! 🙂#SUAF 🔴 pic.twitter.com/jATEcbs6sN

END_OF_DOCUMENT_TOKEN_TO_BE_REPLACED

O'Mahony - speaking to SportsJOE as part of the GreenAware #DoBitsHelpLots campaign - is enthused about getting back playing next month. As a proud Cork native, O'Mahony is delighted to see so many of Munster's next generation are pushing through from The Rebel County. He mentions the likes of Fineen and Josh Wycherley, Liam and Gavin Coombes, Shane Daly and hooker Diarmuid Barron as ones to follow closely.

"These guys are going to make a difference. There's lots of guys that I haven't named there that are sticking their hands up, from an academy point of view and development. Guys coming into senior contracts like Alex McHenry.

"I past a few of them over the past few days, the academy boys, and they've turned into small monsters over the past few weeks. Thomas Ahern was a long second row and, all of a sudden, he looks like an international second row now. He's after moving in with his mother for the past 10 weeks and has been eating five times a day and doing nothing but gym-ing. It's a great luxury to have. But it's great to have these guys coming through and the country and provinces needs these guys coming through."

The 30-year-old is part of the Rugby Players Ireland board, who are in pay talks with the IRFU at present. The union and RPI agreed to a pay deferral deal not long after the Coronavirus outbreak was declared a pandemic by the World Health Organisation but that period of time has now passed and fresh talks are ongoing. He commented:

"I'm on the board with Rugby Players, so with regard to anything along those lines, I'm going to kick that to the kerb. I'm in the middle of that, at the moment, so I'm going to stay away from it." 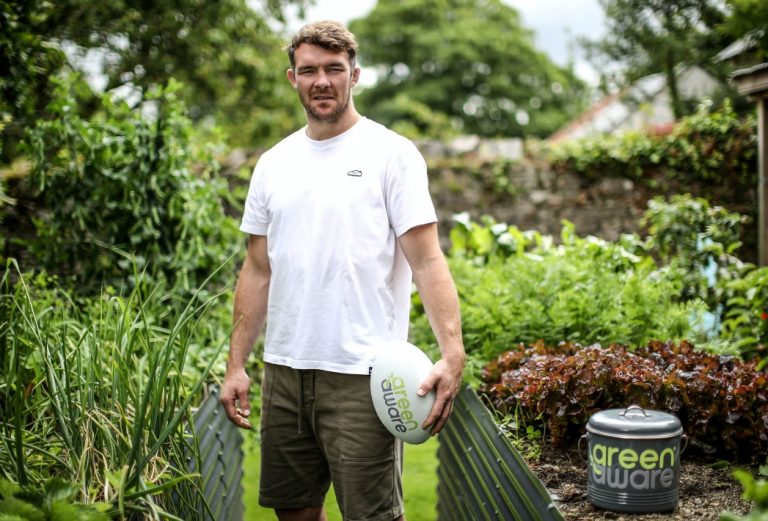 GreenAware ambassador Peter O’Mahony (pictured at his home in Cork) is highlighting how small changes can be made in our day to day lives that make a big impact on the environment as part of the GreenAware #DoBitsHelpLots campaign.

For all the rugby talk, O'Mahony often gets more animated when talking about spending time with his family, over the past three months, or of getting out and about in the garden

"I was lucky that I had the garden over the last few weeks," he says. "Some people don't have that luxury, unfortunately. I had a lot of things to get done and a bit long list to tick off and I'm getting through a good bit of it. First time I've had a break in a long time to have such a window to get things done. It's getting there."

END_OF_DOCUMENT_TOKEN_TO_BE_REPLACED

O'Mahony says Green Aware, who produce a range of compostable bags, fits well with him and that he has a genuine passion for the both gardening and looking after the environment. "I'm really quite passionate about it. With regards to recycling, I've been on plenty of people's backs already about putting things in right bins. I would have given our nutrionist [at Munster] hassle over having the wrong plastic being allowed in the bins. Look, it's all small things but the small things make a big difference."

The Cork native has even gotten his daughter, Indie, into composting out his back garden over the past few months.

"That will be good for her, now. That'll be with her forever, rather than having to learn about it. It'll be second-nature and I think that's really important if we want to make a difference in the future."

The rugby pre-season is ramping up and, as it goes, next week will be harder than this for O'Mahony. All going well on rugby's roadmap back and there will be contact sessions coming from mid July onward.

No matter how much he is relishing rugby, you get the sense that O'Mahony will be really missing that garden.

popular
The SportsJOE 12 o'clock quiz | Day 140
Only a Champions League fanatic would get full marks in this quiz
Rory McIlroy speaks superbly on conscience call that cost him at US PGA
Robin McBryde on training session that sent message to Leinster's international stars
"There's times I do think I probably have let people down but in fairness, I have got good support from back home"
Jonny Hayes and Aberdeen teammates apologise after Covid cluster shutdown
Derrick Lewis will make more money at UFC 230 than his last three fights combined
You may also like
3 weeks ago
We challenge any rugby player to top Jack McGrath's lockdown hobby
3 weeks ago
James McClean opens up on sickening, Covid-related hate mail
4 weeks ago
When the President interrupted a Euro 88 pint between Charlton and Dunphy
4 weeks ago
How an uncultured Englishman conquered Ireland's sporting heart
4 weeks ago
The SportsJOE 12 o'clock quiz | Jack Charlton special (Day 112)
4 weeks ago
Growing up in the shadow of Jack Charlton's Ireland
Next Page