The Munster and Leinster squads were back at it for their first proper days of training in over 100 days, today. Following the good news, on Sunday, that none of the 140 players and staff tested for the Coronavirus were positive, the squads assembled in pods today for tailored work-out programmes and the dreaded Bronco.

The four provinces have been 'approved for return of restricted training' under IRFU protocols and in line with the governments in Ireland and Northern Ireland's phased roadmaps to reopening society. The Guinness PRO14, in line with that, is planning on league games between the Irish provinces to take place at the Aviva Stadium from August 22.

At Leinster's headquarters at the Newstead Buildings, at UCD, squad members were broken into pods and went through gym sessions and on-field work, including those Bronco runs. 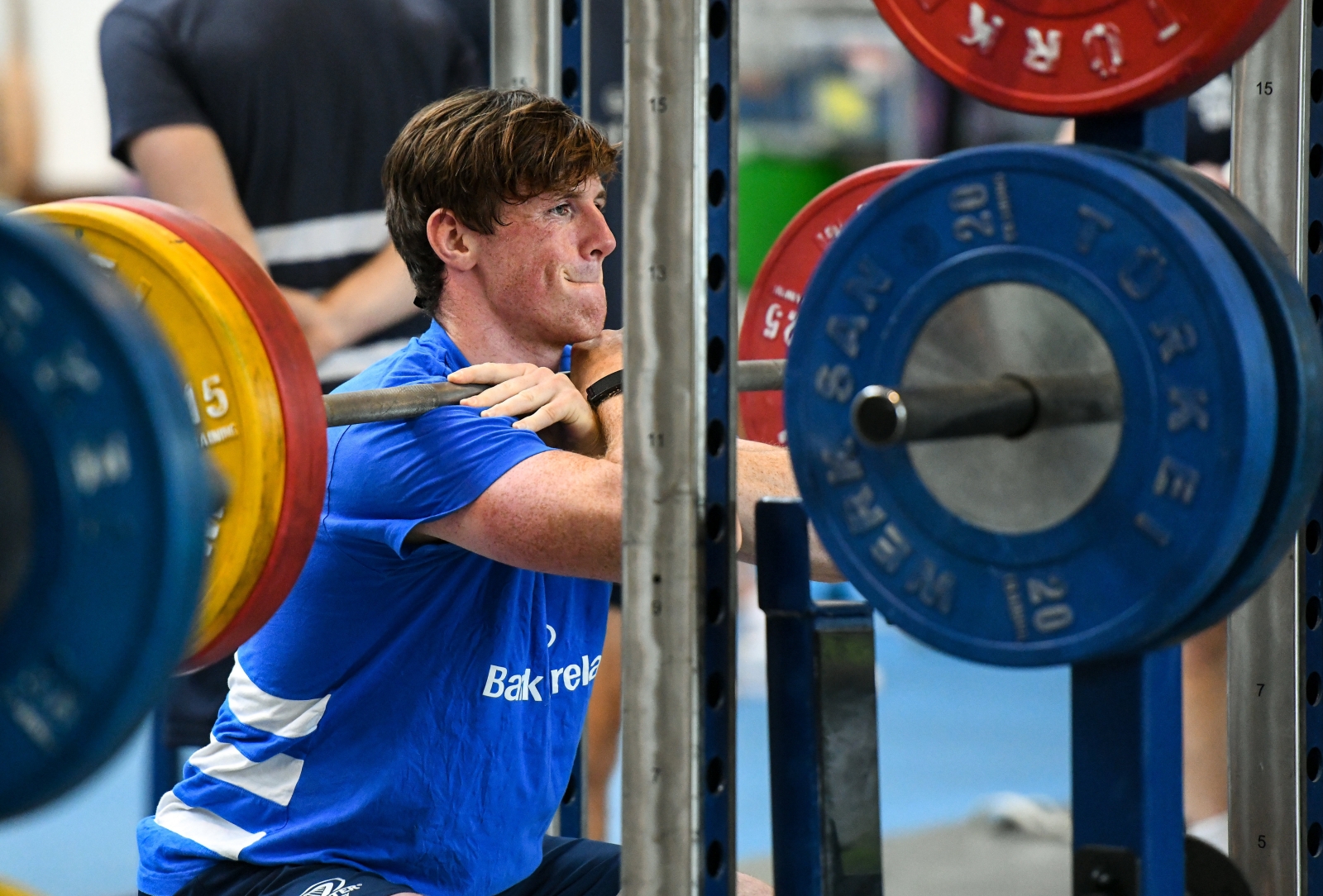 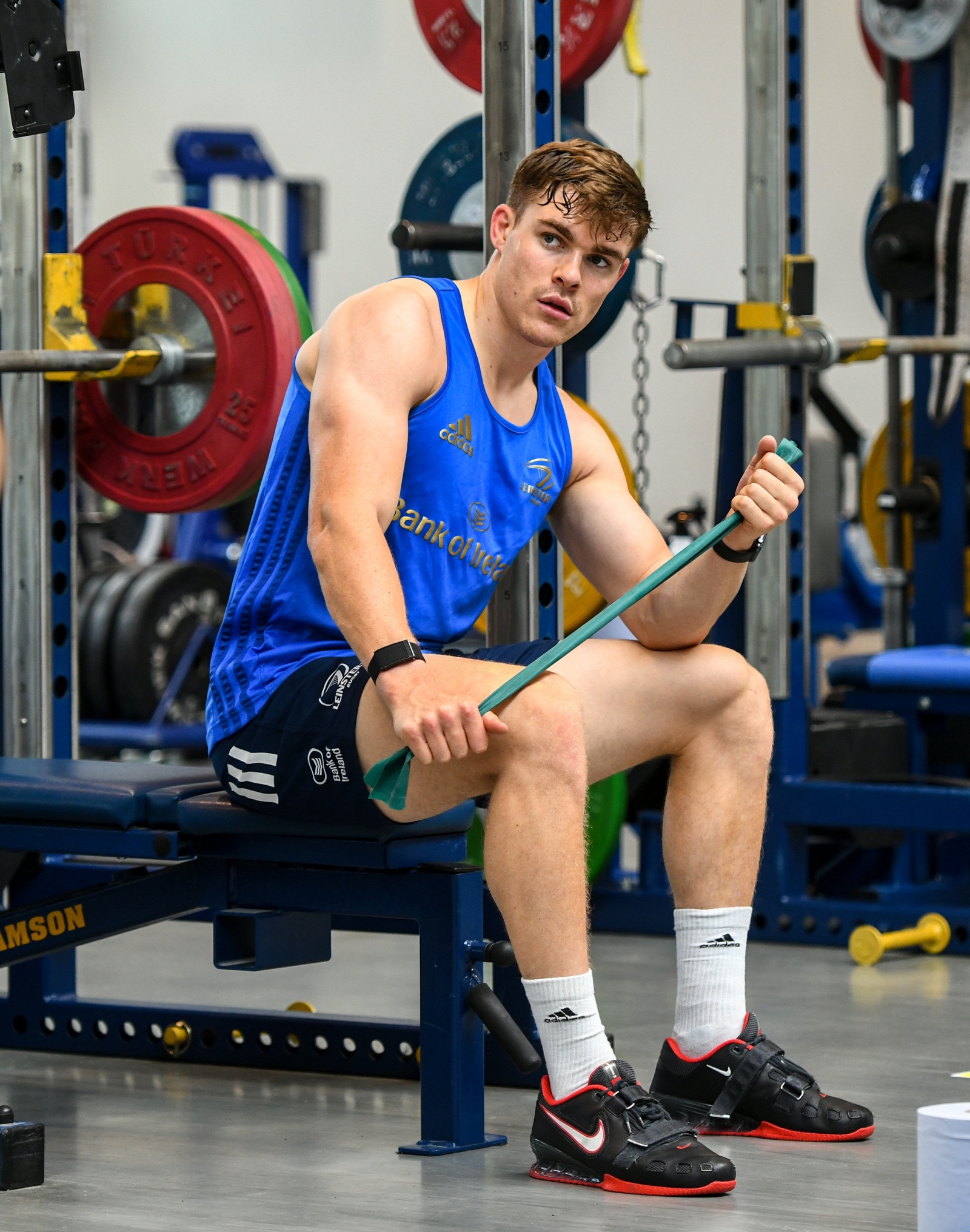 Ryan Baird and Garry Ringrose pictured during a Leinster rugby gym session at UCD in Dublin. (Photo by Marcus Ó Buachalla for Leinster Rugby via Sportsfile)

The Bronco involves players lining up on one end of the pitch and running 20 yards, then back, increasing the run to 40 (and back) then 60 (and back), and doing that five times.

The Ulster and Connacht players do not return until next week with Dave Shanahan from Ulster holding the best Bronco time - during lockdown - from across the provinces. Will Addison says Shanahan ran a 4:20, while Jacob Stockdale told House of Rugby that young centre Stewart Moore pushed him close.

"Stew's been working pretty hard over this lockdown period. He ran a 4:25 bronco, there, which is quick, for a centre especially. I think he was second... Shanners beat him. But he’s right up there in terms of his fitness... he’s really shaping himself up to be a very talented player and there’s no doubt that he’ll get plenty of caps for Ulster."

Back at Leinster, the players had the opportunity to prove all the times they reported as getting during lockdown were grounded in reality. 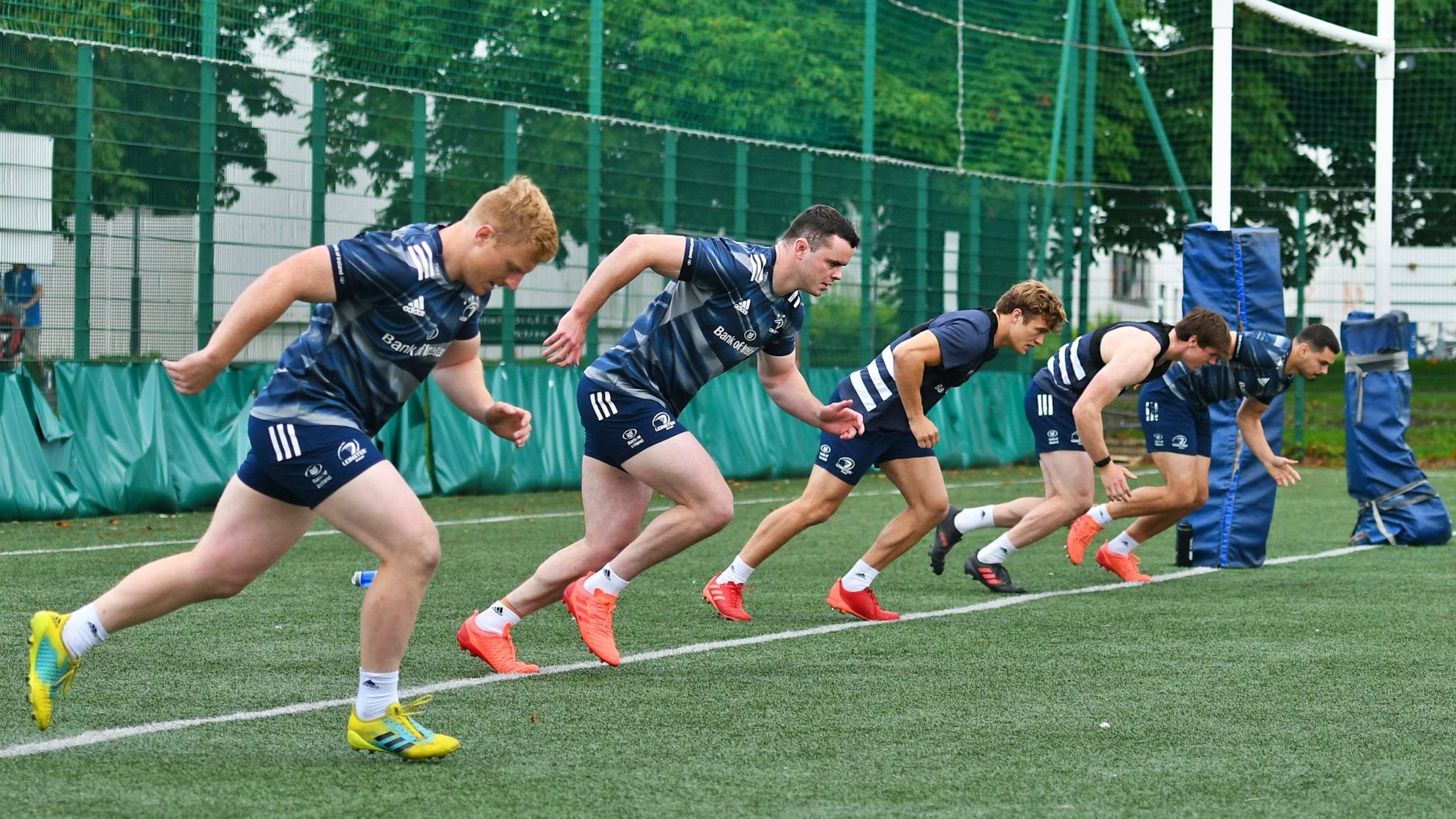 We are hopeful that the provinces will follow the social media steps of New Zealand's Super Rugby sides and release the Bronco times. Before his season resumed, All Blacks star Beauden Barrett timed a Personal Best 4:12 for his Bronco.

Down at Munster's High Performance Centre in Munster, four members of the academy squad - Thomas Ahern, Ben Healy, Jake Flannery and James French - joined up with the senior squad for their pod sessions. CJ Stander and Chris Cloete only arrived back from their time back in their native South Africa and will not be able to train with the squad until they go through their 14 days of self0isolation and Covid-19 testing protocols. A Munster release states:

'Before being permitted entry to the HPC, each player must complete a daily questionnaire at check-in, before having their temperature taken. If, for some reason, the questionnaire raises a concern, this alerts the medical staff to a symptom suggestive of Covid-19 or the player’s temperature is above 37.5°C, a decision will be taken on the next course of action for that player.' 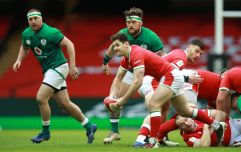 END_OF_DOCUMENT_TOKEN_TO_BE_REPLACED

Munster scrumhalf Craig Casey told SportsJOE, on Sunday, about how he and his teammates were gearing up for the restart.

"We all had allocated [Covid-19 testing] slots on Wednesday. There were certain times across the morning that we all had to come in. We were in there for about 15 minutes with two or three people in there at a time, obviously with social distancing. It was horrendous enough, getting your tonsils hit a bit but good to get it done.

"It had 14 weeks without seeing the lads. It was good to have a chat, even if it was for just a few minutes, and excited to get back in this week.

"Bronco testing and gym testing, now. Straight back into it.

"The last three weeks we were prepping. We also had down-time but a few of us were prepping now, for this. It’s our first time doing the Bronco Test. We used to be doing the 1k test so it’s new to all us, and seems like death. It’s going to be a tough one.

"I put enough pressure on myself going into fitness tests. Knowing that (about Shanahan's time) there’s more pressure now!" 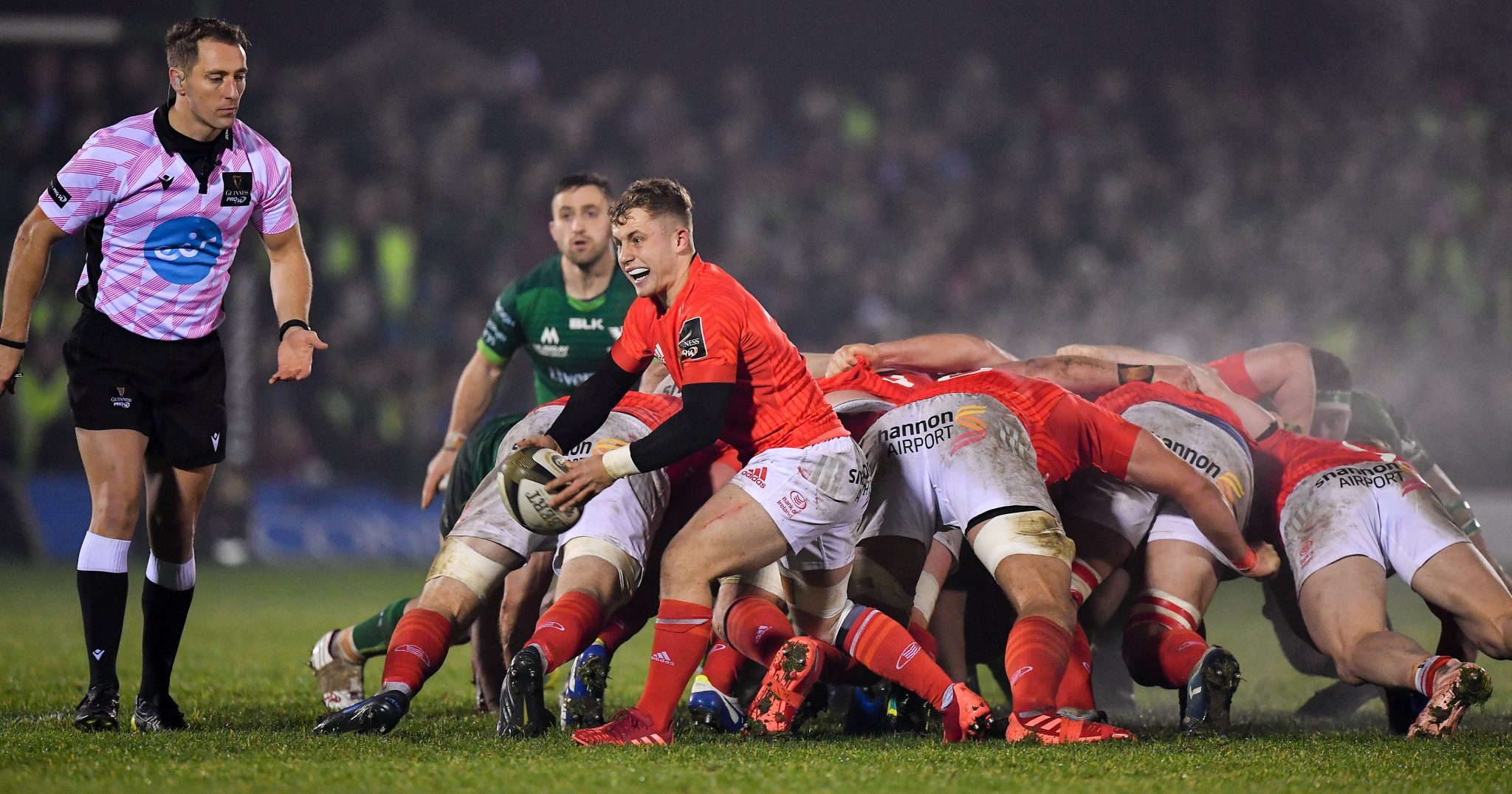 Craig Casey in action against Connacht in December 2019. (Credit: Sportsfile)

Casey notes that Munster had won three games in a row and were 'chasing down Edinburgh' in their Guinness PRO14 conference when the season was halted, due to the pandemic.

"But it’s the same for everyone," he adds. "A chance to get better at a lot of things, over the past 14 weeks. Fitness-wise, we’ve tried to improve on that. It’s a goal of ours in general anyway. Hopefully we can hit the ground running in six or seven weeks time and hit the ground running, to finish what we started."

There was the strange experience, he says, of having to wave off several departing squad members by video conference. "We did the goodbyes on Zoom, which was obviously quite hard for the lads that were leaving," says Casey.

"It was emotional for them and us, obviously, as we got on great with the guys. I’d say it was quite hard to do it over Zoom. They’d been in with the guys every day for the last few years and didn’t get to say goodbye in person. That must be tough. I’d say we’ll be able to meet up with them in person, though, when the full restrictions are done, and have a proper goodbye."

New arrival Damian De Allende is one of three senior players on Munster's 'short-term' injury list, along with Calvin Nash and Keith Earls, but the Springbok's fellow World Cup-winning teammate RG Snyman is good to go.

"I only met RG briefly," Casey says. "I was getting into the car when he was heading in so I said hello through the window. They’ve been over now a while so, restriction-wise, have done the full two weeks of lockdown and quarantine. They’re ready to go as well."

Catch up on all our episodes from the past two seasons and our interviews with the likes of Conrad Smith, Victor Matfield, Simon Zebo, Sean O'Brien, Drew Mitchell, Jean De Villiers, Finn Russell, Mike Brown, Brian O'Driscoll, Tana Umaga and much, much more.


popular
Solskjaer gamble on Harry Maguire backfires in most horrendous way
José Mourinho swaps Conor McGregor a Roma jersey for some whiskey
"I'll go back running the roads now and make sure my body doesn't get lazy"
Alex Ferguson wrote Mickey Harte a letter - ex Tyrone boss reveals in new memoir
Jeff Stelling loses it during Soccer Saturday after Brighton was denied a blatant penalty
"There are clubs in every county that you just know - they like fighting." - Fighting passes on through the generations
"It doesn't look great" - Ulster victory marred by freak Will Addison injury
You may also like
5 hours ago
Caoimhín Kelleher could carve out a career at Liverpool
3 days ago
Full player ratings as feel-good Ireland give Qatar a throttling
4 days ago
Ireland manager Stephen Kenny admits that "60 to 70% of our best players are defenders"
6 days ago
Callum Robinson performance shows Ireland what could have been
6 days ago
Player ratings as Callum Robinson's double wins it for Ireland
1 week ago
Two Irish prospects feature in The Guardian's top 20 Premier League best talents
Next Page