"It's not a high level of danger."

Scarlets captain Jonathan Davies was beside himself after a big refereeing decision at The Sportsground, on Friday night. Paul Boyle saw yellow, and replays suggested he was fortunate to not be sent off.

Andy Friend's side beat Scarlets 36-14, to back up a recent up-turn in fortunes that saw them defeat Munster and push Leinster close, in Galway. Niall Murray and Mack Hansen tries book-ended a fine Connacht display.

END_OF_DOCUMENT_TOKEN_TO_BE_REPLACED

The home side were fortunate, though, when Boyle lifted Tom Price out of a breakdown poach attempt. With Price getting a leg lifted by Denis Buckley, Boyle pulled the Scarlets forward dow, landing him straight on his head.

When Jonker did not move to contradict the statement, the referee made his mind up and it was 10 minutes in the sin-bin for Boyle.

"Not a high level of danger" pic.twitter.com/QmiaytFjhy

Connacht score when down to 14 men

Jonathan Davies challenged the referee on what he felt was a lenient call for Paul Boyle. "It’s not a debate," van der Westhuizen replied.

"He’s very low to the ground, so it’s not a high level of danger. It’s a yellow card."

Over on the BBC, former Ospreys and Wales star James Hook could not understand how the clear-out had not resulted in a red card. He commented:

"I know he wasn’t that far from the ground but you just watch here. He’s lifted him upside down, he’s dropped him on his head like The Undertaker, and regardless how far away from the ground he is, I think that’s dangerous and that’s a red in my opinion."

Connacht prop Jack Augnier got over for a try while Peter Boyle was in the sin-bin and the home side never looked back. The Westerners climbed two places in the standings and are in 13th, after six rounds.

On the latest House of Rugby [LISTEN from 34:20 below], meanwhile, hosts Greg O'Shea, Lindsay Peat and Jason Hennessy discussed Connacht's start to the season and the impact of losing Bundee Aki for so many games. 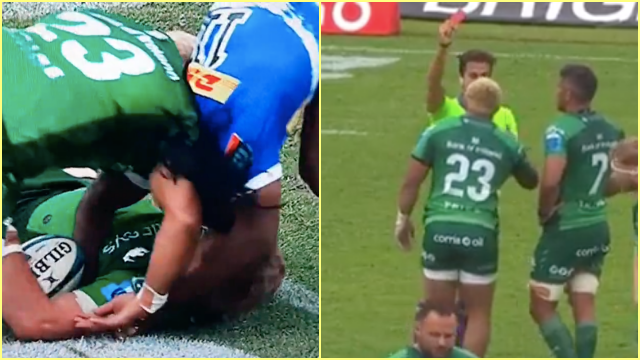 'I lost a bit of respect for Bundee, over that'

Connacht went into the match against Scarlets without Bundee Aki, as the centre continued to serve out his eight-week ban for a red card he received against Stormers for a reckless clear-out on Seabelo Senatla.

Aki had an extra stretch imposed to his ban for his argumentative manner with match officials after he was sent off. "Connacht were unfortunate to lose Aki for so long, after that red card," said Jason Hennessy.

"It was stupid, I thought, and I lost a bit of respect for Bundee, over that incident. He didn't display himself in the best of lights."