One Ireland selection for Scottish game takes everyone by surprise

With injuries in key positions and fierce competition for places, this was always going to be an interesting team announcement.

As expected, Paddy Jackson starts at outhalf in place of the injured Johnny Sexton. He will be partnered by Conor Murray at scrum-half.

END_OF_DOCUMENT_TOKEN_TO_BE_REPLACED

Sean O'Brien has got the jump on Josh van der Flier in the openside role and will pack down with CJ Stander and Jamie Heaslip. The other big calls sees Munster's Keith Earls take up the right wing position and Ian Henderson edge out Donnacha Ryan in the second row battle.

No-one predicted Henderson starting against the Scots and Schmidt showed his complete faith in the Ulster forward by sitting alongside him at the top table announcement at Carton House.

Elsewhere, and excitingly, Robbie Henshaw has been paired with Garry Ringrose in an Irish midfield for the first time. 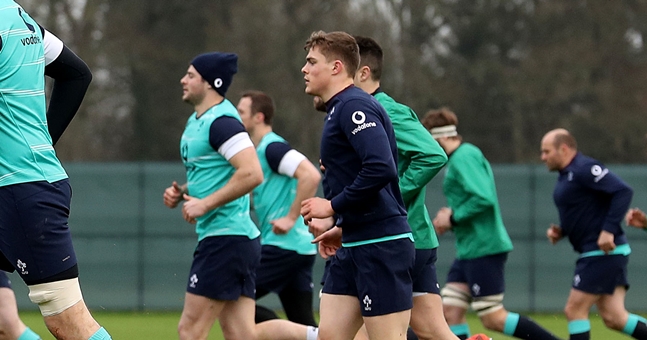 On the bench, Ultan Dillane gets in ahead of Ryan. Munster's Niall Scannell and John Ryan are front row replacements, along with Cian Healy of Leinster.

Kieran Marmion and Ian Keatley are also on the bench and there is a welcome return for Ulster winger Tommy Bowe.

END_OF_DOCUMENT_TOKEN_TO_BE_REPLACED


popular
The FootballJOE Pub Quiz: Week 11
O'Hora and Keegan hammer into each other, both of them only revelling in it
Man United's tactical issues summed up in six shocking screenshots
Liverpool's half-time words in Old Trafford dressing room will please fans greatly
Jesse Lingard seeks to clear up what United fan shouted when he was warming up
Manchester United players 'lose faith' in Solskjaer after Liverpool pasting
Paul Scholes rips into Pogba after disgraceful performance vs Liverpool