How it works between O'Mahony, Zebo and Murray may surprise some

"He's got that mythical Munster element to him."

Peter O'Mahony recent deeds against Argentina and the All Blacks, as well as his early season form for Munster, have garnered a lot of attention on these, and foreign, shores.

The Munster captain has been at his redoubtable best this season and set a high bar with his 10/10 performance in the win over New Zealand.

O'Mahony remains somewhat of an enigma to many, however, and has many of the English press, and players, fascinated to learn more about him. Alex Payne, presenter on Sky Sports and JOE UK's House of Rugby, sought to find out more on the Cork native.

Andrew Trimble, who lined out with O'Mahony for Ireland on numerous occasions, offered some insight to the man [from 15:00 below] in Baz & Andrew's House of Rugby. 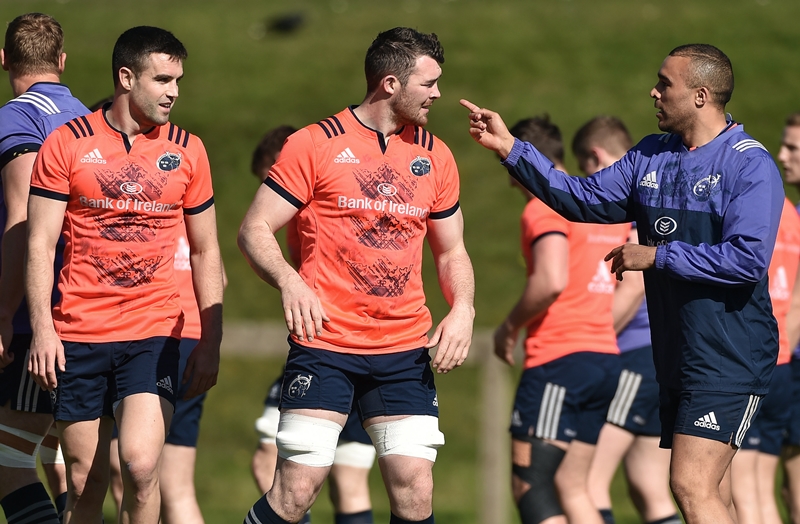 "O'Mahony, Conor Murray and Simon Zebo would hang out quite a lot together," says Trimble.

"And, I must say, Zebo and Murray give him a hard time. He's intense and he's serious, but he's really funny as well and a good lad. It's just, them boys would [tease] him a wee bit.

"I know for that public persona [of his], he doesn't seem like somebody that would get a hard time but he takes it so well. Them boys just know him so well and they know what way he operates.

"But certainly, on the pitch, he's a leader in so many ways... He demands high standards and he knows the game inside out. And there's always a highlight reel of these two or three massive moments and he's right in the middle of them."

In fairness to Murray and Zebo, Rob Kearney also gave O'Mahony a going over, a few years back, down at Carton House ahead of the World Cup.

Asked what the worst chat-up line he ever heard was, Kearney joked that O'Mahony had once approached someone with this - "In Limerick, after the Barbarians game, he goes up to a girl and says, 'Is your name Gilette? Because you're the best a man can get."

O'Mahony wasn't having a bar of it.

"I'll leave you believe... You can take what you want out of that now, lads. I wasn't involved in the Baa Baas game."

popular
The SportsJOE 12 o'clock quiz | Day 146
After a bonkers final frame, a shaken Kyren Wilson makes it to the world final
Leinster star Hugo Keenan has beaten Beauden Barrett's 'Bronco' time
"No doubt he'll say he played shit like he normally does, but I thought it was a good game."
The SportsJOE 12 o'clock quiz | Day 145
QUIZ: Beat the clock to name the Premier League assist kings
300/1 winner makes history at Leopardstown
You may also like
6 days ago
"In this society, it's tough for people to have, and to hide" - John Ryan
1 week ago
"When I signed for Munster, I didn't know Damian was coming as well" - RG Snyman
2 weeks ago
"If you can do something for your fellow man, that says a lot about you"
3 weeks ago
Dates and times confirmed for Irish province's return to rugby
3 weeks ago
"Get jacklers into your team" - How Munster should line up when rugby returns
3 weeks ago
Munster need JJ Hanrahan to wear the crown if they are to end Leinster's reign
Next Page