Why O'Mahony, Beirne and Conan is Ireland's best backrow

As expected, Ireland made sweeping changes to the team for their penultimate Rugby World Cup warm-up game with Wales this weekend.

It's the first time all three players will play alongside each other with Beirne moving to blindside flanker while O'Mahony moves to openside with Jack Conan in at number eight.

END_OF_DOCUMENT_TOKEN_TO_BE_REPLACED

The last time O'Mahony started at seven for Ireland he put on an absolute masterclass at the breakdown. The Munster captain started the last two tests of last year's Australia tour at openside and he was a revelation.

The flanker has shown an excellent ability to pilfer opposition ball throughout his career but the second Test win over Australia was one of the finest performances he's had at the breakdown.

He won three turnovers in the match and forced three penalties in a phenomenal performance over the top of the ball.

END_OF_DOCUMENT_TOKEN_TO_BE_REPLACED

O'Mahony is probably the best jackler in the Irish squad but you could certainly also make a strong argument for Tadhg Beirne in that category.

Beirne set a PRO14 record two seasons ago with 39 turnovers for the Scarlets so if you're going to make that case that stat is probably not a bad place to start.

The beauty of Beirne is that he can cover 4, 5, 6 and 8 and by putting him on the blindside you effectively add another line-out jumper to complement Iain Henderson, James Ryan and O'Mahony, while also combining your two best jacklers in the same backrow.

END_OF_DOCUMENT_TOKEN_TO_BE_REPLACED

Ireland's line-out was a disaster against England as the team won just nine of their 15 throws so Beirne should immediately help in that department but Schmidt also noted after the game how Ireland didn't scavenge for the ball as well as he had hoped, not that they did anything as well as he had hoped at Twickenham.

"We didn't get our set-piece going, we didn't really scavenge as well as we would have liked to. We fell off 34 tackles, 21 of them in the first half."

With O'Mahony and Beirne on either side of the scrum you get good options in the line-out and great scavengers of the ball. Throw in Jack Conan at the back and now Ireland have their best ball runner at number eight.

CJ Stander has been a great player for Ireland over the years but Conan has been better than him for a while now.

After the first six weeks of last season the statistics read like this for the two players: Stander had a better tackle rate but Conan was averaging nearly twice as many metres as him with 3.49 metres per carry in comparison to Stander's 1.91 metres.

His carrying didn't improve in the Six Nations with Stander carrying the ball 43 times for 42 metres and beating just five defenders across the tournament. He achieved gainline success just 16 times.

Billy Vunipola by comparison reeled off 231 metres from 71 carries. Louis Picamoles made 196 metres from 56 carries.

If CJ is not making metres and getting over the gainline then why is he in the team?

Conan deserves his shot to start. He's outperformed Stander for sometime now and on Saturday he will get a chance to show that he deserves to enter the World Cup as Ireland's starting number eight in what looks like a really well balanced backrow. 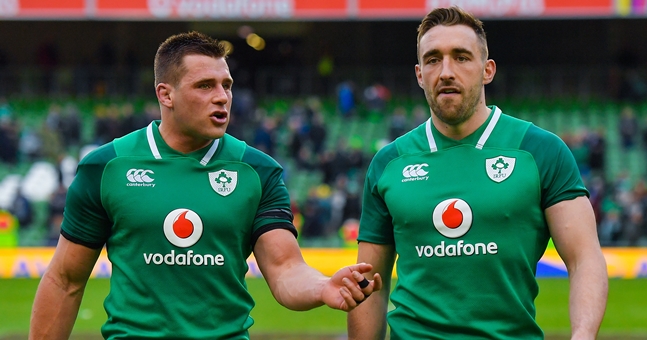 Elsewhere in the starting side for the weekend John Ryan and David Kilcoyne are basically auditioning to show why they should be on the plane instead of Jack McGrath and Andrew Porter.

Iain Henderson gets another shot in the second-row after a mixed game last week. It'll effectively be him or Jean Kleyn that is selected in the final squad so this is a big nod for the new Ulster captain in the fact he's retained his place in the starting side.

Jack Carty is in a similar position after being selected ahead of Ross Byrne who had a difficult day under difficult circumstances at Twickenham last week.

Byrne's chances have not been helped by the fact that Schmidt has selected Garry Ringrose as a back-up 10 for the trip to Cardiff with the Leinster centre having not played in the position since his school days at Blackrock.

Meanwhile Will Addison will also get a shot to start at full-back. His versatility is a big bonus for his World Cup hopes with the former Sale Sharks captain spending most of the season at outside centre for Ulster.

The problem for Schmidt is that he'll most likely take 17 forwards and 14 backs to the World Cup. On that premise, and judging over his selections from the last few years, it's safe to say that these players will be all but certainties to go:

Ireland will basically have to then choose two or three from Farrell, Addison, Larmour and Conway depending on if they decide to take two or three scrum-halves to the tournament.

Schmidt has some tough decisions to make in the coming weeks but the team for Wales got a much needed shakeup.

Now they just have to go and beat a team that has won 14 of their last 15 games at a ground where Ireland got pummeled 25-7 last time out. Exciting team but ominous signs ahead.