Nobody enjoyed Stockdale's try as much as Conor Murray

Ireland have beaten the All Blacks.

For the first time ever, Ireland have beaten the All Blacks on their home turf. This is everything, this is Ireland.

He missed the game with a neck injury but Conor Murray threw every ball with Kieran Marmion, he ran every step with Jacob Stockdale, he pushed every push with Ireland.

He was sitting high in the Aviva Stadium stands and he was surrounded by giddy Irish supporters. The thing is, he was as giddy as every last one of them.

Emanating from Joe Schmidt and his military management, this Ireland team are a united bunch and the bond they've fostered over the last few years is an unbreakable one.

They're teammates, they're brothers and they'd die for one another out on that pitch. Conor Murray wasn't allowed to throw his body on the line on Saturday night but this still means as much to him as if he'd been in the thick of it himself. 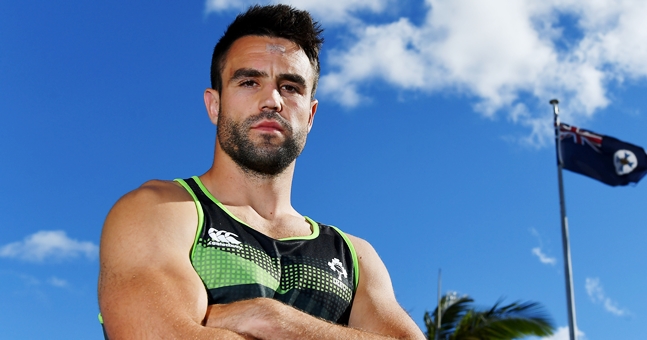 And by God didn't those lads out there in his place stand tall and stand strong.

Kieran Marmion played like Conor Murray would have in a near faultless Landsdowne Road performance at number nine. Tadhg Furlong in front of him was swatting away New Zealand bodies like they were mere flies and Peter O'Mahony, what the hell are we supposed to say about Peter O'Mahony?

The man was so clearly out on his feet after about half an hour but he was still mind-bendingly catapulting his body into freakish positions that it definitely isn't supposed to be in after 73 minutes of this game.

He wasn't done there.

Porter came in, Henderson came in, Luke McGrath and others came in. They all did what O'Mahony had done and what we were so desperate for them to do.

The game-changing moment was this beautiful try from our very own try-scoring machine Jacob Stockdale.

That's what it means.


popular
The SportsJOE 12 o'clock quiz | Day 72
QUIZ: Can you name the Football Italia cult heroes? | Part 2
Justin Gaethje tells Conor McGregor to wait his turn
Only a true nerd will get full marks in our 2016 football quiz
Nigel Owens on how the O'Driscoll and O'Connell captaincy dynamic worked
"Paulie was like Casper the Ghost... he had lost about two stone in the two days"
The SportsJOE 12 o'clock quiz | Day 71
You may also like
3 months ago
"If Murray is playing that first half for England, he's probably Man of the Match"
3 months ago
Ireland lose mental battle, as scars of 2019 rear their head again
3 months ago
Romain Poite "brilliant to deal with" - Sexton
3 months ago
Player ratings as Ireland squeak past Scotland
4 months ago
Two debutants and some shocks as Farrell names Ireland team
7 months ago
Ireland went back to "tried and trusted" - Isa Nacewa
Next Page