Absolutely superb from Ireland Women after a nervy finish.

Ireland avenged their World Cup 2014 semi-final defeat to England by defeating the world champions 11-8 in Ashbourne on Friday.

The victory, secured by a Larissa Muldoon try and two Niamh Briggs penalties, means Ireland are right back in the mix to win the Six Nations title they last [and first] claimed in 2013. 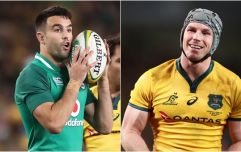 END_OF_DOCUMENT_TOKEN_TO_BE_REPLACED

Briggs, the Irish captain, kicked the winning points in the last minute as Ireland pressured their guests inside their 22. After a short stoppage for cramp treatment, Briggs slotted over the winning penalty.

The match was not over yet. Ireland had a scrum, then maul, as the clock ticked past 83 minutes. They could not retain possession, however, and England had their own scrum before the game eventually came to an end, on 86 minutes, with a knock-on.


popular
Andy Farrell goes for Munster veterans as Ireland team to face New Zealand named
The four stone-cold certainties for All-Stars even as early as this
Eamon McGee just couldn't help himself with Armagh-melee tweet
Kylian Mbappe reportedly wants PSG to sell Neymar
"The economy was one of the big reasons" - Cadogan's move from an electrician to personal training
"He's actually smiling putting the ball over the bar. He should nearly be fainting." - Ryall on Limerick's legacy
Gavin Coombes one of four Irish players to push themselves into Test picture
You may also like
4 years ago
Ian Madigan brilliantly shuts down Twitter user who was complaining about female referees
4 years ago
Sean O'Brien plays very funny prank on shop assistant in Kilkenny
4 years ago
Home and Away's Alf Stewart sends brilliant response to Cork City's league win
4 years ago
Sean O'Brien not impressed with Kearney brothers being referred to as 'famous farm boys'
4 years ago
WATCH: Andy Gray, bless him, got himself a bit muddled while talking about Tony Blair
4 years ago
Limerick manager receives best excuse to miss training we've seen in a long time
Next Page