There were murmurings of this at the time, but confirmation has come through now.

In late 2017, as he looked towards knocking England off their Six Nations perch, Joe Schmidt was contacted by New Zealand Rugby.

NZ Rugby, under Steve Tew, wanted Schmidt to step away from Ireland and join the All Blacks coaching staff.

END_OF_DOCUMENT_TOKEN_TO_BE_REPLACED

The idea was for Schmidt, the Ireland head coach, to come onto the ticket under Steve Hansen and replace his chief assistant Wayne Smith.

Schmidt opted, instead, to sign a contract extension with the IRFU to take him up to the end of the 2019 World Cup. A report in the New Zealand Herald reads:

'NZ Rugby boss Steve Tew confirmed to the Herald that Schmidt turned down an offer to return home and replace Wayne Smith in the All Blacks, choosing instead to re-sign for two years with Ireland...

'It is understood that the role was for Schmidt to work alongside Ian Foster, with the view that one would likely be promoted to head coach whenever Hansen moved on.'

Schmidt may not have been too keen on the idea of working as an assistant for two years on a sort of apprenticeship under Hansen, despite the fact that both men get on well.

The former Leinster coach's instinct to remain on with Ireland proved fruitful for his adopted country. 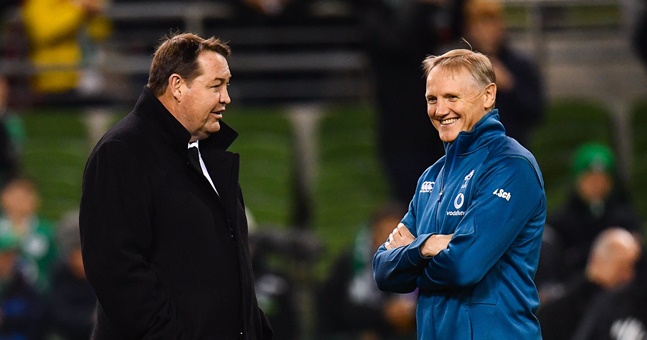 END_OF_DOCUMENT_TOKEN_TO_BE_REPLACED

Ireland won the Six Nations earlier this year, won a Test Series away to Australia and swept the November internationals, which included a second Test win over New Zealand in two years.

Schmidt announced, late last month, that he would be leaving his role with Ireland after the World Cup and that he will 'finish coaching' as he wants to 'prioritise family commitments'.

His statement took many by surprise but he is still heavily tipped to be in the running for the All Blacks job in 2020. He has also been linked to taking the Lions head coach job in 2021.