"He was excellent. And then he went from 9 to 10, which shows his adaptability."

James Lowe may have suggested Ireland would have five Test matches on the New Zealand tour, this summer, but he knows full well that every game in that country is fiercely contested.

The former Waikato Chiefs winger will be hoping to tour with an extended Ireland squad to New Zealand, this summer, and he may have some fresh faces travelling south with him. There has been no official IRFU announcement, yet, on the tour schedule, but it should be two midweek matches to go with the three Tests against the All Blacks.

END_OF_DOCUMENT_TOKEN_TO_BE_REPLACED

With the larger than usual [certainly in the professional era] tour itinerary, Andy Farrell will bring more than 40 players with him to New Zealand. It could be as high as 45 travelling players, and will be a tough proving ground for many players hoping to make an impression ahead of a year that leads into the World Cup in France.

On the latest House of Rugby URC [LISTEN from 1:45 below], hosts Greg O'Shea, Lindsay Peat and Jason Hennessy ran through some potential touring options with former Ireland winger Ali Miller. 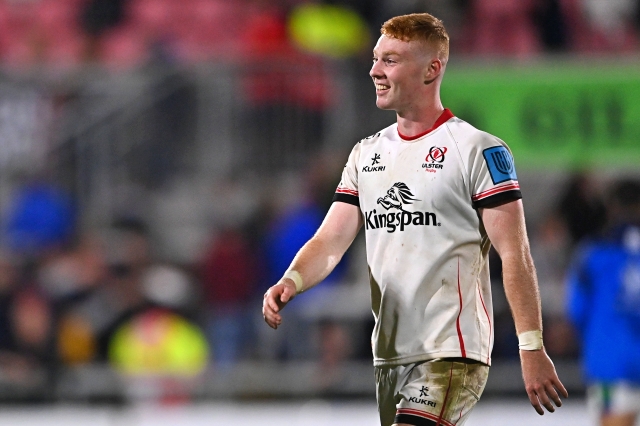 Nathan Doak of Ulster after his side's victory in the United Rugby Championship match against Benetton at Kingspan Stadium. (Photo by Ramsey Cardy/Sportsfile)

END_OF_DOCUMENT_TOKEN_TO_BE_REPLACED

During a round-up of the weekend's United Rugby Championship action, Greg O'Shea identified Ulster scrumhalf Nathan Doak as a player that would be worth a spot on that summer tour to New Zealand.

"He was excellent," Lindsay Peat agreed, "and then he went from 9 to 10, which shows his adaptability. Cooney came on at 9 and he moved over one."

"His kicking was incredible," said O'Shea. "He had one that he landed from over the halfway line. I know he was playing in a part of South Africa where the air was a little thinner, but he was still hitting it well.

"I can see him getting into an Ireland jersey this summer... you have to start rewarding these guys for how well they are playing."

Peat and Ali Miller were both highly impressed with the latest outing of a player, who, like Doak, is uncapped but that has been called in to train with Ireland's senior squad.

"It shows how they are probably one of the best clubs in the world when they have Jimmy O'Brien playing absolutely out of his skin at the moment. The finish for his try, stepping inside Conor Murray, was absolutely sensational.

"They've got James Lowe, who is like an extra back rower, out there. He's got his fend, footwork and his hand-off."

Lowe will definitely be heading on that New Zealand tour. Doak and O'Brien should be too, and it remains to be seen if they are playing midweek matches or in the Test series.

We took a go at selecting a 42-man squad for that New Zealand tour, which you can read here.