Castres vowed to avenge their defeat to Munster last weekend and they just about did it in a filthy, foul match in France. 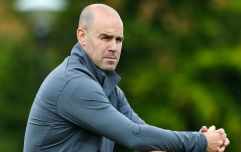 END_OF_DOCUMENT_TOKEN_TO_BE_REPLACED

Joey Carbery kicked four penalties for Munster but the concession of a first half try and an Andrew Conway score getting chalked off ultimately did for them.

The bad blood from Thomond Park, last Sunday, spilled over into the return tie and yellow cards were flashed to both sides. There were no reds, however, and Munster fans were raging as Barnes and his official let some ill deeds slide.

Rory Kockott, who was mouthy throughout, may yet be cited after replays (not followed through on by the TMO) suggested there may have been an eye gouge.

END_OF_DOCUMENT_TOKEN_TO_BE_REPLACED

Castres edged 13-9 ahead after the break before Carbery made it a one-point game.

It then looked as if Andrew Conway had sealed a great away victory but the score was ruled out for a knock-on. Munster fans were livid that two more potential red cards in the lead up to the try, with Peter O'Mahony subjected to a horrendous tip tackle.

And only a yellow for that abominable tackle on POM. Le sigh.

Off the ball, no arms and tip tackle. Yellow card? Wayne is really letting himself down here.

Castres held on in the final stages and claimed a win that just about keeps their Champions Cup hopes alive. Johann van Graan's side, at least, got a losing bonus point.

Munster must now win their final two games to have a chance of making the knock-out stages.