'One of which is suspected to be the new variant Omicron.'

Munster and Cardiff have been forced to change travel plans again and remain in Cape Town after three positive Covid-19 cases were confirmed across the two squads.

Munster, Cardiff, Zebre and Scarlets were all in South Africa were rounds six and seven of the United Rugby Championship, over the next two weekends. Those games were cancelled, though, after a new strain of Covid cases, known as Omicron, was identified in South Africa.

END_OF_DOCUMENT_TOKEN_TO_BE_REPLACED

Both rounds of matches were scratched and, although travel bans have been imposed on a number of African countries, the mission became about getting clearance to get the squads, and support staff, home.

Munster were able to head from Pretoria to Cape Town on Saturday and the plan had been to charter a flight to Dublin from that city for themselves and the three other touring sides. Only Scarlets and Zebre are heading to Dublin, though, after Munster and Cardiff returned positive cases. A statement from Munster, today, reads:

'This morning, Munster Rugby were making plans to join their fellow URC sides in departing Cape Town for Dublin by charter.

'After arriving at their hotel in Cape Town late last night the squad underwent a round of PCR testing ahead of today’s possible departure. The returning results have identified one positive case.

'In taking all precautions and prioritising the health and wellbeing of everyone Munster Rugby will not travel today and will return to their hotel for an isolation period as a matter of priority. The province will await further guidance from the health authorities.' 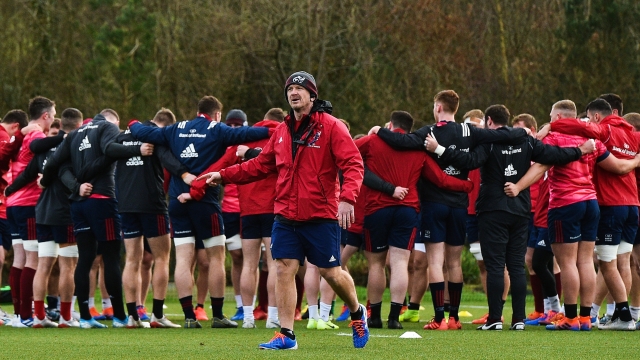 END_OF_DOCUMENT_TOKEN_TO_BE_REPLACED

The situation could be murkier for Cardiff Blues after they returned two positive cases, one of which had the Omicron strain present.

'Cardiff Rugby have been unable to depart South Africa following two positive cases of Covid-19, one of which is suspected to be the new variant Omicron," the Welsh club's statement read.

'The travelling party had hoped to depart Cape Town this afternoon after a charter plane was secured, however PCR tests undertaken last night have returned two positive results.

'As a consequence of one of these results suspected of being Omicron, the entire travelling party have returned to their hotel to isolate.

'Cardiff Rugby continue to work with the South African Rugby Union, the Welsh Rugby Union and public health authorities both at home and abroad to decide the next course of action. The club are also continuing to work with all relevant authorities to secure the travelling party’s return to Wales when safe and appropriate.'

Munster may now have to wait until more tests are carried out on Monday to see if there are more cases in their squad. They could be forced to carry out their period of quarantine in South Africa, rather than travelling home to do so.


popular
Rangers legend says he and Roy Keane didn't speak during Man United spell
The coolest customer in hand-ball hoping to carry on the family tradition for Kilkenny
Oli McBurnie: Police investigating video of alleged 'stamp' on Nottingham Forest fan
Josh van der Flier and Sam Monaghan win big at Irish rugby awards
Rhodri Giggs accuses Gary Neville of hypocrisy over Salford sacking
"I think there are only five Kilkenny players who are guaranteed to start on any given day" - Cody's motivational methods
"County football isn't for everyone" - Down captain Barry O'Hagan hits back at criticism
You may also like
1 day ago
Owen Farrell, Manu Tuilagi and 10 uncapped players in latest England squad
3 days ago
French media rave about Caelan Doris and 'Playstation rugby' from Leinster
3 days ago
Ronan O'Gara's La Rochelle stand in Leinster's way after semi-final grind
3 days ago
Somehow, we all may have underestimated Johnny Sexton
1 week ago
"He could be one of the world's best" - Sean O'Brien on rugby's latest speed demon
1 week ago
Picking the best sporting moment of the past decade is not simple
Next Page