"Anyone less belligerent would have backed down..."

"Now, if he wasn't Martin Johnson, and there's loads of words you could use to describe him!"

It's one of the most recognisable moments in Irish sport in the last twenty years, infamous and iconic in equal measure. The stakes couldn't have been higher; this was a cup final within a league tournament. Ireland hosted England at Lansdowne Road in the final game of the 2003 Six Nations, the winner took the Grand Slam. Ireland were looking for their first clean sweep in 55 years. England had been denied it for three years in a row by just one defeat; twice on the final day, including once by the same opposition in the same venue just two years previously.

No one was going to give an inch. Literally. 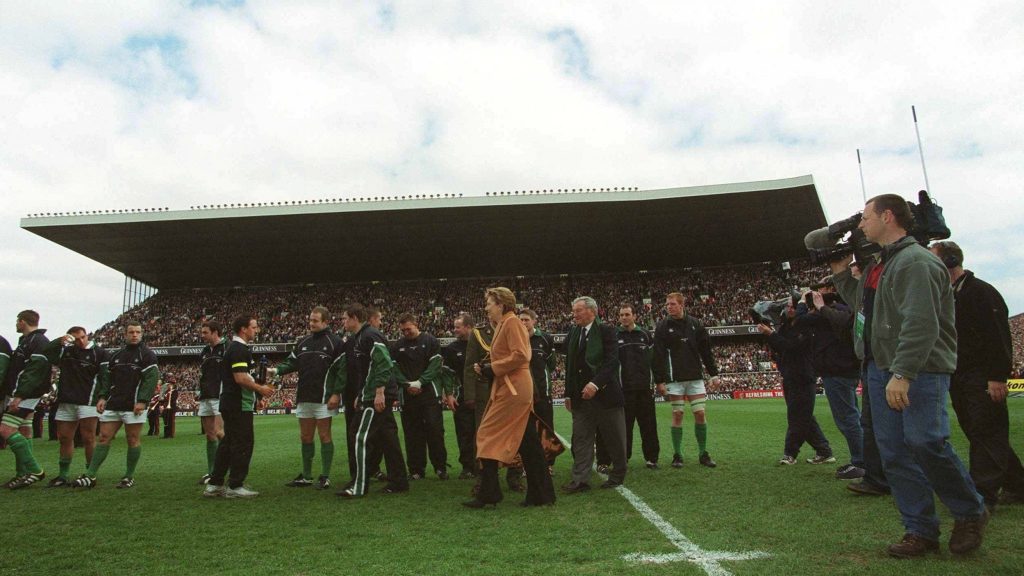 END_OF_DOCUMENT_TOKEN_TO_BE_REPLACED

Ireland were very much on an upward curve, particularly since the expansion of the tournament in the 2000 season. Two third place finishes and a runners-up spot was their record in the previous three tournaments, and many felt this was the chance to fianlly reach the holy grail of the Grand Slam. Speaking to SportsJOE, starting hooker that day Shane Byrne recalled how they ran aground against a side that would go on to win the World Cup that year;

"We had been doing a lot of fantastic things in the early noughties, and a lot of great achievements, and it was starting to culminate at that point. But we came across an absolute machine of a team. There was the incident with the anthems at the start... that encapsulates the strength of that England team, and the Martin Johnson era. His influence there, anyone less belligerent would have backed down and just gone over to the side they were meant to be on, because it was just an innocent mistake by one of the stewards. But you have to look back on it and go... it was great play. Now, you'd hate him for it, but it was good work by him because it really galvanised that team."

The incident barely requires any reminding. Johnson placed his English team on the side of the red carpet traditionally reserved for the home side. When the mistake was pointed out to the English captain, he refused to budge. But Byrne says Johnson didn't have much of a choice;

"There was a load of, you know, kerfuffle about it and there was a lot of people saying 'oh it was a disgrace', but it wasn't really, you know what I mean? It was just a very, very strong domineering personality, which he was, and just taking control of the situation that they shouldn't have been in. Now, if he wasn't Martin Johnson, and there's loads of words you could use to describe him! But, the fact that he made the stand worked and they all just stood by him, he's not gonna move, and that was them. That encapsulates what it was. Yeah it could have backfired on them massively, but the thing you've got to remember is they were a brilliant team, an absolutely brilliant team right the way across... But that incident, yeah look it was controversial enough, but from a rugby point of view you know exactly what he was doing, you know exactly why he did it. And he was in a situation that the minute it went on 10 seconds longer than it should have, he couldn't back down." 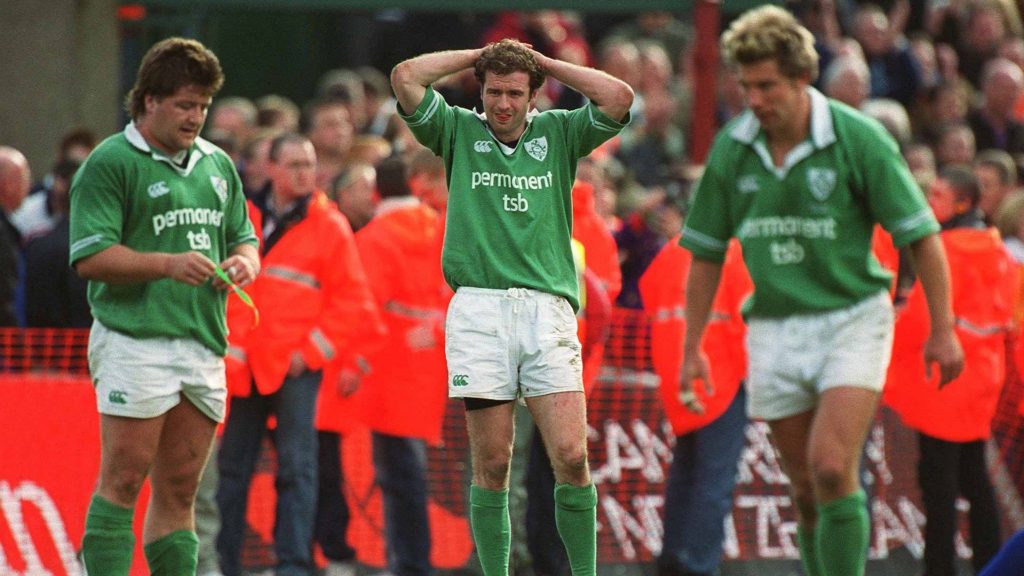 Ireland were also not for moving. When the side came out, led by captain Brian O'Driscoll, they also refused to take the 'away' side, and instead lined up down from their English counterparts. The result was that Irish President Mary McAleese was forced to walk off the red carpet in order to meet the Irish team.

"Well that was Brian (O'Driscoll) because we went out obviously expecting to go there (the right-hand side), there was the kerfuffle going on, and we just went out a little bit. In fairness to Brian, we always go on the right, that's where we're going. And Mary McAleese didn't mind. She was full of... giving us plenty of words of encouragement as she was going down our line!"

Can he recall exactly what was said?

"I can't remember, no. There was a group of us, and she was... 'just go out and do the job', there was plenty of that. She knew what was going on, it was all mind games and things like that."

The game ended, as we all know, in a Grand-Slam winning 42-6 annihilation of Ireland. While they would go on to beat England the following year and win the Triple Crown, it would take another six years for Ireland to register that elusive Grand Slam, before righting the wrongs of 2003 finally in Twickenham in 2018 when it was Ireland who completed a clean sweep of their own on England's home turf. With Ireland looking to secure a Triple Crown on Saturday, and England seeking a return to the form that almost landed them a second Webb Ellis trophy just under four months ago, the stage is set for yet another instalment of one of the most intriguing games in world rugby. 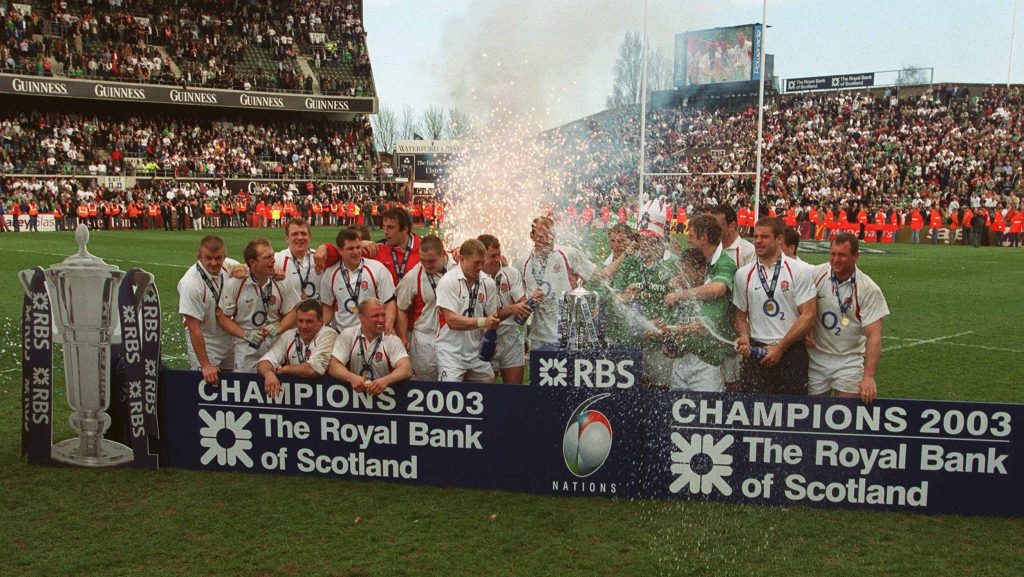 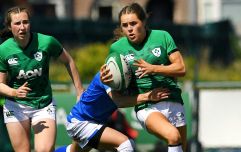 END_OF_DOCUMENT_TOKEN_TO_BE_REPLACED


popular
"I remember someone saying, 'This guy's the best of the lot of them. Just wait for him'" - Brian O'Driscoll
Emotional Robbie Savage introduces son Charlie's Man Utd debut while on commentary duty
Treaty take home record-breaking haul of All-Stars but unluckiest absentee is a Limerick man
"I trained with a guy that was born in 2004 the other day. We reckoned Earlsie could be his father!" - Peter O'Mahony
Nigel Owens on most annoying players to referee (three of them are Irish)
The story of the GAA's greatest ever minor
Six All Blacks but no Ireland players in world's top 20 list headed by Antoine Dupont
You may also like
7 months ago
Cliodhna Moloney's commendable attitude after Ireland's bumpy landing
7 months ago
"Dorothy Wall, hands down... she's a wrecking ball!"
7 months ago
Full player ratings as Ireland dismantle Wales in Six Nations opener
8 months ago
Lawrence Dallaglio's Lions XV sees five Irish players make the cut
8 months ago
Stephen Jones' Lions squad has no place for Sexton or Stander
8 months ago
Five Irish players make Ian McGeechan's best Lions XV of Six Nations
Next Page