"In the back of my head I am thinking, 'This is the pearl of English rugby and you don’t want to make him angry!'"

Rohan Janse van Rensburg picked an odd time to tell his teammate, Manu Tuilagi that he was carrying too much weight, but the feedback was coming from the right place.

Sale had just lost their Premiership semi-final against Exeter Chiefs and a promising season was ending with that gnawing sense of disappointment. Of what could have been.

END_OF_DOCUMENT_TOKEN_TO_BE_REPLACED

As van Rensburg sat beside Tuilagi in a disconsolate dressing room, he took the plunge and told Tuilagi that the pair of them could do with trimming down. The sense, van Rensburg told The Times, was had he being doing absolutely everything he could to get more out of his body.

The South African back and Tuilagi are both called 'The Bruise Brothers' by the teammates and are known for their full-throttle playing style, but injuries have hampered both of their careers. Tuilagi has played 43 times for England but is 30 now, and would be up at 80+ Test outings were it nt for a bad string of injuries. 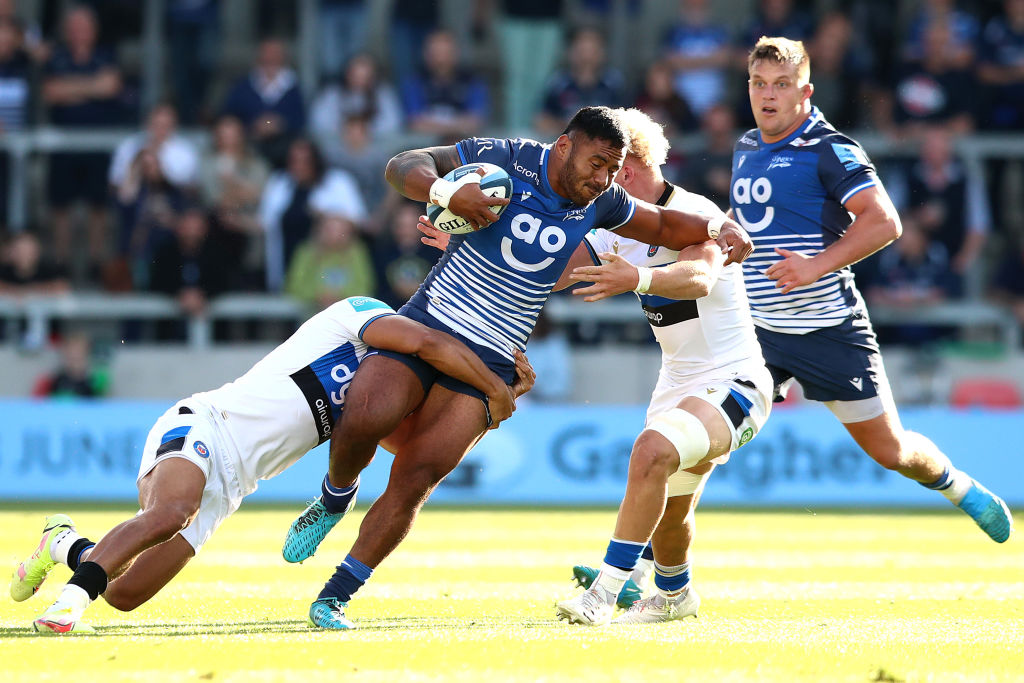 Manu Tuilagi of Sale Sharks is tackled by Jonathan Joseph and Miles Reid of Bath. (Photo by Jan Kruger/Getty Images for Sale Sharks)

END_OF_DOCUMENT_TOKEN_TO_BE_REPLACED

Van Rensburg says he made the admission to Tuilagi about their weight as they are best friends at the club. The England star took the comments on-board and both embraced the mission of coming back stronger and leaner for 2021/22.

Heading into the summer, Tuilagi tipped the scales at 114kg (17-stone 9lbs) and Van Rensburg about 112kg (17-stone 6lbs). Both have lost six kgs [10lbs] and should drop a stone in weight once they are two or three games into the club season.

Van Rensburg told Chris Jones says the main thrust has been 'changing eating habits and cutting out a few things that would be normal'. He commented:

"Red meat is one thing and the first time I introduced Manu to two South African meat favourites, biltong and droewors, he picked up three or four kgs in a few days. We both realised that if we eat too much red meat we can pick up weight in days that it takes others months to do.

"It is crazy and so red meat had to be cut and I went on to chicken with Manu on fish and a bit of white meat and cutting down sugars to trim down. My wife found it funny that we went from biltong, chops and steaks to this minimal food lifestyle."

END_OF_DOCUMENT_TOKEN_TO_BE_REPLACED

Such has been the transformation of both men, the South African says, that they have added another centre, Sam Hill, to their gym group. All three are pushing each other hard, but seeing and feeling the results.

Tuilagi certainly looked, and played, the part against Bath in Saturday's Premiership opener. He made 13 carries for 22 metres, unfurled a couple of nice offloads, hit rucks with ferocity and stuck four tackles in defence. Sale beat Bath 20-19 and will be hoping to go two steps further in this season's Premiership.

"We always had that desire but maybe our bodies didn’t allow us to do that kind of repetition for 80 minutes," he said. "We are going to have to look after our bodies to be able to go and go again."

You can check out that full interview with van Rensburg here.


popular
World Cup 2022 Day 10: All the major action and talking points
Thibaut Courtois warns teammates after leaks emerge from Belgium camp
"I can absolutely say that I have never enjoyed a job more" - McKaigue revelling in new role as Slaughtneil GPO
Iran demand action by FIFA after USA team change flag on social media
Cristiano Ronaldo text Piers Morgan immediately after Uruguay win to claim he scored first goal
World Cup 2022 Day Nine: All the major action and talking points
"I have equal love for football and hurling" - Sheehy set for two Leinster finals in two hours
You may also like
1 week ago
"Two Irish players are best in the world" - Rugby reacts to big Josh van der Flier and Terry Kennedy awards
1 week ago
Two baffling omissions as four Ireland stars make World Rugby 'Dream Team' of the Year
1 week ago
Josh van der Flier claims World Rugby Player of the Year at Monaco ceremony
1 week ago
"Highlight of my Ireland career" - Behind the scenes as Jack Crowley and Ross Byrne covered for a legend
1 week ago
Bundee Aki reminded us all of his best qualities, on a night Ireland couldn't do without him
1 week ago
Peter O'Mahony delivered some fitting Jack Crowley comments after surprise Test start
Next Page