"I’ll play wherever you need me!"

Following Ireland's 29-7 victory over Wales, Johnny Sexton blew out his cheeks as he reflected on how quickly Mack Hansen had settled into the squad.

The Connacht winger, who arrived over from Australia last summer, was called into Andy Farrell's squad for the Six Nations, after getting a brief taste for it late last year. When James Lowe picked up an injury, missing the opening rounds, it was expected that Jordan Larmour or Robert Baloucoune would take the 11 jersey.

END_OF_DOCUMENT_TOKEN_TO_BE_REPLACED

Farrell went with Hansen and the winger repaid him with a man of the match performance that saw him carry for over 100 metres, make three clean breaks and tee up Bundee Aki for the opening try. Following the game, Sexton compared him to Lowe - his Leinster teammate - and spoke of his laconic nature.

"I was really impressed," said Sexton. "He’s a good guy, which is the most important thing… his performance speaks for itself… sometimes guys like him don’t shine in training as it is not full contact, but he really shone; he’s made for international rugby.

"He can probably play anywhere - I was talking to him about where he prefers to play and he said, 'I’ll play wherever you need me!' He can also play 10, so has that experience of playing across the backline." 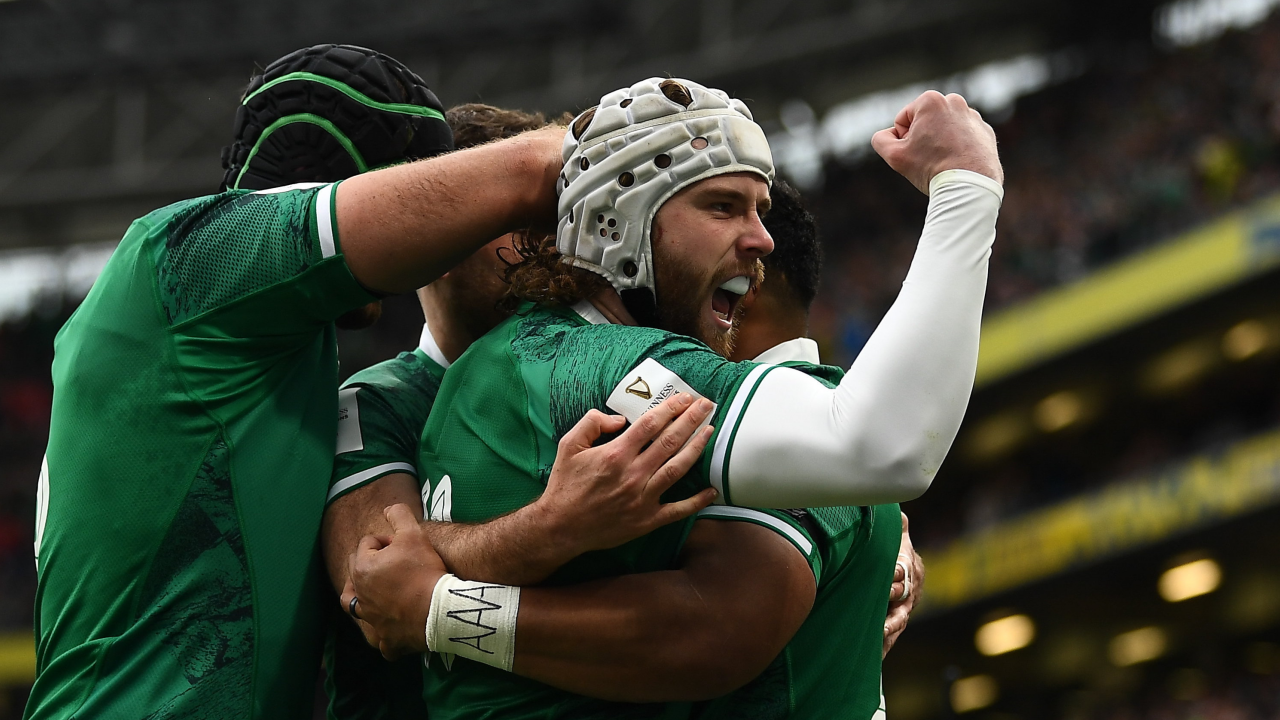 Mack Hansen on his call-up, debut and initiation song

Sitting proudly in his Ireland debut cap, Mack Hansen reflected on a whirlwind couple of weeks that saw him called up and fishing out the sun screen from his luggage for the training trip to Portugal.

"In the morning, Bundee [Aki] told me that I was in the squad, but I hadn't heard anything, seen an email or anything.

"I didn't know if he was taking the piss, or not. It was a bit hard to believe him, during the day. Then, when the sheet came up and it had my name on it, I was stoked. I was absolutely stoked to be involved with this team. It was great."

END_OF_DOCUMENT_TOKEN_TO_BE_REPLACED

Hansen said it was always his intention of playing Test rugby when he made the decision to set off from Australia to play for Connacht. His mother is from Cork and a heap of his relatives were watching the game, today, down in the Rebel county, as well as another clatter back home.

"I consider this place home now," he declared, "and I think I will for a long time. To get my first cap for Ireland is something I'll remember for ever and ever."

Mack Hansen rocking his @IrishRugby cap after one hell of a debut performance pic.twitter.com/EpUIqtv1bN

END_OF_DOCUMENT_TOKEN_TO_BE_REPLACED

On more than one occasion in his post-match briefing, Hansen mentioned Aki, his Connacht and now Ireland teammate.

"Bundee has been amazing. He's another guy that got a lot of videos sent over, for me, from home. He's done everything to make this week as special as possible for me. All the Connacht lads are stoked for me, and have put in a huge effort.

"Getting presented my first jersey by Bundee and Jack Carty was very special for me."

Hansen had not yet sang his initiation song in front of the squad. "What do you reckon?" he asked as he admitted he had not settled on a tune.


popular
Get him a tuxedo, give him the All-Star and for crying out loud, someone bring that man out to America
Southampton pay tribute as Shane Long leaves the club after eight years
Fans react to Tottenham Hotspur's 'brilliant tease' for Richarlison signing
Tiernan Kelly and three other players hit with ban following tunnel brawl
Mohamed Salah signs new long-term contract with Liverpool
Former England Under-21 captain open to playing for Ireland
The four stone-cold certainties for All-Stars even as early as this
You may also like
1 day ago
Your guide to an incredible weekend of sport and how to stream it all
2 days ago
Gavin Coombes one of four Irish players to push themselves into Test picture
2 days ago
Bundee Aki understandably emotional, as Ireland pay moving tribute to late Sean Wainui
2 days ago
Full Ireland player ratings after Maori All Blacks teach us an early lesson
3 days ago
"We could lose all five games" - Darren Cave with a rare take on Ireland's chances
3 days ago
Mike Lowry and Peter O'Mahony in First Test contention as Ireland shuffle deck
Next Page