Former Ireland internationals Luke Fitzgerald and Peter Stringer have both said that they would like to see Munster lock Tadhg Beirne recalled for Ireland's match with New Zealand next weekend.

Beirne scored two tries for Ireland against Italy in Chicago last weekend but was subsequently dropped for the visit of Argentina on Saturday.

Ireland head coach Joe Schmidt said that his omission this week stemmed from a desire to manage his minutes but both Stringer and Fitzgerald feel that he could be a difference maker against an All Blacks side that just edged England at Twickenham earlier on Saturday.

"You look at the likes of [Dan] Leavy coming off the bench and doing really, really well but for me I'd like to see Tadhg Beirne inside the matchday 23," Stringer said on Channel 4's post-match show.

"The guy has performed and produced the goods for Munster and for Ireland whenever he has been called in the last couple of weeks. I'd love to see him in there." 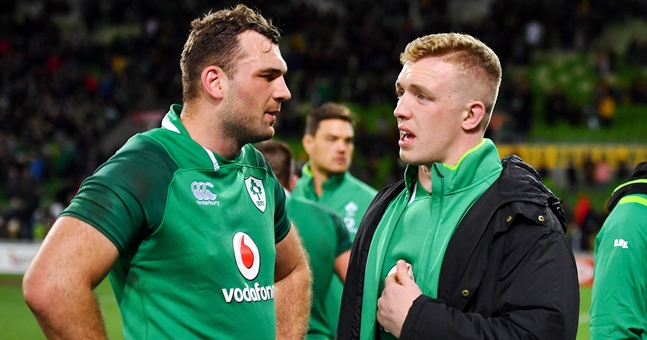 Fitzgerald added that Beirne's ability at the breakdown could be a big asset against a New Zealand team that controls the ball well and that his workrate could add to the Irish pack against the two-time defending world champions.

"With the game against New Zealand it's going to be high pace. You want someone that can get you a turnover, who is good in attack as well. I thought the work he got in against a poor Italy team, he got through loads of work as well, he'd be a great addition to this team as well. I just don't know where you'd fit him in."

Meanwhile former Ireland captain Brian O'Driscoll said that Beirne would still need to show his worth on an international level but that he's been impressed by what he's seen so far from the former Scarlet.

"In the second row I want to see more of Tadhg Beirne internationally because we know what he can do provincially and at European level but the more games we get to see we’ll get to understand whether he is able to convert that European form to international and if he can push Iain Henderson," said O'Driscoll at the launch of the Guinness Series.


popular
From Canada to Carlow in the name of hurling: Nicolas Redmond's journey to the Fitzgibbon Cup
Kerry's captain selection for 2022 sums up the problem with their outdated system
"It must be difficult to say no, having won a game and heading back together"
Eddie Jones shares great tale on hour-long chat with 'inspirational' Roy Keane
Chelsea forced to change Stamford Bridge changing room after Liverpool complaint
Jesse Lingard 'angered by lack of respect' shown by Man United
Outrage after Sadio Mane allowed to play on for 10 minutes after being knocked out
You may also like
21 hours ago
"It's not a stepping stone any more" - Connacht pride in Test-ready stars
1 day ago
"I had a point to prove" - Conor Oliver on choosing Connacht over Leicester Tigers
5 days ago
"I saw a skinny boy from Ireland, standing in a big goal" - Jurgen Klopp praises Caoimhín Kelleher's development as a goalkeeper
6 days ago
Predicting Ireland's starting XV for Wales after Andy Farrell squad announcement
6 days ago
Jamie Heaslip delivers Jack Carty reality check, hours before Ireland call-up
6 days ago
Several exciting backs included in Ireland squad for 2022 Six Nations
Next Page