Leinster head coach Leo Cullen indicated that Ireland centre Robbie Henshaw could return to play for the province before the end of the season.

Henshaw has not played since injuring his shoulder in Ireland's Six Nations win over Italy last month but said that he was optimistic about returning for Leinster before the end of the season.

Cullen said that they would have to wait and see how Henshaw's recovery progresses while also revealing that flanker Sean O'Brien is edging closer to a return after injuring his shoulder upon his return from a hip injury against the Scarlets earlier this month.

"Robbie is obviously going to miss the next couple of weeks and whether or not he comes back towards the end of the season we'll wait and see," Cullen told Leinster Rugby TV.

END_OF_DOCUMENT_TOKEN_TO_BE_REPLACED

"Sean took a knock on his shoulder in the Scarlets game but he's responded pretty well to treatment, so this week would have probably been a bit too soon, but he's not a million miles away so we'll see how he progresses."

O'Brien said that his hip is back to full strength and that he needed to address the issue earlier in the season as he felt it was impacting on his performance. 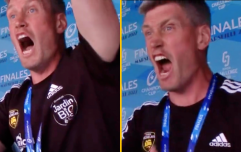 END_OF_DOCUMENT_TOKEN_TO_BE_REPLACED

“I’ve had a frustrating couple of months now with my hip. It was just a bit of wear and tear. I kind of had an issue for the last two games and was struggling every week to train.

“It’s just one of those things that I was just getting impinged the whole time, so it had to be done.

“I had a hip scope, got the joint cleaned out, which helped an awful lot. Basically, they go in, take out all those little bits and pieces that are floating about, and close you back up.

“It was only meant to be a couple of weeks, but I was so weak around the joint that it took until now to get it strong enough. Thankfully, now it’s fine. I’m feeling good now.”


popular
QUIZ: How many of the 10 most successful football counties can you name without making a mistake?
Conor McGregor and Floyd Mayweather 'in talks' about a rematch
Éamonn Fitzmaurice explains Aidan O'Shea's best position and how it can be used against Kerry
Matt Le Tissier says he asked Sky Sports why they never sacked Jamie Carragher
Patrick Vieira claims he was 'much better' than Roy Keane in new interview
Steve McClaren issues warning to Man United players
Two All-Ireland quarter-finals to be streamed exclusively live on NOW
You may also like
1 month ago
Steve Borthwick on the Leicester Tigers 'show of hands' before Leinster clash
1 month ago
"Leinster have got to come to our backyard. It’s our gaff" - Ellis Genge
3 months ago
Leinster GAA appoints 30 new full time coaches to help rest of province compete with Dublin
3 months ago
Dublin likely to play Leinster semi-final outside of Croke Park for the first time in 26 years
4 months ago
"He's available for selection" - Mark Vaughan is still playing his part in making Kilmacud Crokes history
4 months ago
Craig Dias on club All-Ireland run, winning Leinster, and making his second debut for Dublin a decade after his first
Next Page