In fairness to the Irish outhalf, his penalty was from 56-metres. With seven minutes remaining, Sexton's effort fell short.

Three minutes later and Ford bisected the posts with an altogether simpler effort. Bath had the 19-16 win and Leinster - 0 from 2 pool games - are hoping for miracles.

END_OF_DOCUMENT_TOKEN_TO_BE_REPLACED

Leinster's scrum was targeted from the get-go by the hosts at it gave them penalties and free kicks for touch all day.

Leo Cullen's men got off to a bright start and took the lead through a Johnny Sexton penalty before Geore Ford levelled matters.

Roared on by The Rec, Bath put the squeeze on and were unfortunate to have a try chalk off for a forward pass.

Just before half-time, safe in the knowledge that another penalty was on the way, Ford slotted a 35-metre drop goal to make it 6-3. 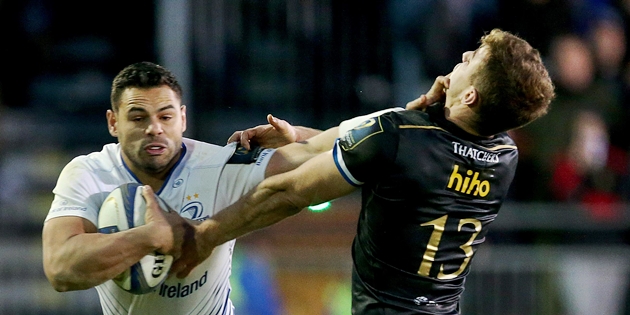 Ford added to that lead with an early second half penalty before Sexton notched his second penalty of the day.

Cullen attempted to shore up the scrum by subbing off Cian Healy and Mike Ross for Jack McGrath and Marty Moore but still Bath dominated the set-piece.

END_OF_DOCUMENT_TOKEN_TO_BE_REPLACED

Sexton had a missed drop goal effort, on 54 minutes, but took the second cherry bite with a penalty to make it 9-9.

The scrummaging coup-de-grace arrived after 61 minutes when Leinster, reeling on their own line, conceded a penalty try. Ford converted and the Blues were seven points adrift going into the final 15 minutes.

With Leinster looking down and out, they rallied to spear into Bath's left flank. Drawing men in, replacement flanker Josh van der Flier powered over despite the close attention of two opponents.

Sexton levelled matters at 16-16 but missed a 73rd minute penalty that would have edged his side ahead.

Ford made no mistake with his penalty, on 76 minutes, and Leinster were left stunned.


popular
Nigel Owens on most annoying players to referee (three of them are Irish)
"I trained with a guy that was born in 2004 the other day. We reckoned Earlsie could be his father!" - Peter O'Mahony
Six All Blacks but no Ireland players in world's top 20 list headed by Antoine Dupont
Longford GAA movie explores the tale so many young footballers can relate to
What is the story with Tyrone clubs' woeful record in the Ulster championship?
"I asked one question and lads slagged the arse off me!" - Johnny Sexton on Roy Keane chat
"I remember someone saying, 'This guy's the best of the lot of them. Just wait for him'" - Brian O'Driscoll
You may also like
1 week ago
"Let's just say the truth - Connacht hate Leinster so much" - Darren Cave
1 week ago
Ulster make massive statement as they out-gun Leinster in Dublin
3 weeks ago
Felipe Contepomi on how dual playmakers can wreak havoc on Test defences
1 month ago
Westmeath minor and Leinster u20 star Fionn O'Hara signs for AFL club
1 month ago
"Where Johnny Sexton is so important to us now is being able to pass the baton"
1 month ago
"I'd love to finish on home soil but I can't see it. I won't be playing in the next Six Nations"
Next Page