Larmour squeezes into Leinster's team of the decade

It’s been Leinster’s decade and we’ve all just been a part of it.

3 Heineken/Champions Cup titles, a Challenge Cup and 4 league titles to show for the 2010s, while the sponsors and tournament names have changed, Leinster’s success over the past 10 years has been unerringly consistent. When a team wins so regularly over the course of a decade, picking a best 15 can be incredibly difficult… But it’s Christmas, so what the hell.

There are two eras of Leinster within the 2010s; the Michael Cheika inspired and Joe Schmidt led early period of dominance (both in Europe and domestically), followed by the Matt O’Connor destruction and subsequent Leo Cullen revival epoch that sees them in a good position for a second double in three seasons. Some players come from one, some from the other, and some even spanning both.

END_OF_DOCUMENT_TOKEN_TO_BE_REPLACED

He held the jersey for the majority of the decade, losing out at times to injury and at others to Jack McGrath’s bursts of form, but there’s only one man you want packing down at loosehead in a blue jersey; and he’s still doing it. Cian Healy has had his brushes with rugby mortality, a nasty ankle injury on the Lions tour in 2013 and a career-threatening neck injury both threatened to derail his career, but he continues to hold the 1 jersey (green and blue) with an iron grip and has apparently no intention of letting go.

This one was a coin toss, especially considering just how explosive Sean Cronin has been off the bench for Leinster and Ireland in recent years, but how could you ignore Richardt Strauss' contribution to Leinster's dominance in the early part of the decade. While Cronin often came off the bench and stole headlines in that period, Strauss was the glue in the front row that Leinster needed to tie their whole game together. Couldn't not be named in this side.

END_OF_DOCUMENT_TOKEN_TO_BE_REPLACED

Another very, very tight call. Mike Ross was an absolute stalwart for Leinster until his retirement just over 2 years ago. Ross also played a huge role in developing Furlong, and his top-class scrummaging for Leinster after arriving at Harlequins was crucial in Leinster’s movement from nearly-rans to perennial champions. What wins out for Furlong is that he is easily considered among the best in his position in the world, recognised in his three Test starts for the Lions against the All Blacks in 2017. It’s quite possible he’ll be making the team of the decade for the 20s as well…

Poor Devin Toner. Dropped at the last hurdle before Japan, and perhaps even more devastatingly, he just misses the cut here too. It’s hard to look past Leo Cullen in the position, considering the leadership shown as captain through such a huge period of change  in the province as they moved towards the Heineken Cup for the first time in 2009 and then maintaining the hunger to push on in the ensuing years. The first ever player to captain a side to three European cups, Cullen retired in 2014 as a player before then returning as coach soon after. You can’t lift that many cups and not be included in the team.

END_OF_DOCUMENT_TOKEN_TO_BE_REPLACED

It’s rare you make a team of the decade having only played for two and a half years out of the 10… But then again, it’s even rarer to make your senior debut for Leinster in a Munster jersey. James Ryan does things his way. He’s catapulted himself into the 5 jersey in recent seasons, to the point that it’s hard to remember what Leinster did without him. Rumour has it that they’re considering renaming the Man of the Match award at the RDS to the ‘James Ryan Award’, just to save everyone a little bit of time. Puts in an incredible shift week in, week out and is already being touted as a future Irish captain… at the age of 23.

Can you ignore a man who started both the 2011 and 2012 finals? Can you ignore anyone who played the way McLaughlin did through those opening years of the 2010s, unerringly consistent and constantly raising the standard of the pack when so many young lads came through? The backrow almost picked itself bar 6, and there are some notable absentees here, but McLaughlin's key contributions in key games cannot be ignored. Even if the 2011 final didn't quite go the way he would have wanted.

Josh van der Flier can feel very hard done by, and this writer is a massive fan of the monster in the red scrum cap, but Sean O’Brien lorded it over defences for so many periods this decade that it’s hard to look past him. Somewhat blighted by injuries, and robbed of his chance at a final World Cup this year by one, O’Brien was untouchable on his day and completely unplayable. His three starts on the 2017 Lions Tour of New Zealand emphasised that, particularly when you consider his being named European Player of the Year 6 years previous in 2011. A tough call, but the right one.

Ever-dependable, ever-reliable, ever-present. Jamie Heaslip owned the number 8 jersey throughout the majority of this 10-year period, with the incredible rarity of his absence from the side (barring international appearances) being even more noteworthy than his reliability at the back of the scrum. Never shirked from the hard work, a brilliant leader on the field and a huge loss for Leinster and Ireland when he never made a comeback from an injury picked up in 2017. You’d want no one else anchoring the pack than Heaslip.

Tough call to be made here, but Reddan made the 9 jersey his own within a couple of years of arriving from Wasps in 2009, starting both the 2011 and 2012 finals. Not only a strong choice at scrum-half, Reddan was a trusted lieutenant of Joe Schmdt’s at both Leinster and Ireland and regularly considered part of the “leadership group” within both sides. Having won another Heineken Cup at Wasps, as well as a Challenge Cup and two Pro 12 titles with Leinster, he edges out competition from Luke McGrath and Isaac Boss to take his place on this team.

Ah come on, was there ever any doubt? Stretching back to the end of the previous decade with a peerless performance off the bench early on against Munster in that Heineken Cup semi-final that really sparked the Sexton-O’Gara rivalry, through the miracle turnaround against Northampton and a Man of the Match performance in the 2011 decider right through to the present day, Sexton continues to spark Leinster’s entire attack. Even a brief vacation to Racing 92 in the midst of this period can’t really taint the gloss he has added to the Leinster machine in the 2010s. The first name on the teamsheet.

It’s a testament to the man that he was in with a shout across a number of positions in the backline, and forever a source of frustration that one international cap in his homeland of Fiji precluded him from wearing green. Exited the RDS in 2013 after winning the (then) Pro 12 title and headed to New Zealand, before answering the call again in 2015 and returning to the eastern province. While many fans had misgivings about this re-signing, the adaptable back proved everyone wrong in a couple of stellar sign-off seasons, most notably taking over the crucial kicking duties in the final minutes as Leinster won the Champions Cup in 2018 against Racing 92 in Bilbao. Isa. Isa. Isa.

While Robbie Henshaw’s arrival from Connacht finally plugged the gap left by D’Arcy in midfield, he was often an unsung hero while O’Driscoll (rightly) stole the headlines. Incredibly consistent for Leinster and Ireland until his retirement halfway through the decade. Saw, and was an instrumental part, in Leinster’s incredible success in the early years of the 2010s, and rightfully takes his place in this team.

Similar to Henshaw, Garry Ringrose has been an incredibly crucial part of Leinster’s resurgence in the past few years, with plenty drawing comparisons between himself and O’Driscoll, but there’s only one of the man himself. Handing the captaincy over to Leo Cullen in 2008 freed him up somewhat, and he was instrumental in Leinster finally getting over the European line in 2009 before kicking on in the intervening years. The decision for “one more year” allowed the eulogising to take place throughout the season, and while his final game (the Pro 14 Final in the RDS) ended prematurely with injury, he lifted the trophy with Cullen in a fittingly cyclical moment. Ireland’s greatest ever rugby player and a shoo-in here.

Stick with me on this one. Yes, he only made his full Leinster debut in 2017, but he was in the Irish squad just months later. His ability to play across a number of positions, coupled with having to oust a couple of stalwarts in order to play, means that we haven’t seen as much of him as perhaps we should have, but still. His footwork has never really been seen by another Irish player, his ability to break games is unrivalled and he’s frankly one of the most exciting talents we’ve seen this decade in the country, let alone the province. Coupled with the stuttering nature of Luke Fitzgerald’s career, and the general dependability of Dave Kearney/Fergus McFadden, Larmour has wedged himself into this team, and deservedly so.

He may as well have had the number 15 tattooed on his back for the entirety of this decade. An absolute mainstay at fullback across the last four Leinster coaches, Kearney managed to even belie the idea of versatility so espoused by Schmidt as both Ireland and Leinster Head Coach. One of the old guard who managed to guard his spot at rearguard from the new guard coming through with relative ease, with a number of challengers threatening the throne at times, but Kearney always seemed to rise back to the top of the teamsheet. Dependable under the high ball, defensively never putting a foot wrong and even a couple of incredible left-footed drop goals thrown into the mix. Easy choice. 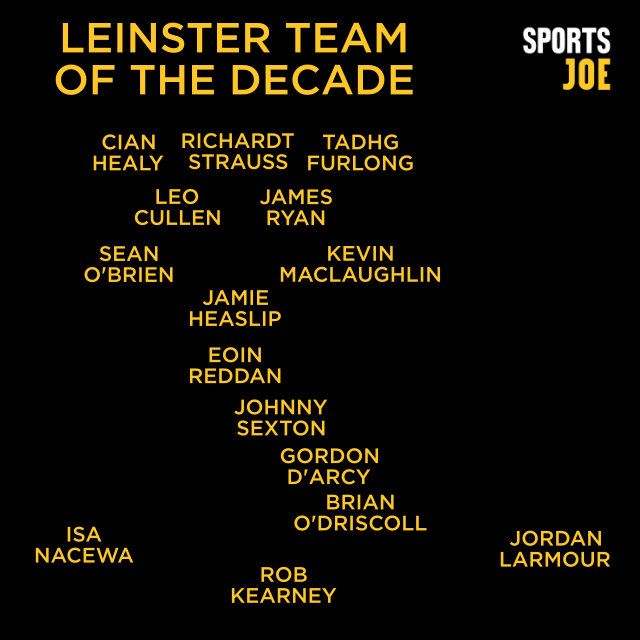 
popular
Frank Lampard reveals details about season-changing conversation with Seamus Coleman
'ROG isn't that sort of guy' - Brian O'Driscoll on first Ronan O'Gara encounters
Cutting through the contradictions from one of the worst television segments of the year
Aiden McGeady details the abuse he suffered after playing for Ireland instead of Scotland
Erik ten Hag orders full report on every Man United player ahead of pre-season
Pitch-side microphone picks up Eric Dier joke about Mo Salah
Mohamed Salah confirms he will remain at Liverpool next season
You may also like
4 days ago
Alex Kendellen takes exception to Harry Byrne reaction to lusty tackle
1 week ago
French media rave about Caelan Doris and 'Playstation rugby' from Leinster
1 week ago
Somehow, we all may have underestimated Johnny Sexton
2 weeks ago
James Lowe calls on Leinster fans to give Toulouse fans red-hot welcome
2 weeks ago
"We’ve been led by the experts" - James Ryan ready to rock against Toulouse
2 weeks ago
Stuart Barnes believes Jamison Gibson Park 'best No 9 in this hemisphere' right now
Next Page