What you hear at a Leinster vs. Munster match with no fans around

Some throat lozenges were surely needed after this one.

Lots of shouting, a heap of encouragement, gentle goading and both benches doing their best as cheerleaders. Professional rugby returned to the Aviva Stadium this weekend and there were a whole load of takeaways.

Saturday night of a Leinster versus Munster game in Dublin and there are a raft of free parking spots on Lansdowne Road. That and the welcome lack of traffic are the first things that stand out as I get to the ground in plenty of time for the resumption of the 2019/20 Guinness PRO14 season.

END_OF_DOCUMENT_TOKEN_TO_BE_REPLACED

Media members, aside from eir Sport [TV] and RTE [radio], only got the heads-up last Friday that they would be permitted at the Aviva Stadium for the interprovincial games between Leinster, Munster, Connacht and Ulster. Government confirmation on the extra numbers allowed came through that morning and 20 rugby reporters got to join the others already cleared to attend rugby's return to these shores.

There were health questionnaires, forms to fill out and temperature checks as well as a new entrance to the stadium opened up and instructions to use the stairs, rather than elevators, to get to your designated seats. If you wanted grub, you had to bring it yourself. Masks were mandatory in the media tribune and everyone was advised [beyond calls of nature] to stick to their seats. 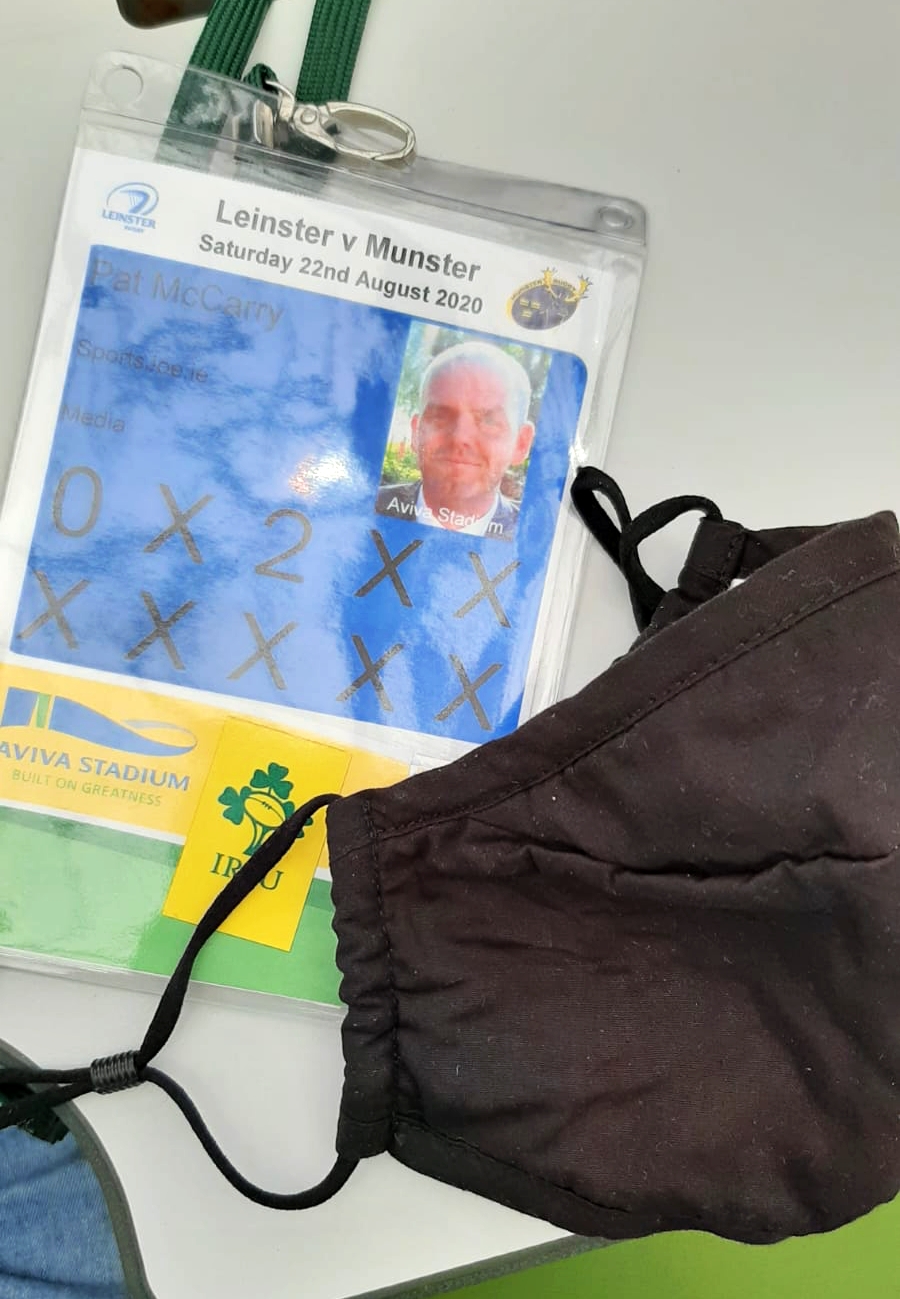 Headphones on, Scott Fardy was the first player from either side to hit the pitch and get his bearings with the place. With no Captain's Runs taking place at the ground, players from both sides all filtered out eventually and, makes on, scoped the place out. The out-halves lined up kicks while the coaching staff placed markers on their respective sides of the pitch.

END_OF_DOCUMENT_TOKEN_TO_BE_REPLACED

The pre-game warm-ups reflected how many would see both sides. Munster's was a more raucous affair, with lads heaving and thwacking into each other and a lot of noise generated. Leinster went through their motions in a more sedate manner with each player getting a feel for the ball.

The entrance of Munster to the pitch came as a surprise. With no fanfare, music or cheering from fans, Peter O'Mahony led his side back onto the field to an eerie silence. A few souls near the pitch, sensing how odd the situation was, offered up some almost apologetic applause. Leinster, as the home side, were afforded a bombastic entrance due to the stadium announcer and Guns N' Roses 'Welcome To The Jungle' blaring out over the PA system.

Both sides lined up in tribute to the frontline workers that have merited such actions for their work during the Covid-19 pandemic. They then formed a circle - Munster players abreast with Leinster rivalries - as Irish rugby's gesture of solidarity in the fight against racism. 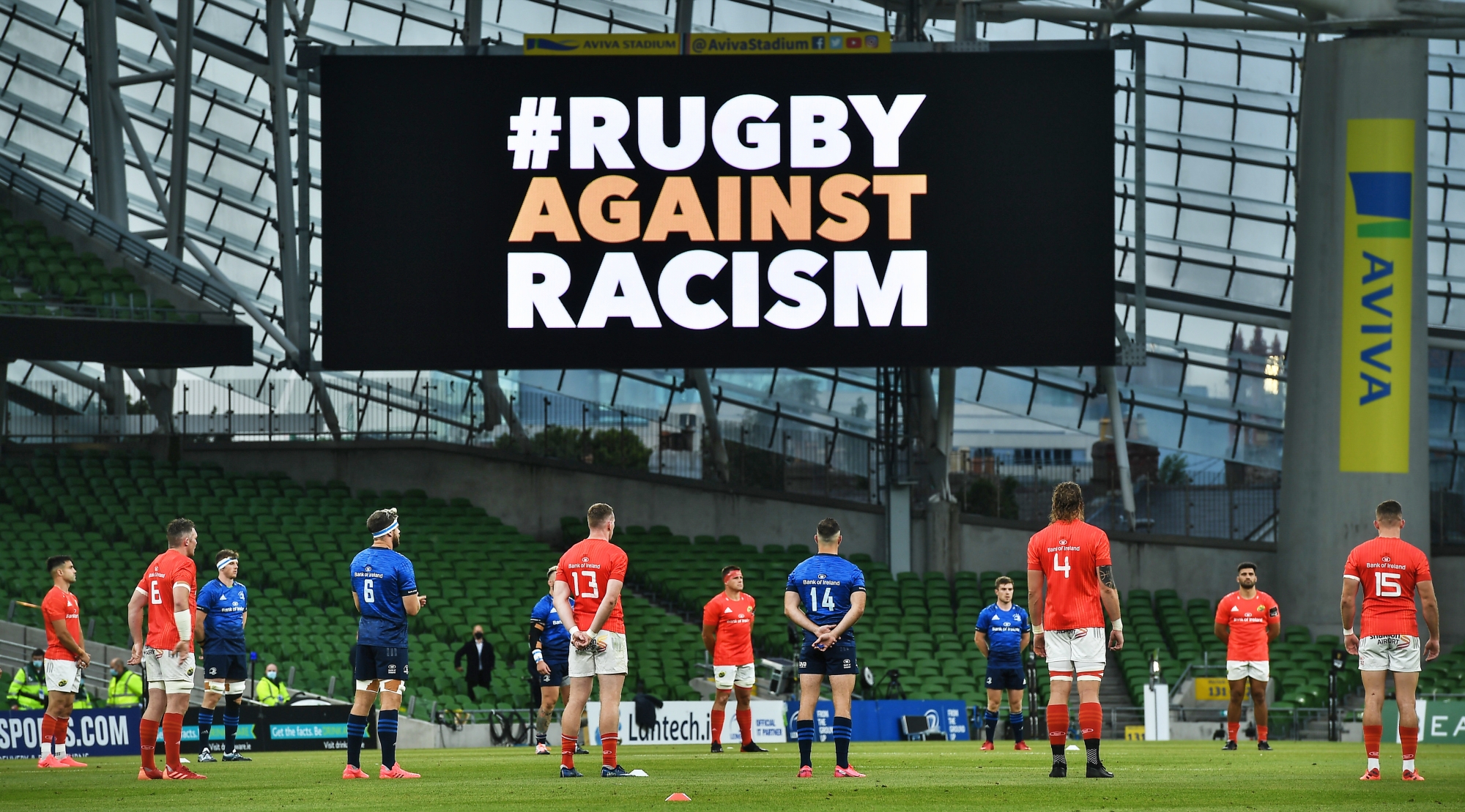 Players from both sides observe a moment for Rugby Against Racism prior to the Guinness PRO14 Round 14 match between Leinster and Munster at the Aviva Stadium in Dublin. (Photo by David Fitzgerald/Sportsfile)

END_OF_DOCUMENT_TOKEN_TO_BE_REPLACED

The early running was made by Munster and they were the most vocal, on and off the pitch. You can often hear CJ Stander's voice above the din of sell-out Ireland games at this stadium, so he was coming through in stereo on Saturday evening. "RG! Big one RG. Big one!"

Stander was geeing up RG Snyman in those opening minutes and Munster were trying to get the big lock into the game early. He was sent after Jordan Larmour from the kick-off but the kick went slightly too long and the Leinster fullback avoided his tackle attempt. The World Cup winner packed down at tighthead and locked solid there.

Snyman's best moment of the game was also his last involvement - a lineout steal followed my an awkward landing that did for his game, and could yet end his season. To make matters worse, Dave Kilcoyne left the field at the same time and showed up on the bench, later, masked up and in a moon-boat.

Any supporters that selected the option to listen to the match without crowd noise may have been taken aback at how much shouting and instructing that goes on during a game. The wingers and fullbacks are letting the forwards know how plays are working out, teammates are screaming encouragement and plays are being called on the hoof.

Whenever Munster broke into the Leinster 22, you would hear the cries of, "CHOP TACKLE! CHOP TACKLE!"

As the intensity of the game ramped up, it was a wall of noise. 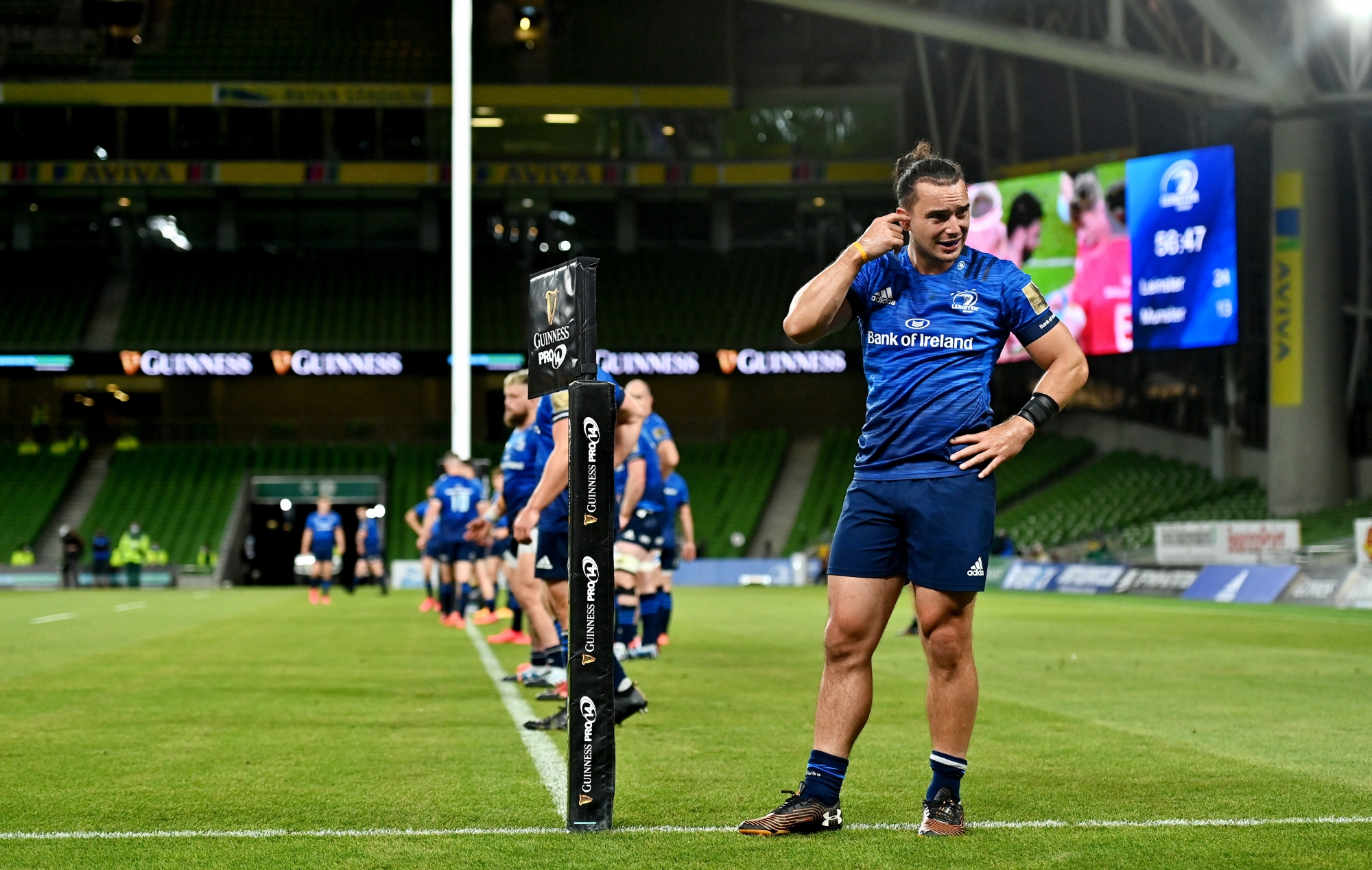 James Lowe of Leinster during the Guinness PRO14 Round 14 match between Leinster and Munster at the Aviva Stadium in Dublin. (Photo by Ramsey Cardy/Sportsfile)

Munster, despite their injury woes, shaded the first half only to go in behind after conceding a try to Garry Ringrose in the final play of the game. Throughout the game, their bench was louder when the big plays and turnovers transpired.

Leinster loosehead Ed Byrne, who replaced Cian Healy in the second half, spoke with us about the replacements essentially being cheerleaders for the first XV.

"It's just trying to give the players that energy on the pitch. There might also be little things that we see and they don't, as they're so focused on the play. There is definitely some of that, as well as trying to celebrate the good moments and give the players energy. We knew how tough the first game back was going to be, so just trying to create that energy ourselves... There was a bit of an onus on the bench to give those players a lift on the pitch."

Celebrating the big moments is something Leinster and Munster certainly had ramped themselves up for. "That's it CJ! That's it!" came the cry after one of Stander's many breakdown turnovers with the back slapped off the lad.

Johnny Sexton grew into the game as it progressed and he got into it with Damien De Allende on a couple of occasions in the first half. After Leinster turned over Munster ball, not long before James Lowe's try, Sexton shared some choice remarks with the South African centre. Sexton often uses these moments as fuel and his pass to take out Chris Farrell and Andrew Conway - for that Lowe score - is another example of the Leinster No.10 walking the walk.

From a journalistic point of view, I was thankful for that score that there were TV replays available at my desk. The lack of crowd noise meant I had my head planted in my laptop when Leinster broke from their scrum to plunder forward with that Lowe try. With no roars to alert me, I looked up to see Ryan Baird put Lowe away but missed the Sexton magic as it happened. A lesson learned to pay more attention when there are no cues about.

Keith Earls and Andrew Conway grabbed tries to give Munster hope and Stander was still out there swinging a big bat, and giving the bench something to holler about.

Leinster came up big in the final moments, though, and we were left with the damp squib ending of Craig Casey kicking the ball out of play with Munster trailing 27-25.

Even had a crowd been present for that moment, there would have been little to cheer about. Both sides bumped elbows on their way off as some of the wounded hobbled back onto the pitch to congratulate and console.

No fans, very little noise but two teams giving it their all. Expect them to do it all over again, for the semis, in a fortnight.


popular
QUIZ: How many of the 10 most successful football counties can you name without making a mistake?
Conor McGregor and Floyd Mayweather 'in talks' about a rematch
Éamonn Fitzmaurice explains Aidan O'Shea's best position and how it can be used against Kerry
Matt Le Tissier says he asked Sky Sports why they never sacked Jamie Carragher
Patrick Vieira claims he was 'much better' than Roy Keane in new interview
Steve McClaren issues warning to Man United players
Two All-Ireland quarter-finals to be streamed exclusively live on NOW
You may also like
3 days ago
Stormers' Hacjivah Dayimani still celebrating URC triumph in full kit, four days later
3 days ago
"Brave" Harry Byrne backed to lay down World Cup marker in New Zealand
4 days ago
"It's pathetic!" - Romain Ntamack defended after changing room footage criticised
4 days ago
"I just remember the room erupting!" - Nick McCarthy on coming out to his Leinster teammates
4 days ago
Danny Care and Billy Vunipola make 36-man England squad for Australia
6 days ago
"I was never supposed to be here" - Emotional Ellis Genge reflects on Leicester's league triumph
Next Page