Poll: Do you back James Lowe or Jordan Larmour in the absence of Fergus McFadden?

It's pretty remarkable when you think about where Jordan Larmour has come from this season.

He began the season aiming to play for the Leinster A's and maybe get a few games for the province's first team and he'll finish the campaign as a Grand Slam champion with Ireland and possibly as a Champions Cup medalist with Leinster.

Suffice to say, he's exceeded his expectations, but who do Leinster turn to in the absence of Fergus McFadden?

Monday's news that McFadden has been ruled out for the rest of the season with a hamstring injury was a dampener on what has been one of the best campaigns of the Kilkenny winger's career, but as always in rugby, and particularly with Leinster this season, one player's injury is another player's opportunity.

Leinster have no shortage of wingers at their disposal to replace McFadden, and while Adam Byrne and Barry Daly should garner some consideration from Leo Cullen and Stuart Lancaster, if Luke McGrath is fit to play, which Leinster are confident that he will be at this stage, it will most likely be Larmour or Lowe that will be given the opportunity to partner Isa Nacewa and Rob Kearney in the Leinster back three.

The electric 20-year-old has started just one game for Leinster since the end of the Six Nations but he did play the entire second-half of the province's 38-16 drubbing of the Scarlets in the semi-final, in part because Lowe was excluded due to the inclusion of foreign internationals Scott Fardy and Jamison Gibson-Park.

Lowe had an off day against Connacht in Leinster's last outing but he's been exceptional this season, and while he will be the favourite to start, Larmour's talent and explosiveness make him an interesting possibility.

Here's the case for each player:

A leg injury ruled the prodigious 20-year-old out for three games after the Six Nations while he received just 64 minutes during the tournament bringing his minute total to 349 minutes since the end of January.

END_OF_DOCUMENT_TOKEN_TO_BE_REPLACED

He's scored just one try during that time compared to the three tries he scored in four full games of rugby between December and January.

Larmour played nearly just as many minutes of rugby in one month than he has since the start of February, and like most players, he tends to play better when he receives a consistent run of games.

McFadden's injury has created an opportunity for him to start and given that seven of the last 10 finals have been decided by 11 points or less, Leinster could use a player with Larmour's linebreaking ability.

As good as Rob Kearney and Isa Nacewa have been this season, and they have been good, they've scored just four tries between them in 22 games. Larmour has seven scores in 19 games.

Leinster have had such an utterly dominant pack this season that they haven't really been forced to rely too heavily on individual brilliance from their outside backs to turn games for them, but against a Racing team with the best defensive record in the Top 14 this season and the second best defensive record from the Champions Cup pool stages, maybe it's worth including Larmour who has shown at multiple stages this season that he can create tries by himself.

Racing showed for 60 minutes against Munster that they can be incredibly effective at absorbing pressure and slowing down and even turning over opposition ball, while in attack, Teddy Thomas and Virimi Vakatawa will certainly be a handful for Leinster if they can produce anything close to what they offered in the semi-finals.

END_OF_DOCUMENT_TOKEN_TO_BE_REPLACED

It's been a while since Larmour ran amok against both Munster and Ulster, although, that ability to beat defenders with ease certainly hasn't just disappeared.

If the final is tight - which seven of the last 10 finals have been - and if Racing show up defensively - which there's no reason to believe they won't - then maybe you look for that moment of individual brilliance to make the difference.

Leinster have difference makers. They have a team full of them. But if you need one player that is capable of making something from nothing it's hard to look past Larmour.

If you do look past Larmour you'll probably see James Lowe standing there right behind him.

The New Zealander has been exceptional this season and was unfortunate to miss out on the semi-final win over the Scarlets last month as Leinster were forced to start Gibson-Park in the absence of McGrath.

If McGrath returns Lowe should earn the nod to start. As good as Larmour can be, and as average as Lowe looked against Connacht, it's very hard to look past nine tries in 11 games.

The former Chiefs flier has scored four tries in his last five games, and while his finishing has been tremendous, his ability to offload the ball effectively adds another string to an already impressive bow. 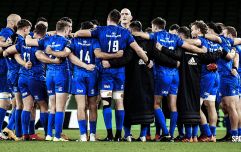 END_OF_DOCUMENT_TOKEN_TO_BE_REPLACED

As touched on earlier, Racing have been a great defensive side this season but well-timed offloads can tarnish the best defences.

Like a number of New Zealand backs, Lowe has a great awareness of those around him and has this ridiculous ability to free the ball from the unlikeliest of positions.

They've been knocking on the door and finally @leinsterrugby get through

Some excellent work down the left is finished off by Max Deegan💥 - make sure you tune in to @TG4TV#GUINNESSPRO14 #LEIvCON pic.twitter.com/sCC9BBLJue

🔵 Seconds into the second half and @jameslowenz is at it again! 😲

It's hard to see Leinster going too far wrong with either player but Lowe's strike rate and his offloading ability should earn him the nod in what is the province's biggest game of the season and what may well be the biggest game of his career.

A good problem to have for Leinster.

You may also like
3 months ago
Josh van der Flier recalls first Leinster training session with Brian O'Driscoll
5 months ago
Isa Nacewa on two young Leinster players that quickly earned his respect
7 months ago
Sean O'Brien's parting gesture won't soon be forgotten by Scott Penny
10 months ago
Leinster's Ryan Baird included in Ireland training camp squad
1 year ago
'With Johnny, you need to take this seriously and the IRFU need to front up'
1 month ago
The SportsJOE 12 o'clock quiz | Day 276
Next Page