"It's a new dynamic that none of us ever got taught at coaching college!"

As ever, Leinster head coach Leo Cullen can locate a wry remark to sum up a crazy situation.

It has been a topsy-turvy year for Leinster Rugby - like most of us - but Cullen's side have managed to claim a Guinness PRO14 title along the way and start off their title defence in winning style. The wider world is pressing in, however, and two of their league games this 2020/21 season (Scarlets and Munster) have already been postponed.

Now, after the squad broke away for a short Christmas break, two members of the senior squad have tested positive for Covid-19. A release from Leinster reads:

'Leinster Rugby are assisting two senior players who have tested positive for Covid-19. One player was tested outside the PCR testing window, after feeling unwell, and is now self-isolating.

'Further PCR testing was carried out at Leinster Rugby yesterday morning on 104 players and staff and 103 tests returned negative results with one senior player testing positive and he is also self-isolating. A number of close contacts of the two players have been identified and these players are also self-isolating.' 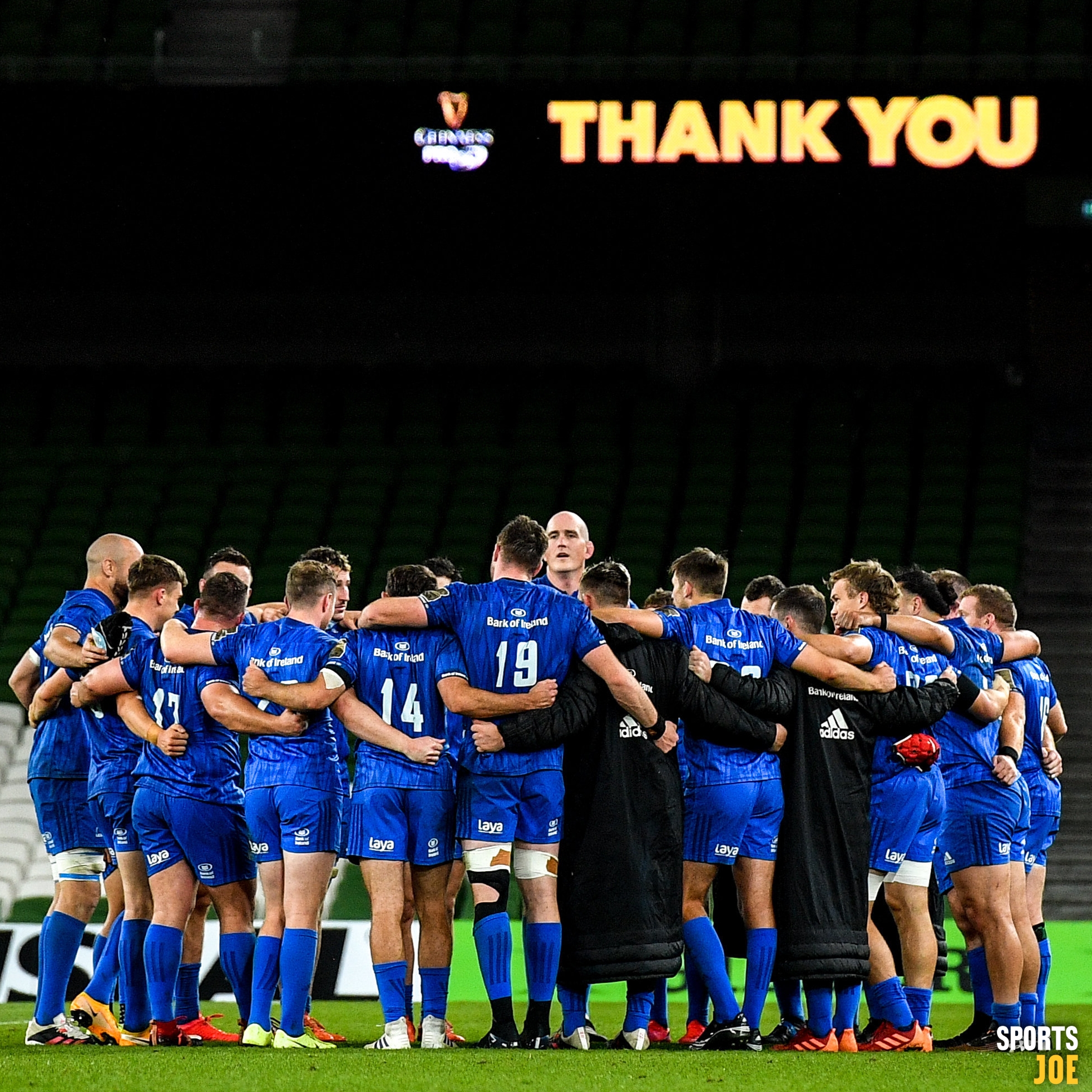 The Leinster team huddle following a win over Munster at the Aviva Stadium, in September. (Photo by Ramsey Cardy/Sportsfile)

Asked about that close contacts line in the release, Cullen confirmed he expects to be without a few more of his senior squad for Saturday's home game against Connacht. He commented:

"Sometimes a close contact is a friend, family member or staff member that a player could have been in contact with. So, we have to be very, very careful about who we hang out with these days! So, yeah, it's a very tricky time."

Cullen says the senior squad are returning to training today having not been together since before Christmas. Their St Stephens' Day league clash with Munster was postponed after some players initially tested positive for Covid-19, only to come back negative after re-tests.

"It was the correct decision to make," he said of the postponement. "You could have played on but there was still so much uncertainty. Covid is very much prevalent, at the moment. We are all reading and hearing about it, on a constant basis. So the welfare of all the people involved here - staff and players - (is considered)...

"We tested yesterday. This is our first day back in the building and the player that was tested [on Monday] is isolating at home. So we'll truck on again and get ourselves ready for Connacht."

END_OF_DOCUMENT_TOKEN_TO_BE_REPLACED

In better news for the province, tighthead Tadhg Furlong is increasing his training load with a view to a comeback in 2021. Furlong has not played since rugby resumed, back in August, but there is light at the end of the tunnel.

"Yes, you will hopefully see (Furlong and Johnny Sexton) in the next few weeks," said Cullen, "which is a positive. Some of the national guys will get a break at this time of year anyway... some guys were going to be off last week and this week, anyway, so that plan hasn't changed."

"Tadhg is making steady progress," Cullen added, "so hopefully there will be some involvement in team training this week. And, hopefully, that gets him a bit closer to a return."


popular
Rob Kearney taught a classic GAA lesson when he tried to have the craic in second game back
Shane Lowry had no problem setting reporters straight at Ryder Cup briefing
The scenes in Newbridge as the biggest hit and hope ever knocks Moorefield out
Conor McGregor nearly hits Chicago Cubs fan with wild first pitch at Wrigley Field
Kieran McGeary on his relationship with Mickey Harte and his role in Tyrone's success this year
'Solskjaer has started the new season the same, so why would you expect a different result?"
When Liam Brady lit into Brian Clough for his dismissive Mick McCarthy comments
You may also like
3 months ago
Lions coach heaps praise on "outstanding" Ronan Kelleher ahead of Japan Test
4 months ago
Tadhg Furlong, playing with all the chips, doesn't flinch at World Cup question
4 months ago
Leinster run out of steam as Ronan O'Gara's La Rochelle reach Champions Cup final
4 months ago
One more outstanding game and Jack Conan could be a Lion
5 months ago
Madigan, McFadden and Henry on one game they'd change if they could go back
5 months ago
Rating the chances of Leinster's 16 Lions hopefuls
Next Page