"Their D.N.A is not going to change."

Warren Gatland broke into a smile as he recalled the immediate reactions of Robin McBryde and Steve Tandy to being named as British & Irish Lions coaches:

TANDY: 'Oh my God, I'm shaking at the knees, I'm just so excited'

MCBRYDE: 'I don't know what to do with myself!'

END_OF_DOCUMENT_TOKEN_TO_BE_REPLACED

Having missed out on Andy Farrell and Graham Rowntree, his old Lions lieutenants, Gatland was perked up by the positivity and enthusiasm Tandy, McBryde and Gregor Townsend brought to their conversations.

While the coaching mix is 60% Welsh, 20% Scottish and 20% New Zealand [in Gatland], there is some Irish interest there as McBryde is the current scrum coach with Leinster.

He knew, heading into Saturday's Champions Cup quarter final with Exeter Chiefs that he would be heading on the Lions Tour to South Africa but he parked all thoughts and focused on the task at hand. As it transpired, the Leinster pack were more than a match for Exeter's hulking and much-vaunted unit. Another feather in McBryde's cap.

END_OF_DOCUMENT_TOKEN_TO_BE_REPLACED

McBryde and Gatland worked closely when they were both in the Wales coaching set-up. When the Kiwi headed back home, McBryde took up a job with Leinster.

In terms of forwards should be able to call on the likes of Tadhg Furlong and James Ryan, this summer, and possibly Andrew Porter, while a back row operator like Caelan Doris, Josh van der Flier or Rhys Ruddock could make the cut.

Three more Leinster forwards suddenly find a strong voice in the selection chat. Cian Healy could yet make his second Lions Tour [after Australia in 2013], Ronan Kelleher is generating chatter and Ryan Baird could be a versatile bolter.

There will be a strong mix of nationalities after a Six Nations in which Wales captured the crown, England suffered and both Ireland and Scotland had ups and downs.

Looking ahead to the challenge of preparing a Lions pack to take on the world champion Springboks, McBryde teed up a tantalising contest:

"It's something the pack should really look forward to and embrace it - that challenge of going up against arguably the best pack in the world.

"And it's not just the starting eight. We saw during the World Cup how they use that bench - The Bomb Squad, as they call it - to come on.

"The last time we [Wales] coached against them was in a semi-final and then England in the World Cup final was their last game. I don't think their D.N.A is going to change. There's still going to be physical confrontation up front.

"We've got to embrace it, and be smart about it. We'd be foolish to think we're going to go in there and go toe-to-toe for 80 minutes. We need to have a good balance and variety in our game. On some occasions, we will have to go toe-to-toe but we have to be smart and play to our strengths." 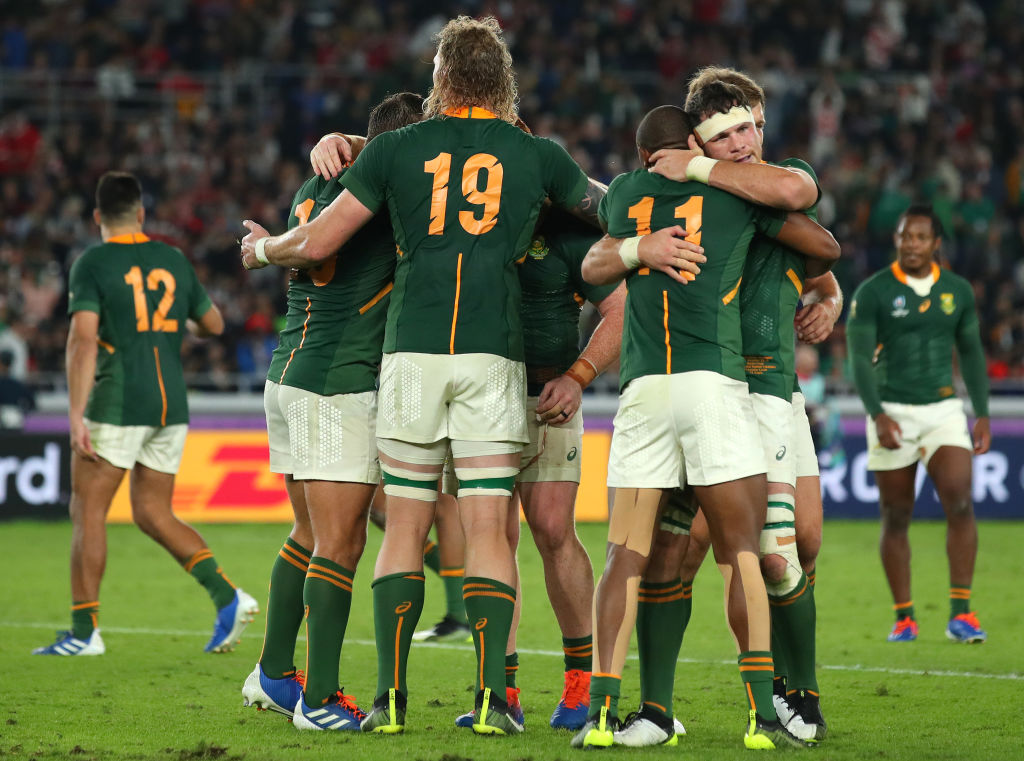 RG Snyman and Francois Louw were two subs that formed part of South Africa's 'Bomb Squad' of six forwards on the bench at the 2019 World Cup. (Photo by Cameron Spencer/Getty Images)

South Africa are 528 days removed from winning the 2019 World Cup and have yet to play a Test match. Several of the players Rassie Erasmus and Jacques Nienaber will ultimately select are involved in club rugby abroad but a big chunk of the likely squad have been spinning their wheels back home.

McBryde does not believe that will be too much of a disadvantage to the Springboks, and he would not be surprised if they get in a warm-up match or two before the Test Series comes around.

Back with his Leinster hat on, the minute he arrives back in Dublin, McBryde will switch his focus to getting his team ready for the monumental challenge of facing La Rochelle on their home patch.

"I'd like to park this Lions honour for now, and put it to one side," he says. "I've got to focus on what's in front of me and make sure we finish off this season properly with Leinster, because we've got the opportunity to do something special."


popular
The four stone-cold certainties for All-Stars even as early as this
Footage emerges of Erik ten Hag reacting to Man United target Tyrell Malacia
Eamon McGee just couldn't help himself with Armagh-melee tweet
Gavin Coombes one of four Irish players to push themselves into Test picture
Kylian Mbappe reportedly wants PSG to sell Neymar
"He's actually smiling putting the ball over the bar. He should nearly be fainting." - Ryall on Limerick's legacy
"The economy was one of the big reasons" - Cadogan's move from an electrician to personal training
You may also like
6 hours ago
Bundee Aki understandably emotional, as Ireland pay moving tribute to late Sean Wainui
7 hours ago
Full Ireland player ratings after Maori All Blacks teach us an early lesson
23 hours ago
"We could lose all five games" - Darren Cave with a rare take on Ireland's chances
1 day ago
Irish provinces discover their pool stages fate for Champions and Challenge Cups
1 day ago
Mike Lowry and Peter O'Mahony in First Test contention as Ireland shuffle deck
1 day ago
"Significant" knee injury ends Iain Henderson's tour of New Zealand
Next Page